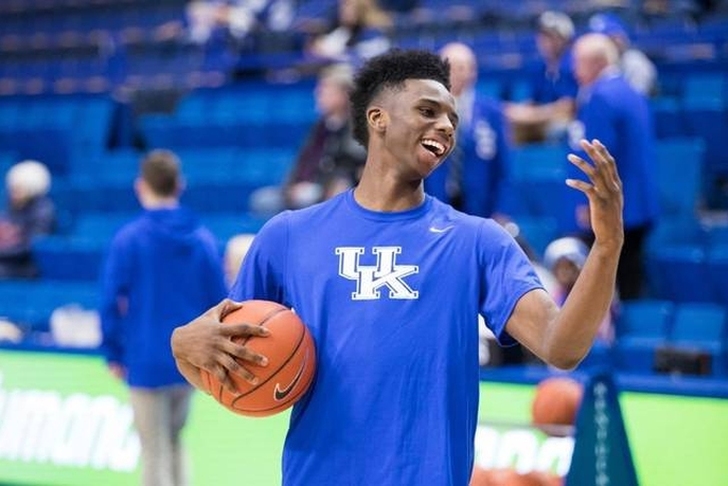 The 2017 NBA Combine officially kicked off on Tuesday, and prospects will interview with teams and undergo athletic testing with live-action drills on Thursday and Friday (televised on ESPN2). That leads up to the NBA Draft Lottery next Tuesday, and as a result, the draft rumor mill is kicking into high gear. Here are all the latest rumors you need to know:

Hamidou Diallo may have a first round guarantee
Diallo's journey to the NBA Draft is complicated. After technically graduating from high school in spring 2016, he left prep school after the fall semester and enrolled early at Kentucky. He never played for the Wildcats, but was still eligible to declare for the draft (one year after high school graduation).

Many were expecting Diallo, a top 10 prospect in the 2017 recruiting class, to test the waters before returning to Kentucky, but that may not be the case anymore.

According to Adam Zagoria of ZagsBlog.com, the Brooklyn Nets, Dallas Mavericks and Indiana Pacers are all very interested in Diallo - and one of them may have given him a guarantee that they will pick him in the first round if he's available.

The Mavs, Pacers and @BrooklynNets have recently checked in with AAU coaches of UK G @Diallo1Hamidou. Nets have multiple picks.

Unclear at this point if he has a 1st-round guarantee but it only takes one team as they say. https://t.co/lXtYgTwC58

The Mavs are likely interested in Diallo if he falls to the second round, but the Nets and Pacers interest comes late in the first round. Brooklyn holds the No. 22 and No. 27 overall picks, and they're looking for high-upside prospects who could provide value. Indiana holds the No. 18 overall pick.

De'Aaron Fox says he's the best defensive guard in the draft
Moving onto another Kentucky point guard, De'Aaron Fox is participating in the combine while many other top prospects are not. He had a simple reason for that:

"Ever since I was younger, I've always wanted to go to the combine," Fox told ESPN's Chris Haynes. "It's a part of the draft process so I've always pictured myself going. Some guys don't go but for me, I just wanted to be there."

Fox told Haynes that he knows he's ranked behind Washington's Markelle Fultz and UCLA's Lonzo Ball, but believes he's a better defensive player than them - and every other guard in the draft.

"Defensively, I feel like I'm definitely the best guard in the draft," he said. "I'm confident in myself. For me, it's not about offensive scoring, I want to shut the other guy down."

TRENDING: Lakers have four targets if they keep their top-three pick

Bucks targeting shooting in first round
The Milwaukee Bucks have placed an emphasis on drafting prospects with length in recent years, and the result is them having one of the best defensive teams in the league due to that size and length.

However, they largely lack perimeter shooting, and general manager Rick Hammond told the Milwaukee Journal Sentinel that is an area they plan to address with the No. 17 and No. 46 picks in the draft.

So what is Hammond looking for in this year's draft, which is expected to be his last as Bucks general manager before assistant GM Justin Zanik takes over next year?

"Shooting," Hammond said. "It's interesting — I think we've said this before — but I think you probably can go around to the other 29 teams in the NBA and you start saying, 'If we can add one thing, what would it be?' Most everyone needs shooting. The object of this game is still to put the ball in the basket. If you can put the ball in the basket, even with range, better yet."

Milwaukee ranked 24th in the league in three-pointers attempted this past season, but did shoot them at a 37 percent clip (10th in NBA).