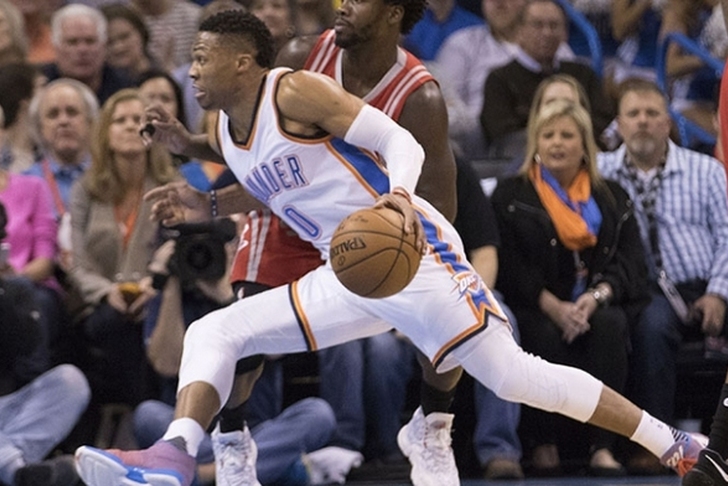 We had a nine-game schedule in the NBA on Friday night, headlined by the Cleveland Cavs' third straight win in a 114-106 triumph over the Detroit Pistons. For the first time this year, the Cavs' big three of LeBron James, Kyrie Irving and Kevin Love all chipped in at least 20 points.

On the undercard, the Oklahoma City Thunder's 116-108 win over the Houston Rockets was keyed by Russell Westbrook's sixth triple-double of the year (26 points, 14 assists, 10 rebounds) and third in the team's past nine games. OKC has won ten of eleven. More on yesterday's NBA games in our Chat Sports iPhone and Android apps!

There are seven games on the slate for Saturday, with a couple of marquee matchups to look out for. Let's get you ready with our game preview capsules.

The Warriors have won five straight by an average margin of 25.4 win, including wins over Cleveland, San Antonio and Chicago. Philadelphia has been respectable in the wake of an awful 4-37 start, alternating wins and loss over their past six games.

Toronto is looking for a franchise-record 11-game winning streak, while Detroit is opening up a pivotal three-game road trip as they look to gain momentum closing in on the All-Star Break.

The Pacers have been frustratingly inconsistent for weeks now, although they broke a 1-5 stretch with a big 111-92 win over Atlanta on Thursday. Denver bucked a 1-4 stretch with a 117-113 win over the Wizards the same night.

New Orleans has looked fantastic in winning six of eight, but they'll be going with Anthony Davis and Tyreke Evans for an undetermined length of time due to injury. Brooklyn is coming off a season-worst shooting performance in a 91-79 loss at Dallas Friday, hitting just 35.9 percent from the field and 20% from beyond the arc. More on this matchup in our Chat Sports iPhone and Android apps!

Houston is coming off road losses to two of the West's best teams (San Antonio, Oklahoma City), but they've got a chance to get back some momentum against a Washington side that's lost five of six.

The Kings' hopes for the West's #8 seed have taken a dip with three straight losses, and it'll take a gargantuan effort to snap a 10-game losing streak in Memphis that's finally starting to score with consistency.

ABC's second Saturday showcase is a doozy between the #2 team in the West and #1 team in the East. Cleveland has won three straight since getting run out of their own building by Chicago in Tyronn Lue's coaching debut. San Antonio has won 14 of 15, but will be without Tim Duncan for a third straight game.

LeBron James says he's never "undermined" a head coach in his time as a player, despite reports that he was the main factor in former Cavs coach David Blatt's firing.

The aforementioned LeBron James reached a milestone in the Cavs' win over the Pistons Friday night, hitting the 26,000-point mark for his career.