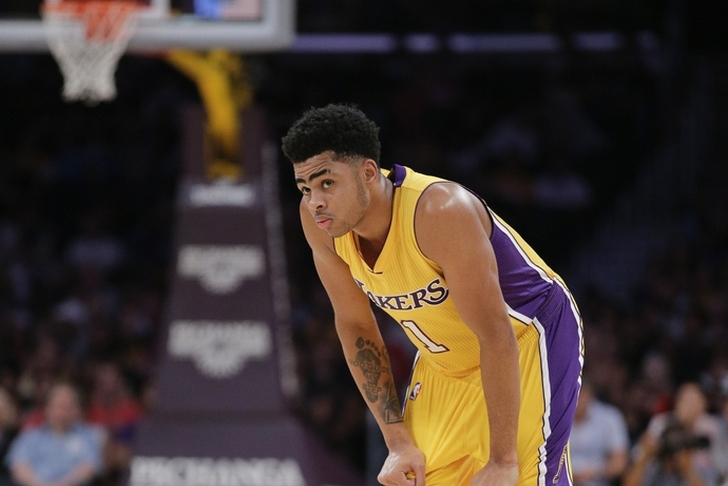 The NBA playoff push is in full swing during the last few weeks of the regular season, and Tuesday night's six-game slate provided us with several crucial games. The Golden State Warriors extended their current home win streak to 54 games - the longest in NBA history - with a 102-94 win over the Washington Wizards, while the Oklahoma City Thunder had their eight-game win streak snapped in a 88-82 loss to the Detroit Pistons.

Elsewhere, the Houston Rockets pulled off a 20-point, second-half comeback to beat the Cleveland Cavaliers 106-100.

The story of the day comes from one of the teams at the bottom on the league in the Los Angeles Lakers, as rookie point guard D'Angelo Russell is being "isolated" by his teammates after a video leaked of him secretly filming Nick Young talking about being with other women, according to multiple reports. Young is currently engaged to rapper Iggy Azalea, and the situation has pitted the team against Russell.

There are nine games on the slate today, so let's preview tonight's contests from across the Association.

Phoenix Suns (20-54) @ Milwaukee Bucks (30-44) - 8:00 p.m. ET
Phoenix is missing the playoffs for the sixth straight season, a franchise record, and come into this game on a three-game losing streak. Milwaukee has lost five games in a row.

Los Angeles Clippers (46-27) @ Minnesota Timberwolves (25-49) - 8:00 p.m. ET
LA comes into this game on a three-game win streak, hoping to avenge their home loss to Minnesota earlier this season. The Wolves have won three of their last four games.

New York Knicks (30-45) @ Dallas Mavericks (36-38) - 8:30 p.m. ET
Dallas needs a win to move into a tie with the Rockets for the eighth and final playoff spot in the West. New York comes into this one having lost five of their last seven games.

News And Notes:
Everything You Need To Know About The Nick Young, D'Angelo Russell, Iggy Azalea Saga That Is Tearing The Lakers Apart

4 Teams That Could Trade For D'Angelo Russell