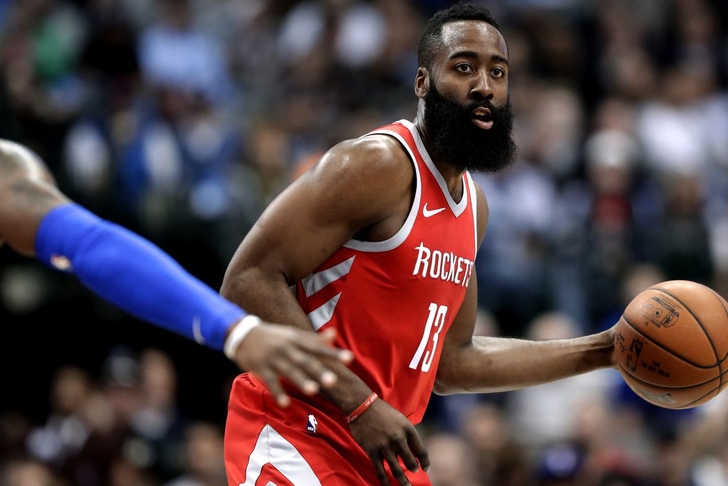 As the 2017-18 NBA regular season wraps up, NBA analysts, writers and bloggers will submit their ballots for the various NBA awards. The NBA season is a long, grueling campaign, and an MVP Trophy or Rookie of the Year award is an accolade that builds a player’s basketball legacy.

This year’s award races such as Rookie of the Year, Coach of the Year or even MVP will go down to the wire. The MVP award, for example, will be a photo finish as Lebron has gone on arguably the best 20 game offensive stretch of his career. Awards are a big part of what makes the NBA so exciting and players, despite their denials, feel the allure of awards and exert extra energy and passion down the stretch as they attempt to bring home a trophy.

These awards are from Chat Sports contributor JJ Zakheim. Our official awards from Brian Rauf will be published soon...

Most Valuable Player:
James Harden - Houston Rockets
Runner up: Lebron James - Cleveland Cavaliers
This was a race that Lebron made close towards the end but has ultimately been Harden’s for a few months now. Harden is leading the league in scoring at 30.6 PPG and has become an unguardable offensive player with a complete offensive arsenal. Harden scores 1.24 points per isolation attempt, which is more than any other team in the NBA. Likewise, Harden added a step-back three to his array of offensive moves, shooting them at an impressive 45% rate, and attempting more than any other team in the league. The Beard, who some would argue has been snubbed of this award in the past, will finally get his MVP trophy.

Coach of the Year:
Brad Stevens - Boston Celtics
Runner up: Quin Snyder - Utah Jazz
When Gordon Hayward went down with a gruesome ankle injury in the first five minutes of the 2018 NBA season, Boston fans immediately began to talk about next season. The Celtics, however, won 16 straight games and Bostonians jumped right back on the bandwagon. Fast forward a few months and the reality of major contributors such as Kyrie Irving, Al Horford, Jaylen Brown, Marcus Smart, Marcus Morris and Daniel Theis missing a combined 112 games, it’s remarkable that Boston has been able to sustain its early season success.

Boston currently finds itself in second place in the Eastern Conference standings with more wins than last season. President Stevens deserves an enormous amount of credit for what he’s done this season and the thought of a fully healthy Celtics team next year should bring shivers of fear down the spines of the rest of the league.

Defensive Player of the Year:
Rudy Gobert - Utah Jazz
Runner up: Kevin Durant - Golden State Warriors
It wasn’t a shock to anyone when Rudy Gobert missed 22 of Utah’s first 40 games of the season and the Jazz started out 16-24. But what did shock many was Utah’s epic turnaround, where in the 40 games since Gobert’s return they have gone 31-9. The Jazz currently find itself in the fourth spot in the Western Conference, and more importantly, Number One in the league in defensive statistics. Gobert has become the league’s best rim protector, averaging 2.4 blocks per game, and his opponents shoot 48% in the paint against him. Utah finds itself in a great spot in the aftermath of Gordon Haywards’ departure and their soon to be defensive player of the year deserves a lot of the credit.

Sixth Man of the Year:
Will Barton - Denver Nuggets
Runner up: Lou Williams - Los Angeles Clippers
Toronto guard Fred VanVleet also put up a good fight, but ultimately Barton locked it up with his contributions in Denver’s late-season playoff push. When Gary Harris suffered a knee sprain injury in March and missed 11 straight games, most pundits counted out the Nuggets. However, with the superb play of Nikola Jokic and Will Barton (who in the games where Gary Harris sat out averaged 18.5 PPG, 5.2 RPG and 3.7 AST), Denver went 7-4 and now find itself in prime position for a playoff spot with a win over the Timberwolves on Wednesday night.

Barton, who channeled his inner Dion Waiters and turned down a $42-million-dollar extension before the season with Denver, seems to have hit the jackpot with the start of free agency only a couple of months away. Barton will get paid and having a Sixth-Man of the Year award will definitely help his case.

Most Improved Player of the Year:
Victor Oladipo - Indiana Pacers
Runner up: Jrue Holiday - New Orleans Pelicans
Jrue Holiday deserves high praise for the season he’s had but this race isn’t close. Victor Oladipo, after being heavily scrutinized last season in Oklahoma City, transformed his body in the off-season and turned himself into an all-NBA and all-defense caliber player. Indiana enjoys their best record since 2014 after many thought that they would finish towards the bottom of the league after losing Paul George. Oladipo set new career highs across the board this season: field goal percentage, three-point percentage, free throw attempts, free throws made, rebounds, steals, assists and points. A complete two-way player at 25 years old, the sky is the limit for the Indiana Hoosier product.
Rookie of the Year:
Ben Simmons - Philadelphia 76ers
Runner up: Donovan Mitchell - Utah Jazz
Donovan Mitchell was my guy all year, that is until the last two weeks of the season. My argument for Mitchell was the eye test: in Donovan Mitchell, I saw a player that was playing way beyond his age and experience, like Bill Simmons correctly refers to as, “a young Dwayne Wade”.

All NBA Teams:
* My Rule: A player is disqualified from All-NBA consideration if they don’t play at least 60 games (No Jimmy Butler- 59 games, no Stephen Curry- 51 games)

For the three All-NBA teams, there were three tough decisions made. The first one, my Damian Lillard over Russell Westbrook pick for first team, ultimately came down to team production. Both point guards had phenomenal seasons, Westbrook may wound up averaging another triple double, and Lillard, shooting the best true shooting percentage of his career at 59.3%, jumped up another level in his stardom this season, leading a team with the same roster as last year, with a struggling CJ Mccollum since the all-star break, to seven more wins.

The second conflict was between Demar Derozan and Victor Oladipo for the second team shooting guard slot. While many would assume Derozan deserves the nod without any consideration, surprisingly, statistically Oladipo deserves the award: while they're tied in points per game, (23.1), Oladipo averages more assists, rebounds, steals, blocks and shoots a better field goal percentage. However, a lot of these numbers have changed due to Derozan’s slump over the past month. I decided not to hold Derozan’s recent play against the remarkable year he's had until that point, he led Toronto to arguably the best season of their existence and has given hopeless Toronto fans some hope heading into the post-season. Sorry Vic, you’ll just have to wait your turn.

Lastly, Nikola Jokic over Karl Anthony-Towns for third team center was one up until a month ago I never saw coming. During early February time, Jokic wasn’t a thought for all-NBA; He was too inconsistent on a nightly basis, and was the lead player on an team failing to live up to expectations. However, since March 7th, Jokic has been lighting it up on a nightly basis, (averaging 23.3 PPG, 6.6 AST, 11.5 REB, 1.0 BPG) with key players such as Paul Millsap and Gary Harris sporadically sitting for a lot of them. Jokic has put Denver on his back in NBA season crunch-time, while Karl Anthony-Towns has seen his team slip since Jimmy Butler went down with an injury. This decision could have gone either way, but after all the Joker was my pick. Hopefully, Ben Simmons doesn’t show this to KAT and he drops an epic performance like the last time, I don’t want to change my pick again. My head hurts.