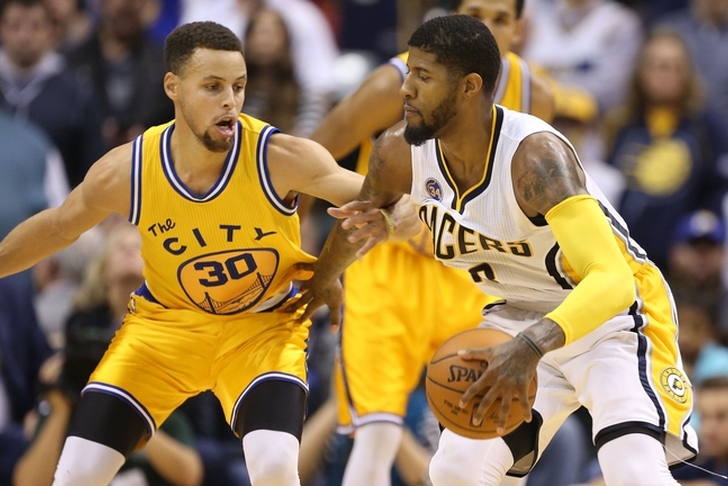 The NBA offseason has reached a quiet point with free agency basically over, but there remain some major storylines that continue dominate the summer. There's nothing new right now on the Carmelo Anthony saga, but there are updates on a possible Kyrie Irving trade. Here's the latest on Irving and more NBA rumors you need to know:

Warriors plan to pursue Paul George next summer
Paul George's pending free agency in 2018 is another storyline that has consumed the league this summer, and another team is planning on getting into the mix for him.

Tim Kawakami of The Athletic joined Tim Bontemps on his podcast this week and said the Golden State Warriors will pursue George next summer, adding that Warriors owner Joe Lacob “is going to try and find a way” to sign him.

The Warriors briefly discussed a trade with Indiana Pacers that would have brought George to Golden State earlier this summer, but talks didn't advance past the initial stages and George was traded to the Oklahoma City Thunder. However, George now plans to seriously consider signing an extension with OKC if they emerge as a contender with him and Russell Westbrook. Golden State is hoping they can change that.

J.J. Redick wants to stay with 76ers
The Philadelphia 76ers signed J.J. Redick to a one-year, $23 million deal this offseason, but Redick wants to play for the franchise for several years and plans to re-sign with them next summer, according to HoopsHype's Bryan Kalbrosky:

While he will face free agency again next summer, he said he would prefer to stay with the Sixers – though he does understand things can change in the NBA.

“It is the ideal scenario … I also understand given their cap situation and given the age of their core that even if I do stay for two or three years, it may only be on one-year deals.”

A person with knowledge of the Detroit Pistons' front office told the Free Press recently that the organization is interested in the four-time NBA All-Star, who nailed the winning shot to clinch the 2016 NBA title for the Cavs.

That's not a shocker. ESPN.com’s Adrian Wojnarowski, citing league sources, reported late last month that “there were approximately 20 teams” that inquired on Irving when news of his trade request rocked the NBA off-season.

And team president and coach Stan Van Gundy isn’t even trying to hide Pistons interest, telling the team website earlier this week “the Pistons have had some level of conversation with the Cavs.”