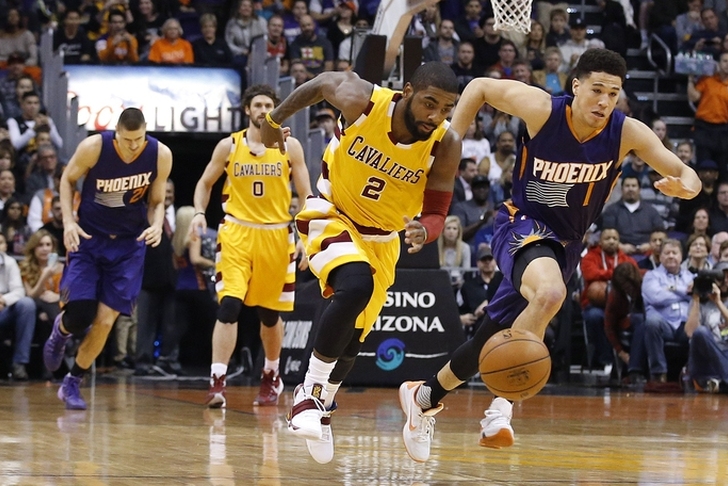 As the Cleveland Cavaliers continue to take offers for Kyrie Irving, other teams around the NBA are gearing up for the start of the new year. The offseason is about to reach a quiet point, but there is still plenty of rumors to sort through around the league - particularly with the futures of Irving and Carmelo Anthony. Here are all the latest NBA rumors you need to know.

Suns, Cavs trade talks break down
The Phoenix Suns were one of the two frontrunners to land Irving in a trade, but talks between the two sides have broken down due to Phoenix's reluctance to include either Devin Booker or rookie Josh Jackson in the deal, according to Joe Vardon of Cleveland.com.

Among the scenarios under consideration, LeBron James worked out with a number of stars in Las Vegas this past week, among them Eric Bledsoe, the Phoenix Suns guard who's been linked to numerous rumors as a possible target in a trade for Irving.

The Suns also own Miami's first-round pick, which is partially protected in 2018. That'd be the second box checked.

Cleveland also wants Josh Jackson, a 6-8 rookie drafted fourth overall by the Suns in June. Phoenix reportedly doesn't want to trade Jackson, and a source said the Suns told Devin Booker he would not be traded -- which would seem to put a serious hamper in this potential trade.

"If that deal (Bledsoe, Miami first rounder and Jackson) for Irving was there, it'd be done by now," a league source with knowledge of the Cavs' thinking told cleveland.com.

Jackson, who averaged 16.3 points and 7.4 rebounds per game at Kansas last year, was picked No. 4 overall in the NBA Draft by the Suns.

Why Carmelo Anthony-Kyrie Irving trade won't happen
Irving's preference is to play for the New York Knicks, and they certainly have plenty of interest in him as well. Their trade offers to the Cavs have centered around Carmelo Anthony, but he refuses to waive his no-trade clause for such a deal because he would want to play for Cleveland with both Irving and LeBron James, according to Moke Hamilton of Basketball Insiders.

Anthony wants out, Irving wants in. On some levels, a swap appears to make perfect sense, right? In theory, a trade centered around Anthony, a future first round pick and either Frank Ntilikina or Willy Hernangomez might be attractive to the Cavs. With Anthony joining Derrick Rose, Jeff Green and James’ three-time defending Eastern Conference Champions, the team would have an opportunity to win the conference for a fourth consecutive year. With either Ntilikina or Hernangomez and the future first round pick, the Cavs would also improve their future fortunes. They may not find a better offer on the open market.

Anthony hasn’t given any indication that he would be willing to go to a Cavaliers team that was playing without Irving. The goal, it is said, was for Anthony to join Irving, not replace him.

Anthony, who is trying to force his way to the Houston Rockets, averaged 22.4 points and 5.9 rebounds per game this past season.

Gallinari will miss the Eurobasket tournament for Italy, but is expected to be fully recovered for the start of Clippers training camp in September, sources said. Clippers doctors are planning to exam the injury soon, but the initial diagnosis calls for a month of rest and rehabilitation on the thumb, sources said.

The Clippers signed Gallinari to a four-year, $65 million deal this offseason and got him in a sign-and-trade with the Denver Nuggets.