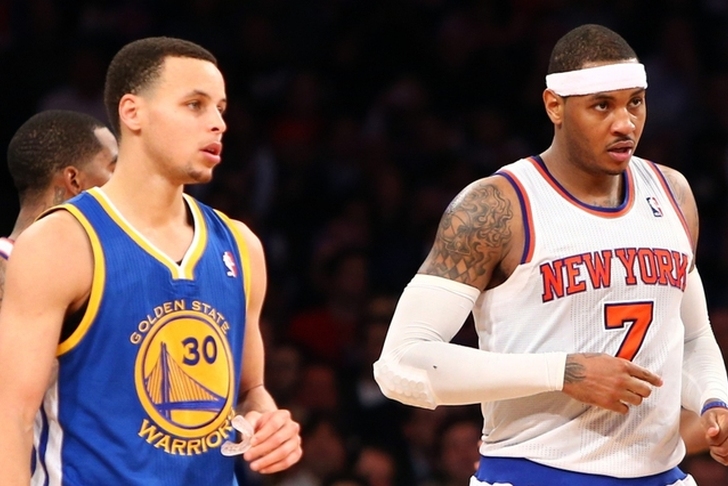 The NBA trade deadline is just over a month away, which means get ready to start hearing more and more NBA trade rumors floating around. With that in mind, here are all the latest NBA news and rumors you need to know.

Curry Wants To Stay
While many teams in the NBA would love if the addition of Kevin Durant caused issues with the Warriors and helped convince Stephen Curry to leave, that doesn't seem likely. Curry told the San Jose Mercury-News he sees no reason to leave the Warriors.

"I can’t," Curry said. "Like I’ve said from Day 1 when I was first asked about free agency, this is a perfect place to play. Bay Area fans are amazing, our organization’s amazing, we’ve put together an amazing team that’s competing for championships every year. There’s really no reason that I can see right now that would draw me elsewhere."

The new NBA CBA allows teams to give one qualified player a monster five-year deal worth about $209 million. If Curry were to leave, the most he'd be able to get is $133 million over four years. Curry has only played for the Warriors and given the added financial incentives to stay, don't expect him to leave the Bay Area.

Melo's Issues With The Knicks
It appears that Carmelo Anthony isn't exactly happy with the New York Knicks right now. Frank Isola of the New York Daily News reports Anthony went on a tirade following the Knicks' come-from-ahead loss to the 76ers. Isola reports Anthony's relationship with Phil Jackson is as worse as it's ever been.

Anthony's relationship with Jackson has never been great and it's much worse now. It didn't help that Jackson would not grant Anthony his wish last May and interview Tom Thibodeau for the head coaching job. Plus, Jackson publicly criticizing Anthony for stalling the offense didn't go over well either. Anthony is becoming increasingly frustrated with losing and Jackson's inability to do anything about it.

However, despite the issues, Isola reports Anthony won't request a trade and hasn't even considered doing so. Meanwhile, Charley Rosen of FanRag Sports reports Anthony will only waive his no-trade clause if he goes to the Clippers or the Cavs. Rosen doesn't mention any sources in that piece, but it's worth mentioning that he coached with Jackson.

Nerlens Noel Happy In Philly?
When Noel returned from his injury early this year, he wasn't happy about his lack of playing time. He was vocal about that, which led to speculation he could be the 76ers' big man who gets dealt. He's playing more now and seems happy with his role. He told the Boston Globe he hears the trade rumors around him, but isn't concerned about that.

"I'm with the Sixers and I am focused on getting better while I’m in Philadelphia and helping this team win games," Noel said. "Obviously Boston is a great city and I’m from here, but I’m just focused on my situation right now. I have a strong mentality that I don’t think anything can break at this point, from getting hurt at Kentucky and all the losing, it has built a certain will in me that just keeps me going and helps me see the positive side of things."

With the way the big man rotation is currently set up, Jahlil Okafor might be the more likely of the three bigs to be traded.