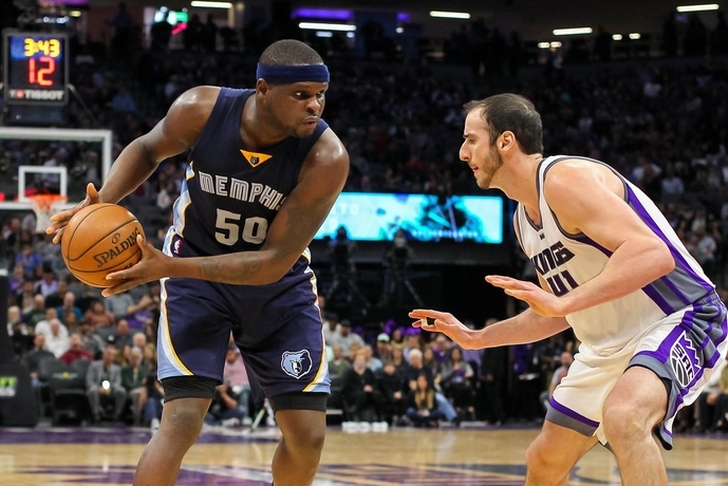 The NBA schedule is in a lull between free agency and the start of training camp, but the uncertain futures of Kyrie Irving and Carmelo Anthony are keeping the league in the headlines. However, there are plenty of other happenings worth keeping an eye on, including the legal case against Zach Randolph that could have major ramifications. Here are all the latest NBA rumors you need to know.

Zach Randolph could be banned from league
New Sacramento Kings big man Zach Randolph was arrested Wednesday and charged with the intent to sell marijuana, as he reportedly possessed two pounds of marijuana at the time of his arrest.

While the legal system still has to play out, there is a chance that Randolph won't be playing in the NBA anytime soon. The league's collective bargaining agreement states that a player will be banned from the league if he is convicted of, pleads guilty to or pleads no contest to a felony distribution of drugs.

The last player to receive that punishment was O.J. Mayo in 2016, who was dismissed from the league after a third positive test for marijuana. Players can not apply for reinstatement for two years.

Chris "Birdman" Anderson was the last player to receive a ban (January 2006) and be reinstated (March 2008) into the league.

Randolph signed a two-year, $24 million contract with the Kings in early July. If he is banned from the league, that contract will be vacated and - since he's 36 years old - there's a chance he may never play in the NBA again.

Warriors once targeted Dwight Howard, Chris Paul combo
The Golden State Warriors have become the league's model franchise during their recent run of success, but there was almost a chance that it didn't happen. Tim Kawakami of The Athletic reports that in the summer of 2012, Golden State tried to acquire both Dwight Howard and Chris Paul.

They simply want every good player they can get....In July 2012, the Warriors actually secured a meeting with Dwight Howard (then the most desired free agent on the board) and pivoted swiftly to Iguodala as soon as Howard signed with Houston. Lacob and Myers once also went hard after Chris Paul but couldn't agree to trade terms with the Clippers.

If the Warriors were able to pull off those acquisitions, they would have moved forward with a core of Chris Paul, Stephen Curry/Klay Thompson and Dwight Howard. Golden State likely would've had to part with either Curry or Thompson (or both) in order to get Paul, in which case the Splash Brothers would never exist - or they would, but for the Los Angeles Clippers.

I think Warriors fans are pretty happy with the way things worked out with their current core.

Irving didn't speak to Cavs teammates for days at a time during playoffs
The discord between Kyrie Irving and the Cleveland Cavaliers apparently goes back to last season. ESPN's Dave McMenamin told the BBall Breakdown podcast that Irving began to distance himself from his teammates during the postseason and would go days without speaking to anyone associated with the team.

"I’m not sure. Phoenix, of course, hired (former Cavalier) James Jones this offseason,” McMenamin said. “He’s been inside that locker room. He saw Kyrie Irving in the playoffs this year — in between the first round when they beat Indiana and the second round when they played Toronto — go consecutive days without speaking to a teammate at practice. On that stage.

“It’s one thing for people to go through your ups and downs during the regular season. But when you get to the playoffs, the main thing is the main thing, and we’re brothers, and we’re pulling together to get this thing done. Even at that level, there were things that made him sullen or reclusive from his teammates.”

He also discovered that James had asked Cleveland to trade him for Chris Paul after the Cavs won the title in 2016 and that Cleveland was including him in trade talks for Paul George and Jimmy Butler this offseason.

All of those factors ultimately led to him demanding a trade.