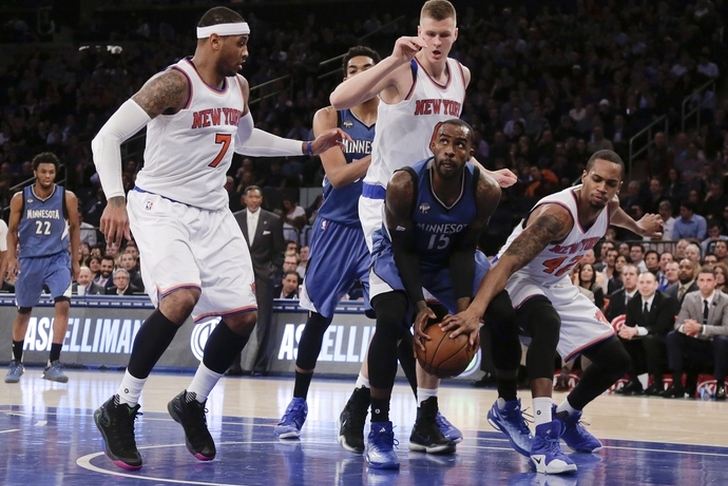 The start of NBA training camps are just over a month away, and excitement is building following the release of the schedule on Monday night. Kyrie Irving's future continues to be at the forefront of headlines, but there are also updates on current free agents and the New York Knicks' plans with Kristaps Porzingis. Here are all the latest NBA rumors you need to know:

Knicks won't trade Kristaps Porzingis, even for Kyrie Irving
The Cleveland Cavaliers are looking to land one of four young stars in return for Irving, with Porzingis being right at the top of that last. Even though the Knicks were shopping Porzingis prior to the draft, they took him off the market following the firing of team president Phil Jackson and have made him untouchable, according to Steven Marcus and Mike Rose of Newsday.

The Knicks don’t appear interested in trading Kristaps Porzingis, including a possible deal for Cavaliers All-Star point guard Kyrie Irving, according to a league source.

“[Knicks president] Steve Mills and [Knicks general manager] Scott Perry on the record were very clear that Kristaps was part of the future,’’ the source said in reference to comments made last month by both executives. “In all the discussions since then — there were other rumors before that Cleveland would want Kristaps — and it didn’t seem that [the Knicks] were interested at all in a conversation.’’

New York is currently planning on building their future around Porzingis and first-round pick Frank Ntilikina once they part ways with Carmelo Anthony.

Porzingis averaged 18.1 points, 7.2 rebounds and 2.0 blocks per game this past season.

Timberwolves "optimistic" they can re-sign Shabazz Muhammad
The Minnesota Timberwolves renounced their rights to Shabazz Muhammad earlier this offseason when the two sides couldn't agree to a long-term extension, making him an unrestricted free agent - yet the talented wing player remains unsigned.

Still, there is the potential for him to return to the team, something new Timberwolves signing Jamal Crawford implored Muhammad to do on Twitter.

Minnesota has remained open to bringing back Muhammad on a cheap, short-term deal, which he is now more likely to accept given the lack of interest he has received on the open market. A one-year "prove it" deal is now what Muhammad is looking at, allowing him to re-enter free agency next summer.

The Timberwolves also need bench scoring, something Muhammad has proven he can provide. He averaged 9.9 points and 2.8 rebounds in 19.4 minutes per game last season.

Pierce's number will be the 22nd retired by the Celtics. He played 15 seasons for the franchise after being selected with the No. 10 pick in the 1998 draft, averaging 21.8 points, 6.0 rebounds, and 3.9 assists per game in those 15 seasons.

He spent the final four years of his career playing for the Brooklyn Nets, Washington Wizards and Los Angeles Clippers.