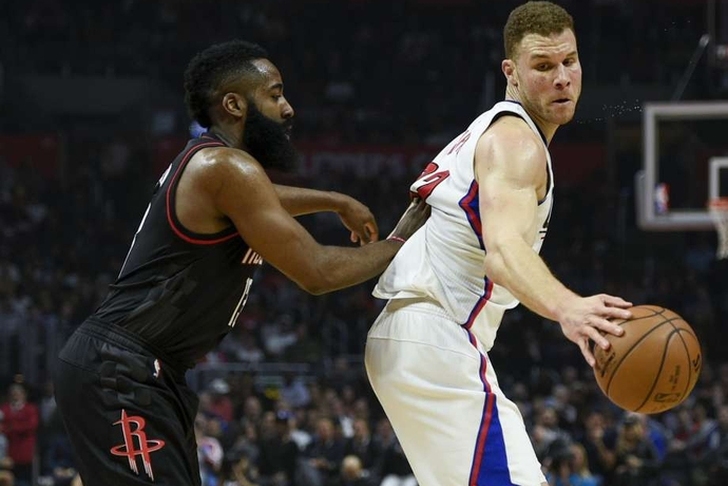 Much of the frenzy centered around Kyrie Irving's trade demand has died down as the Cleveland Cavaliers evaluate trade offers, but there is still plenty going on around the NBA. Several other players are being shopped this offseason as the trade market heats up before training camp gets here. Here are all the latest NBA rumors you need to know.

Blake Griffin fires back at Daryl Morey
Houston Rockets general manager Daryl Morey told Ben Golliver of The Crossover that it "might be better not to have" NBA awards, expressing his displeasure that Oklahoma City Thunder point guard Russell Westbrook won the MVP over James Harden.

“I don’t know if this is a good process,” Morey told The Crossover. “The ones that are decided by players or executives or media, they all have their strengths and weaknesses. I honestly don’t think there’s a good process. You could argue for eliminating the awards altogether. I don’t really see a good way to do it that doesn’t have major issues. I like clean answers. If there’s not going to be a set criteria and there’s going to be issues with how it’s structured, for me it might be better to not have it.

“Given that the criteria seems to be shifting away from winning, I would guess that [adding Paul] probably doesn’t help anyone’s chances on our team. That said, I don’t think anybody really cares [going forward]. James definitely cared and I think we all cared [about the 2017 MVP]. But we’ve moved on since the award isn’t focused on winning any more. Let’s just win and not worry about it.”

Los Angeles Clippers forward Blake Griffin fired back at Morey's comments on Twitter, saying they might as well do away with the championship as well.

honestly, we should do away with championships too. seems dumb to me. participation trophies for everybody. don't @ me https://t.co/Hdnow9GoQO

There is a bit of a rivalry brewing between the Clippers and Rockets after All-Star Chris Paul forced his way to Houston in a trade, and Griffin's comments are just adding more fuel to that fire.

Knicks didn't offer Derrick Rose a contract
The New York Knicks maintained all offseason that they were open to bring back starting point guard Derrick Rose, but he instead signed with the Cavs for the veterans minimum. That's because he didn't want to return to the Knicks to mentor rookie point guard Frank Ntilikina - and because New York never even offered him a contract, according to Marc Berman of the New York Post.

The divorce was mutual when Rose accepted the Cavaliers’ veteran minimum for one year, $2.1 million last week.

The Knicks, who kept in contact with Rose until the end, never offered him the veteran’s minimum, according to an NBA source.

Bucks shopping Greg Monroe, John Henson
The Milwaukee Bucks have been trying to find a trade partner for big man Greg Monroe for over a year, and that's unlikely anything will change this time around considering his contract (Monroe will make $17.9 million this year). However, Milwaukee is still trying to trade him and fellow big man John Henson, according to Gery Woelfel of the Racine Journal Times and Woelfel's Press Box.

According to sources, the Bucks are still actively trying to trade veteran centers Greg Monroe and John Henson, two players who have seen their roles with the team diminish.

Monroe started 67 games for the Bucks after he signed with them two seasons ago before being relegated to the bench for what Bucks coach Jason Kidd said was an attempt to bolster the team’s off-the-bench scoring. Monroe hasn’t started a single game since and been the subject of constant trade rumors.

Henson has been a part-time starter during his five seasons in Milwaukee but seldom played at the end of the 2016-2017 regular season and saw minor minutes in just two of the Bucks’ six playoff games against Toronto.