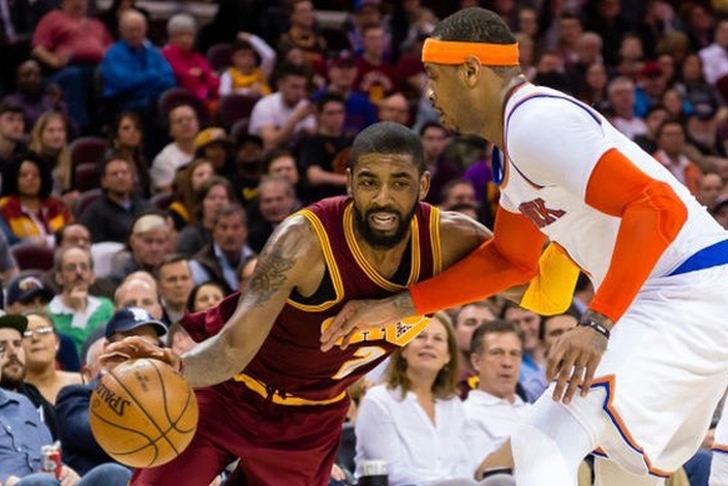 Kyrie Irving's trade request has taken over practically all of the headlines at this point of the NBA offseason, turning much of the league's attention to the Cleveland Cavaliers. Teams around the league are also focusing on the trade market as they try to improve before the start of the new season. Here are all the latest NBA rumors you need to know:

Eric Bledsoe open to joining Cavs
The Phoenix Suns are one of the two frontrunners to land Irving in a trade, and their offer will reportedly center around point guard Eric Bledsoe. He has been working out with LeBron James and Derrick Rose in Las Vegas and wouldn't mind joining the Cavs, according to ESPN's John Wilmhoff.

"I love everything about [the Phoenix area]," Bledsoe told The Arizona Republic just three days ago. "At the same time, I want to win."

Bledsoe's planned workout with James and Rose adds fuel to the rumors that he could end up in Cleveland. NBA executives, according to Brian Windhorst, believe that the Suns are capable of making the best possible offer to the Cavaliers for Irving -- if they are willing to reconsider including No. 4 draft pick Josh Jackson with Bledsoe.

Kyrie Irving "badly" wants to play for Knicks
While the Suns are hoping to land Irving, his top choice would be to be traded to the New York Knicks, according to ESPN's Pablo Torre.

Irving is a New Jersey native and grew up a Knicks fan. However, there is one speed bump blocking a deal between New York and Cleveland - Carmelo Anthony.

The Knicks have been willing to include Carmelo Anthony and several first-round picks in a deal for Irving, but Cleveland doesn't have much interest in the offer as Anthony doesn't appear willing to waive his no-trade clause for them.

Anthony - who does not want to play for the Knicks next season - has previously said that he would waive his no-trade clause for either the Cavs or Houston Rockets, but is now set on joining Houston. He was reportedly convinced that he would be traded to the Rockets earlier this offseason and won't settle for anything else.

Anthony, who has two years and $54 million remaining on his contract, averaged 22.4 points and 5.9 rebounds per game this past season. Irving averaged 25.2 points and 5.8 assists per game while shooting 47.3 percent from the field.

Knicks looking to trade for veteran backcourt help
As the Knicks try to figure out what the future holds with them and Carmelo, they're also hoping to improve their roster by adding a veteran player in the backcourt. At this point, that will likely only happen in a trade after New York signed second-round pick Damyean Dotson, according to ESPN's Ian Bagley.

Second-round pick Damyean Dotson has agreed to a three-year deal with the Knicks, as was reported on Saturday. The first two years of the contract are guaranteed. The amount of the deal is unknown, but it likely will take up most of the Knicks' remaining $1.4 million in cap space. If that's the case, New York will only have veteran's minimum exceptions left to spend on free agents. The club still hopes to add a veteran point guard. Doing so in a trade for Anthony seems to be the best route.

New York is expected to go into the season with first-round pick Frank Ntilikina and Courtney Lee as their starting backcourt with second year man Ron Baker coming off the bench.

The Knicks reached out to a few veteran point guards at the start of free agency, including Rajon Rondo, George Hill, Shelvin Mack and Darren Collison, but were unable to land any of them.

They have been fielding offers for Lee and Kyle O'Quinn, as those are the two pieces they are most likely to move if they do make a trade. However, their best chance to land a quality veteran guard would likely come in a Carmelo trade.