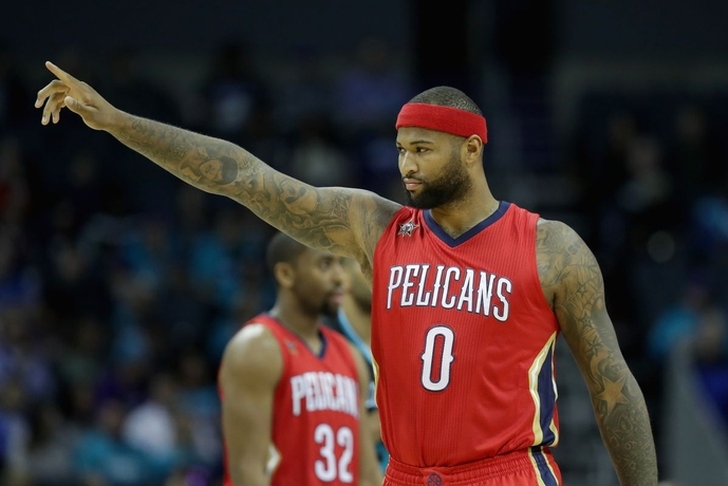 The NBA offseason has reached a quiet point with free agency essentially over and training camps still far away on the horizon, but there is still plenty of other happenings worth monitoring around the league. A possible Kyrie Irving trade remains at the forefront of headlines and questions remain about Carmelo Anthony's future with the New York Knicks. Here are all the latest NBA rumors you need to know.

"Huge money" on the line for DeMarcus Cousins this season
DeMarcus Cousins is one of many All-Stars who will be unrestricted free agents next offseason, and as he enters his first full season with the New Orleans Pelicans, he could cost himself a lot of money if he doesn't play well alongside Anthony Davis, according to Chris Mannix of The Vertical.

So much is at stake for Cousins, who will be a free agent after next season. This time last year, Kings management was signaling that it was committed to locking up Cousins with a five-year, max-level contract. Today, Cousins’ future is shrouded in uncertainty, with executives across the league keeping a close eye on how his first full season in New Orleans plays out.

“This season is huge,” said a Western Conference team executive. “He has to prove he can win. He has never played with anyone near the talent of Davis. He has to show he is willing to sacrifice for the team and do what is best for the team first. He really needs to turn a corner. If he acts up, he will cost himself a lot of money.”

Added another Western Conference exec, “There’s no way to overstate it – there is huge money on the line.”

Cousins refuses to address anything beyond next season. “I’m not real concerned,” Cousins said. “I know people know my talent. I’m past all that.”

Kristaps Porzingis wants Carmelo Anthony to stay with Knicks
Anthony is trying to force his way out of New York to get to the Houston Rockets, telling the Knicks that he doesn't want to play for them and will only waive his no-trade clause for Houston. However, the team is trying to convince him to return next season, and Kristaps Porzingis told Shaun Powell of NBA.com that he wants Carmelo back as well.

If the Knicks get a fair return for Anthony, that would do plenty to help keep Porzingis’ confidence in the new regime. Porzingis has a solid relationship with Anthony and is a vested spectator at the ongoing spectacle. In a perfect world according to Porzingis, there would be no reason to trade Anthony.

“He’s an All-Star, an incredible player and I’ve learned so much from him,” Porzingis said. “There’s still so much for me to learn form him. I would love to have him around and keep playing alongside him. But it is what it is. It’s a business. If it ends, well ... I don’t know, it’s out of my hands. I’m really thankful for these couple of years I’ve been with him, just seeing how he works during the summer. It proves he wants to win and he wants to be great. I’m sure he’ll make the right decision for himself.”

Anthony, who has two years and $54 million remaining on his contract, averaged 22.4 points and 5.9 rebounds per game this past season. Porzingis averaged 18.1 points, 7.2 rebounds and 2.0 blocks per game.

Free-agent guard Gerald Henderson Jr. has decided to undergo an operation on his troublesome hip and could potentially miss the entire 2017-18 NBA season to fully recover, league sources tell ESPN.

Henderson hasn't closed the door on a possible return late in the season, but his recovery process will dictate how soon he can come back.

Henderson averaged 9.2 points and 2.6 rebounds in 72 games for the Philadelphia 76ers last season.