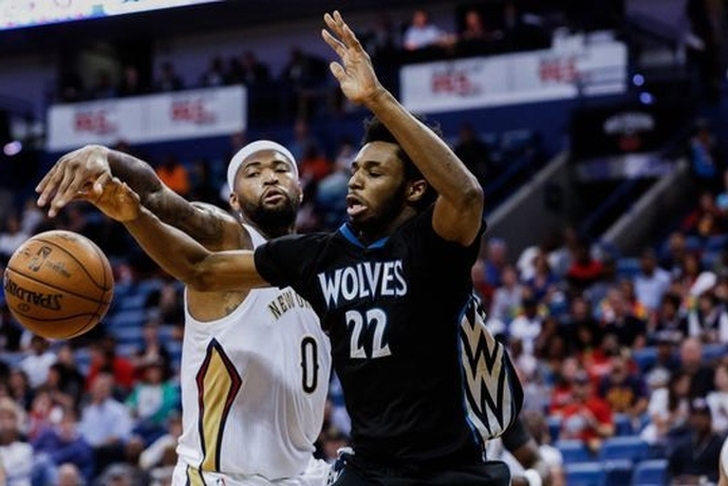 The NBA offseason has reached its annual quiet point between the free agency frenzy and the start of training camps, but that doesn't mean there isn't anything happening around the league. The Kyrie Irving trade saga is still ongoing, yet the Minnesota Timberwolves appear ready to exit the race as they work on a max contract extension with Andrew Wiggins.

Carmelo Anthony is also trying to figure out his future with the New York Knicks, and while the team wants him to stay, another team could be emerging as a potential trade partner. Here are full updates on those two stories and other NBA rumors you need to know.

DeMarcus Cousins recruiting Carmelo Anthony to Pelicans
Anthony is trying to force his way to the Houston Rockets before the start of the season, but the Knicks won't trade him there because they don't like what the Rockets can offer in return. As such, the two sides have reached an impasse.

Other teams like the Cleveland Cavaliers and Portland Trail Blazers have been trying to convince Carmelo to waive his no-trade clause for them, and it appears that DeMarcus Cousins is trying doing the same for the New Orleans Pelicans, according to ESPN's Ian Begley.

Add Pelicans star DeMarcus Cousins to the list of NBA players who'd like Carmelo Anthony traded to their team: pic.twitter.com/zkr3M5Jb4q

However, any deal involving the Pelicans and Anthony seems extremely unlikely. Point guard Jrue Holiday is the only player New York figures to be remotely interested in, and after signing a five-year, $126 million extension with New Orleans this offseason, he isn't eligible to be traded until mid-December. Even then, the Pelicans likely wouldn't be able to muster up an offer that would appeal to the Knicks.

Anthony, who has two years and $54 million remaining on his contract, averaged 22.4 points and 5.9 rebounds per game this past season. Cousins averaged 24.4 points and 12.4 rebounds in 17 games with the Pelicans after being traded.

RELATED: "Huge money" on the line for DeMarcus Cousins

Timberwolves plan to offer Andrew Wiggins the max extension
Minnesota has expressed interest in trading for Irving, but Cleveland wants Andrew Wiggins included in any deal. The Timberwolves have taken Wiggins off the table and want to lock him up long term by signing him to a max contract extension, according to Jon Krawczynski of the Associated Press.

Wolves owner Glen Taylor tells AP he is ready to give Wiggins max, but 1st wants meeting to hear from AW that he's committed to improving

Taylor wants to hear Wiggins say face-to-face that he is willing to put in the work to become a two-way star. Taylor believes AW is ready

But this is vintage Taylor. Always wants to close a deal with a handshake and a frank conversation.

Wiggins had been seeking a max deal from Minnesota and told the team he wouldn't sign for anything less. The extension would be a five-year deal worth nearly $150 million and is expected to be completed next week.

Under Armour gives Dennis Smith Jr. one of the most lucrative shoe deals for a rookie
Dallas Mavericks rookie point guard Dennis Smith Jr. was the last top 10 pick to sign an endorsement deal with a shoe company (other than Lonzo Ball and his Big Baller Brand), and that decision to wait has paid off. Smith has agreed to a three-year deal with Under Armour that will pay him $2 million per year plus incentives, according to ESPN's Nick DePaula.

The most marketable NBA players are typically guards. Players with the ball in their hands -- explosive attackers with an endless flair to their game. As kids look up to and spend endless hours in front-yard hoops emulating their every move, brands are left constantly looking for the next great athletes who can translate into equally great endorsers.

Dennis Smith Jr. checks all of those boxes, leading Under Armour to sign the Dallas Mavericks rookie point guard and No. 9 overall 2017 draft pick to a three-year footwear and apparel endorsement deal worth as much as $2 million per year with incentives, according to sources. The brand plans to incorporate him immediately as one of its key featured basketball players right out the gate.

"I am definitely excited to be a part of team Under Armour as I get ready to go into [training] camp for my rookie year," Smith Jr. said. "Under Armour is an explosive brand in basketball right now, and I'm excited to join Stephen [Curry] and Seth [Curry] and the team at UA in making our mark together."

The relationship between Under Armour and Smith started when he was named the one-on-one champion of Stephen Curry's SC30 Select Camp in 2015.

Smith was receiving endorsement offers worth less than $1 million per year before the draft but saw his value increase after a dominant Summer League. He averaged 17.3 points, 4.8 rebounds, 4.2 assists and 2.2 steals per game for the Mavs in Vegas.