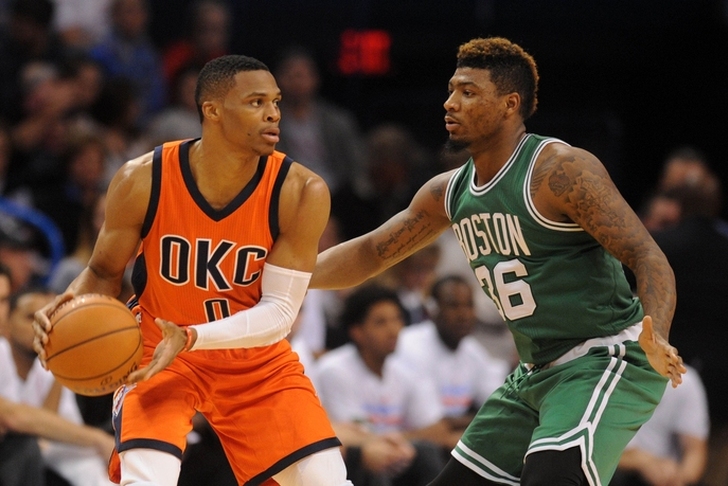 NBA free agency is nearly two weeks old and most of the big names have agreed to deals with teams. However, there are still several quality players available and several trade rumblings across the league. Here are the latest NBA rumors and news from around the Association.

Westbrook To Celtics?
Kevin Durant is already gone and Russell Westbrook could be next. According to Howard Beck of Bleacher Report, several NBA general managers expect Westbrook to be dealt and to one team in particular.

"What I’m hearing here in Las Vegas from some GMs is that they think not only Russell Westbrook will get traded, that it’ll be sooner than later,” Beck said in a video. "And that the most likely destination now would be the Boston Celtics."

The Thunder have been willing to make deals involving their key players in the past, as shown by trading away James Harden, Reggie Jackson and Serge Ibaka. Westbrook certainly won't sign a deal before he hits free agency, as there's much more money to be made by waiting. If the Thunder do think they'll lose Westbrook, their recent history under GM Sam Preti indicates they'll deal Westbrook.

Will Bulls Trade Jimmy Butler?
The Bulls had trade talks with the Celtics and Timberwolves about Butler, but weren't able to agree to a deal. According to ESPN's Zach Lowe, Butler is off the table for now.

Butler is off the market for now, per league sources, and it's tempting to read Chicago's all-in splash as an effort to maintain a winner around him.

Who in the hell knows? Perhaps if Wade plays well enough to keep them in the postseason race, the Bulls might feel comfortable flipping Butler for picks, triggering a rebuild that would only start in earnest once Wade and Rondo cycle out.

If the Bulls do trade Butler, they'll continue to have a high asking price. They simply won't give away a young, talented guard who won't hit free agency until after 2019 at the earliest.

Raptors Tried To Land Pau Gasol, Taj Gibson?
The Raptors landed Jared Sullinger on a one-year deal earlier this offseason, but TSN reports he wasn't the team's first option. Or even the second or third.

The Raptors were in contract talks with Pau Gasol until the very end, and even had lined up a trade involving Terrance Ross to clear the needed cap space. The Raptors were also on the verge of landing Taj Gibson in a trade with the Bulls. The two sides had a deal in place that would also bring Tony Snell to Toronto, but that fell apart when Dwyane Wade joined Chicago. The Raptors also had talks centered on a Ross for Nerlens Noel trade, but weren't high enough on Noel. They discussed deals for Serge Ibaka and Paul Millsap, but the Thunder's asking price for Ibaka was too high and the Hawks pulled Millsap off the block when they couldn't re-sign Al Horford.

Knicks Add Ndour
The Knicks are brining Maurice Ndour over from Europe this season.

Ndour played his college ball at Ohio University. He signed with the Mavericks after showing some promise in the summer league last year, but was waived in October. He joined Real Madrid in the middle of the season, and played sparingly.