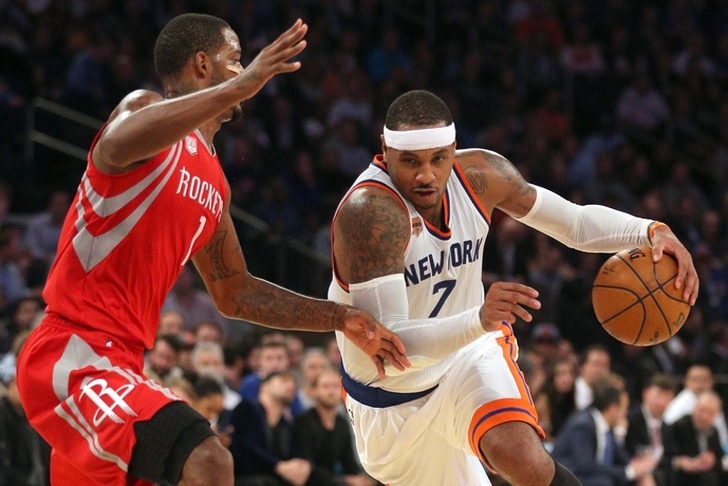 The NBA offseason has reached its quiet point after the free agency frenzy, but while Kyrie Irving trade talks might be the top story around the league, there are some new developments in the Carmelo Anthony saga. We are also starting to find out the first details of the new schedule for the upcoming season. Here are all the latest NBA rumors you need to know.

Carmelo Anthony may waive no-trade clause for 3 new teams
Anthony has been trying to force his way to the Houston Rockets before the start of the season by telling the New York Knicks that they are the only team he will waive his no-trade clause for. However, the Knicks won't trade him there because they don't like what the Rockets can offer in return.

Marc Berman of the New York Post reports that the Knicks told Anthony they are "unwilling to make a bad trade" involving him and want him to consider waiving his no-trade clause for other teams. Anthony is working with the Knicks on this front and may be willing to accept a trade to the Cleveland Cavaliers, Oklahoma City Thunder or Portland Trail Blazers.

The New Orleans Pelicans have also been trying to get into the Carmelo Anthony sweepstakes, but he has no interest in joining DeMarcus Cousins and Anthony Davis in the Big Easy.

Portland has been pursuing Anthony the hardest with star guards Damian Lillard and C.J. McCollum serving as primary recruiters. They could offer a package centered around Meyers Leonard, Mo Harkless and future draft picks. However, if the Knicks are more interested in other players, Portland would likely oblige - but Lillard and McCollum are obviously off the table.

Anthony's willingness to accept a trade to Cleveland does re-open the door to a Carmelo-for-Kyrie Irving trade, but that still appears to be unlikely. Irving's preference is to be traded to New York, yet Anthony wants to play for Cleveland with both Irving and LeBron James. Losing Irving makes the Cavs a far less attractive destination for him.

Rockets may deal Trevor Ariza for Anthony
With Anthony now considering teams other that the Rockets, Houston may be open to trading Trevor Arizona, according to Steve Kyler of Basketball Insiders.

Houston has refused to include Ariza in any trade talks this offseason because of his defensive abilities, and they think they need his versatility on that end of the floor if they were to acquire Anthony. However, he is one of just a few valuable trade pieces the Rockets have, along with Clint Capela, Ryan Anderson and Sixth Man of the Year Eric Gordon (Chris Paul and James Harden are off the table).

The Rockets have been trying to unload Anderson and his contract (three years, $60 million remaining) this offseason but have yet to find a taker. In fact, his contract is why New York hasn't been interested in Houston's offers to this point.

Ariza is the most expendable of the remaining trio. If the Rockets do decide to pursue a trade in the coming months or at some point during the season, he would be the guy they deal.

These games have become a showcase for the league and usually feature high-profile matchups. The Knicks have played on Christmas Day more than any other team, and 42 of the previous 51 games have been played at Madison Square Garden. Philadelphia comes into the season with a lot of hype after adding No. 1 overall pick Markelle Fultz to their core of Ben Simmons, Joel Embiid and Dario Saric.

The other four Christmas Day matchups are expected to be announced in the coming days.