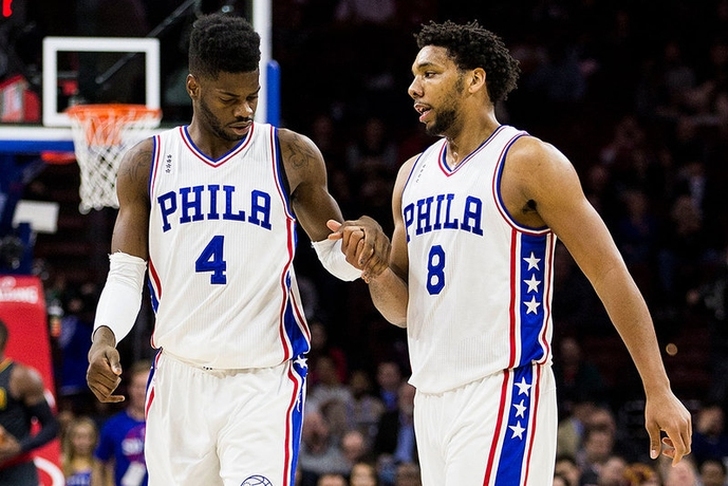 The NBA world has reached quiet point, with the Olympics over and training camps roughly a month away. However, there are a few notable free agents available and trade rumors that are still creating rumblings. Here are the latest NBA rumors you need to know from around the Association.

76ers Trading Okafor Or Noel?
With Nerlens Noel, Jahlil Okafor and Joel Embiid on the roster, it's only a matter of time before the 76ers trade one of the their bigs. And Derek Bodner of Philly Mag reports it could come sooner rather than later, with Okafor or Noel likely leaving.

That leads us back to the inescapable Noel-or-Okafor debate, one which 76ers fans have been having for the past 12 months. It became readily apparently early on that Okafor and Noel didn’t fit well together on the court and, barring drastic (perhaps unrealistic) improvement from one or the other, it was a situation that was always going to have to be resolved eventually. The additions of Simmons and Embiid just sped that process up a little bit.

The pros and cons of each are obvious. Okafor has the offense and higher ceiling, but not the defense or even really the passing. Noel is a great defender, but won't be a 20-point guy per night like Okafor can be. At some point, a trade of one of the two will happen. It's just a matter of when.

Dragic To Be Focal Point Of Heat Offense?
With Dwyane Wade in Chicago, it seems the Miami Heat are prepared to change the offensive style. Head coach Erik Spolestra told The Miami Herald that Dragic's skill set will be maximized.

"It only makes sense for us to maximize Goran's strengths, and Hassan [Whiteside's] strengths, Justise Winslow's strengths," Spoelstra said. "Their strengths are their speed, their athleticism. Goran is one of the best fast-break, transition point guards in this game. He will force tempo regardless of how you want to play or how you want to defend. Goran is going to run ... You don't find many players that can attack, that can play fast, that can make other players better in that type of game. And he's relentless in getting to the rim. And Goran is that kind of player. And I think young players gravitate to Goran. They want to play that style."

Wade is an aging player and wasn't an ideal fit for a run-and-gun type offense. But with Wade gone, the Heat could push the tempo more this season.

Kendall Marshall And Wizards?
Marshall was part of a salary dump earlier this week, getting traded to the Utah Jazz who waived him. Set to be a free agent, CSN Mid-Atlantic reports Marshall could be a fit for the Wizards. Marshall is a pass-first point guard, although there are worries about his defense and shooting. The Wizards could be without John Wall to start the season, as he underwent offseason knee surgery. The only other notable PGs on the roster are Trey Burke and 2012 second rounder Tomas Satoransky.