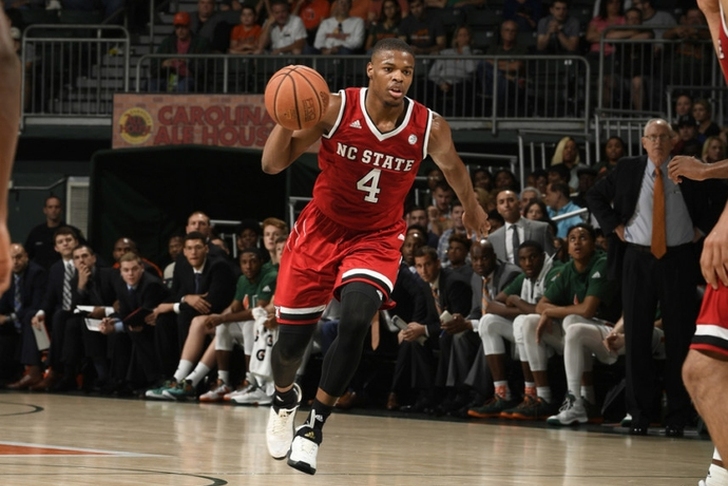 The 2017 NBA Draft is tomorrow and the rumors are flying around at a frenetic pace. There's the buzz around Jimmy Butler and Paul George trades and a few other deals, including D'Angelo Russell to the Nets, have already happened. Here are all the latest NBA Draft rumors you need to know:

Celtics may trade down for Dennis Smith Jr.
The Boston Celtics are locked into Jayson Tatum with the No. 3 pick in the draft, but that's only if they keep it. They have been using that to try to make more trades, one of which being to move down in order to draft Dennis Smith Jr., according to Steve Bulpett of the Boston Herald.

Danny Ainge and Co. were back in Boston plotting strategy and looking to get back in on the transactional fun they kick-started by sending the No. 1 overall pick to Philadelphia.

One NBA exec told the Herald that Ainge would love to find a way to get North Carolina State point guard Dennis Smith Jr., who isn’t rated as high as the third overall pick. Another said the Celts were looking at perhaps moving down in the draft again and picking up another asset for their trouble.

Smith is more of a combo guard than a true point guard, so Boston could be interested in him playing alongside Isaiah Thomas in the backcourt. The 6-foot-3, 195-pounder averaged 18.1 points, 6.2 assists, 4.6 rebounds and 1.9 steals per game for NC State as a freshman this past season.

Knicks deciding between Frank Ntilikina, Donovan Mitchell?
The New York Knicks had a meeting with French point guard Frank Ntilikina today after working out Louisville's Donovan Mitchell, according to ESPN's Ian Begley and Chad Ford. It appears that those two are the prospects are at the top of New York's board.

Ntilkina & Donovan Mitchell are intriguing in part because of the big wingspans/hands they bring. Ntilikina w/ 7 foot wing. Mitchell 6-10.

Worth noting that the Knicks are fans of both Ntilikina and Mitchell. Mitchell worked out for NYK today and Ntilikina met with them: https://t.co/7byDasTVnV

Ntilikina's team, Strasbourg, is playing in the French League Finals, so he had not been able to work out for or meet with any teams in an official capacity. However, the Knicks have had a scout overseas with him throughout the entire pre-draft process.

Despite this being the second time New York had Mitchell in for a workout, Ntilikina is still the player the Knicks plan to take with the No. 8 pick. However, the Mavs have also expressed significant interest in Ntilikina, but pick one spot behind the Knicks. They have had conversations with the Timberwolves about potentially moving up to No. 7 to draft him.

As such, Ntilikina is New York's top option, with Mitchell serving as the backup plan.

Lakers only draft night trade destination for Paul George
As the Los Angeles Lakers continue to try to work on a trade for Paul George, they have emerged as the only team that could possibly land George before the draft, according to ESPN's Brian Windhorst.

“In talking to league execs belief is growing that if Paul George is…traded before the draft it’s going to be to the Lakers,” Windhorst said on SportsCenter. “He has made it clear through his agent that he does not intend to extend his contract with anybody, under any circumstances, except the Lakers, and therefore, it makes it very hard for anybody besides the Lakers to give up any draft assets for Paul Geroge, it’s just not worth it to them. The Lakers move yesterday gives them multiple assets. League agrees that price for PG would be peanuts if LAL aren’t willing to include the number two pick and they’re not. Indiana has to decide, if they want draft pick compensation for Paul George, the Lakers are the team to make the deal with and the deal is to be made between now and tomorrow night.”

After acquiring the No. 27 pick from the Brooklyn Nets in the D'Angelo Russell trade, Los Angeles has offered Julius Randle or Jordan Clarkson, the No. 27 pick and the No. 28 pick to Indiana for George, but the Pacers are balking at the offer.

The Pacers are known to want the No. 2 pick from the Lakers, but Los Angeles is apparently adamant about not dealing that pick. They plan to take Lonzo Ball with the selection.