Kyrie Irving Rumors Roundup: The Latest On A Potential Trade 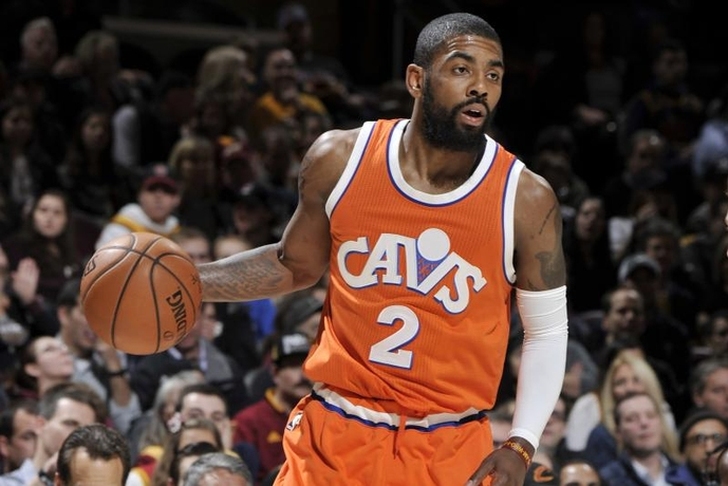 The news of Kyrie Irving demanding a trade from the Cleveland Cavaliers came as a shock to virtually everyone when news of it broke on Friday. He told the Cavs that he would prefer to be traded to the Miami Heat, Minnesota Timberwolves, New York Knicks or San Antonio Spurs, but with three years and $60 million remaining on his contract (he can opt out after the 2018-19 season), Cleveland isn't necessarily in a rush to trade him. Here are all the latest rumors you need to know about a possible trade of the four-time All-Star:

LeBron James was wearing on Irving
The biggest reason why Irving requested a trade was his desire to be the centerpiece of a team, which he didn't feel was possible in Cleveland with LeBron James. ESPN's Ramona Shelburne, Dave McMenamin and Brian Windhorst report that playing second fiddle to LeBron - along with some of LeBron's passive-aggressive antics - was wearing on him.

Irving was tired of being Robin to James' Batman. Tired of having another superstar -- even one of the best players of all time -- in control of his fate. Yes, he had learned from James in the three seasons they'd played together. Yes, he was appreciative. But Irving felt the time had come to take his destiny into his own hands. He wanted to be the centerpiece of a team, as he thought he was going to be three years ago, when he signed a five-year extension 11 days before James decided to come home.

Irving had been thinking about this day for some time. In preparation, he'd reached out to people he trusted seeking advice on how to go about it.

Over the previous few months, the Cavs had been worried about Irving's mindset. They knew at times he'd grown unhappy with playing a secondary role on the team. Griffin had several conversations with Irving throughout the year, sources said, trying to find ways to improve the situation. But Irving had become irritated before, the side effects of James' greatness -- and largesse -- wearing on him. The Cavs had been able to navigate it, and they hoped to again.

Furthermore, Irving is concerned about James' future with the team. There has been plenty of speculation about LeBron leaving the franchise as a free agent in 2018, and while that would make Irving the centerpiece of the Cavs, Irving isn't happy about that either. He feels like Cleveland's roster has been molded to fit LeBron's skillset and not his, to the point where he doesn't feel they have the personnel to be successful playing the up-tempo style he wants to.

Kings, Suns want in on Irving negotiations
Irving does not have a no-trade clause in his contract, meaning that Cleveland doesn't have to abide by the list of four teams he gave them. As such, both the Sacramento Kings and Phoenix Suns are trying to get into negotiations with the Cavs, according to Terry Pluto of the Cleveland Plain Dealer.

I just heard Irving's name attached to Sacramento, not sure what comes back to the Cavs other than Kentucky point guard De'Aaron Fox. The Kings just signed veteran point guard George Hill to a two-year deal with $40 million guaranteed, so I don't know how Irving fits into that roster.

Most of the Irving rumors include Phoenix, with Eric Bledsoe and others coming to the Cavs. The Suns are a good landing spot. I also expect the Cavs to push even harder to sign Derrick Rose to that $2.1 veteran minimum contract.

The Suns are most actively pursuing a deal of those two teams but are unwilling to part with Devin Booker. They have also discussed a three-team trade with the Knicks that would send Irving to New York and net them both Kevin Love and Frank Ntilikina, the No. 8 overall pick in the draft, according to Bleacher Report's Jordan Schultz:

TRENDING: 5 Teams That Could Trade For Cavs PG Kyrie Irving

Carmelo Anthony may stop Irving-to-Knicks
Speaking of the Knicks, they have been willing to include Carmelo Anthony and several first-round picks in a traditional two-team trade with Cleveland.

However, that deal would be contingent on Anthony - who does not want to play for the Knicks next season - waiving his no-trade clause for the Cavs, and that may not happen. Frank Isola of the New York Daily News reports that he'd still prefer a trade to Houston over Cleveland.

The Knicks will contact Cleveland and make a pitch. The obvious move would be to trade Carmelo Anthony and a few first round picks for a bona-fide superstar. However, a source close to Anthony said late Friday that the All Star forward is focused on getting a deal done with Houston.

Anthony would have to waive his no-trade and there is no guarantee that Anthony would do that to join a Cavs team that didn’t have Irving. Also, Anthony probably knows better than anyone that LeBron is leaving next July.

Anthony was reportedly convinced that he would be traded to the Rockets, and as of now, he seems dead set on playing there next season. He averaged 22.4 points and 5.9 rebounds per game this past season.