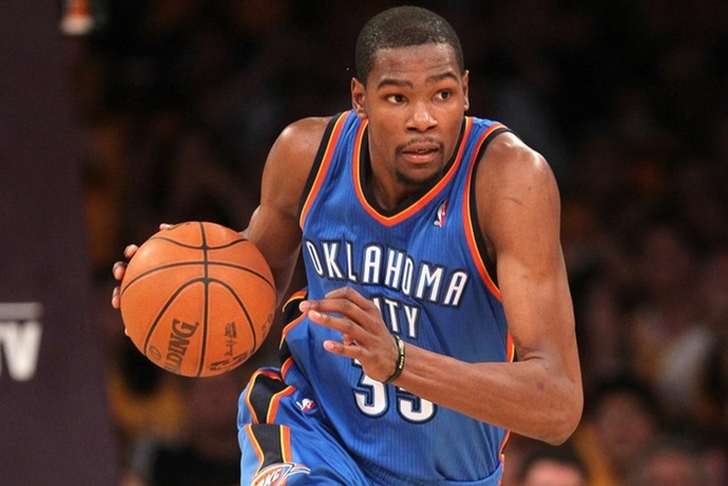 The start of NBA Free Agency is nearly here, which means the Summer of Durant is here. The Oklahoma City Thunder forward is the biggest target in this year's free agent class and free agency won't truly start until Kevin Durant picks his team. Nearly every team wants to sign Durant, which is why there's been plenty of rumors around him.

Teams can't negotiate with Durant, or any other free agent, until July 1st. However, no free agent can officially sign with a team until July 8 - with the week between known as the "July Moratorium" - but teams across the league are already lining up their pitches to land the superstar. Here are all the latest news and rumors surrounding Durant's free agency.

Who Is Getting A Meeting?
Step one to landing Durant is getting a meeting with him. Not every team that wants him is going to get that. The Warriors, Thunder and Spurs have already landed meetings, but they aren't the only ones that will end up with one. USA Today reports the Los Angeles Clippers, Boston Celtics and Miami Heat will likely get meetings as well. However, the Los Angeles Lakers and Durant's hometown Washington Wizards won't. The New York Knicks helped themselves by trading for Derrick Rose, but Durant hasn't committed to a meeting and that doesn't bode well for their chances.

Heat And Warriors Have A Chance With Durant?
Further narrowing down the above list is an agent who spoke with The Oklahoman.

"So Golden State and Miami become the only real players," one agent said. "It's too hard to justify a move to Los Angeles (Lakers) or New York because they are not close to winning. Houston's out."

However, Anthony Slater, also of The Oklahoman, puts the Heat in the longshot hopeful category. He lists the Warriors are the top threat to the Thunder, who remain the favorite. Meanwhile, the San Antonio Spurs look like the dark horse threat.