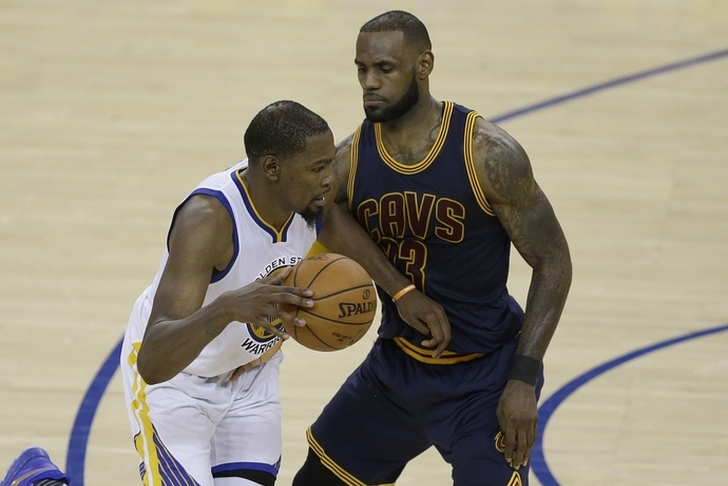 The first half of Game 2 of the NBA Finals was nothing if not fast-paced and exciting. In a high-scoring first half, the Golden State Warriors cling to a 67-64 lead over the Cleveland Cavaliers.

As a bonus for the Warriors following a Game 1 win, they got head coach Steve Kerr back. He's missed most of the playoffs as he deals with complications from a back injury.

Oracle Arena was excited for Steve Kerr to make his return to the court. #DubNation pic.twitter.com/MJ48t37zCr

Kevin Durant chucks up a 3-pointer to beat the shot clock and makes it! #DubNation pic.twitter.com/zQgX88zoLM

Stephen Curry got to the line an NBA Finals-record 10 times in the first quarter, hitting all 10. He has 15 points at the half with four assists.

Welp, someone forgot to switch onto Stephen Curry. #DubNation pic.twitter.com/MAwiMZA2L1

Klay Thompson has already surpassed his Game 1 scoring, with 11 points and four rebounds.

Klay Thompson gets the and-1 finish! #DubNation pic.twitter.com/NohLMpgvil

LeBron James has shouldered the load again for the Cavs. He is already approaching a triple-double with 18 points, 10 assists and six boards. He does have three turnovers.

LeBron James throws down a violent dunk after the steal! #DefendTheLand pic.twitter.com/rIZEnX1kat

Kevin Love started the game hot, hitting his first four shots. He has 15 points and three boards in a strong first half.

Kyrie Irving has been off, with 10 points on 4 of 11 shooting. He has three turnovers against two assists. He did hit a buzzer-beating shot to end the half, however.

Kyrie Irving gets the buzzer-beating floater to fall! #DefendTheLand pic.twitter.com/N9zYoyJFGA

The Cavs' bench has been much better, led by Kyle Korver's and Iman Shumpert's six. The Warriors' 12 turnovers, after only four in Game 1, have helped keep the Cavs in the game. Curry has six of those.