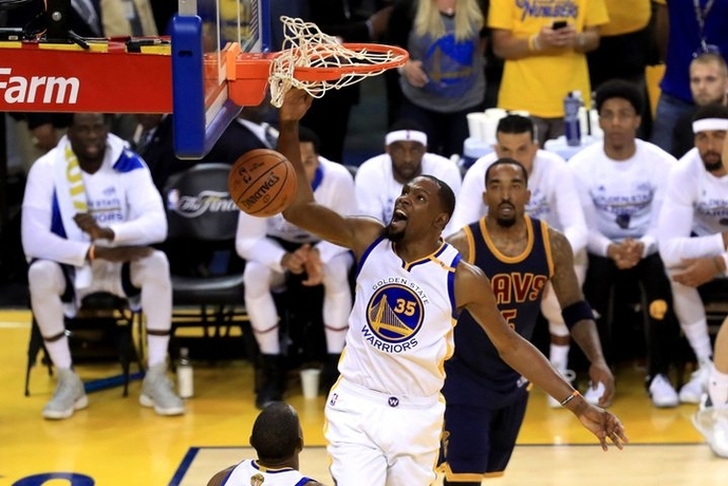 After plenty of non-competitive NBA playoff games, Game 1 of the NBA Finals is shaping up to be a great matchup. The Golden State Warriors lead the Cleveland Cavaliers 60-52 after the first half of Game 1 and it was full of impressive highlight plays. LeBron James and Kevin Durant led the way for their teams, but they certainly weren't alone in putting up big numbers.

Durant has 23 points, six assists and four rebounds in a strong first half effort.

Draymond Green lobs one up to Kevin Durant for the slam! #NBAFinals #DubNation pic.twitter.com/OeOLrreIl9

James already has a double-double with 19 points and 11 rebounds. He also has four assists, but seven turnovers as well.

Even LeBron James was surprised he was so open for the dunk. #NBAFinals #Defendtheland pic.twitter.com/uaPQsJT7VY

Stephen Curry has also played well. He has 12 points, six assists and four rebounds. He's pulled defenders away from Durant in transition, leading to easy dunks.

Kyrie Irving picked up right where he left off in last year's NBA Finals. He has 17 points.

No other player in the game has reached double-figures. The highlight of the half was Andre Iguodala hitting a buzzer-beating 3 before the end of the first quarter.

This is what the #NBAFinals are supposed to be like. Andre Iguodala hits the buzzer-beater 3-pointer to cap a crazy 1st quarter #DubNation pic.twitter.com/Ammt33x827