Here’s Why The Entire Country Hates The Warriors 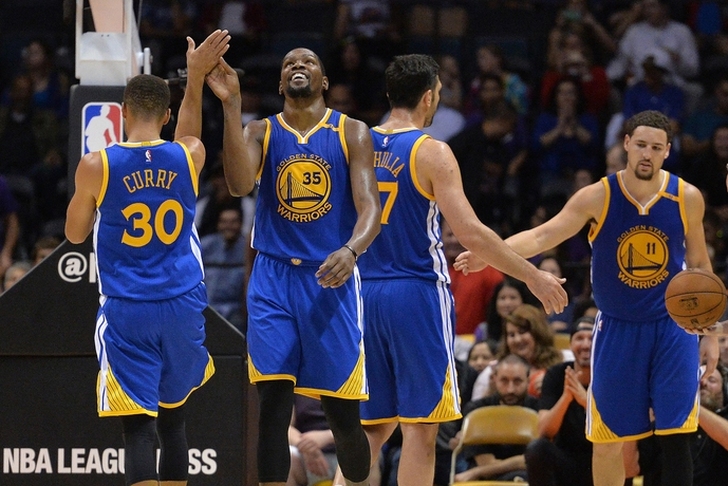 The Golden State Warriors are easily the most hated team in the NBA. But why are self-admitted Super Villains of the NBA so hated by nearly everyone across the country. Ten of the biggest reasons are listed below, with photo and video evidence.

Just because a reason is listed below doesn't mean it's a valid excuse to hate the Warriors. It's just an explanation of why (i.e. don't shoot the messenger). There are also some more reasons that didn't make the cut. With that in mind, here are 10 reasons why (almost) the entire country hates Golden State.

Green has gotten better this year about not kicking players where the sun doesn't shine, but that hasn't changed his perception around the league. Sure, maybe, it's a "natural kicking motion," but others around the league (fans, players, staff members), have a different word for it: dirty. Those plays have helped make the fiery Green into one of the more hated NBA players.

Believe it or not, Curry's mouthpiece-chewing habit gets a lot of attention. ESPN, the Wall Street Journal and the New York Times have done lengthy pieces on the subject. Some fans (as you can see in the above video) hate Curry's mouthguard-chewing habit because it makes him look a little smug and cocky when he's doing it. It annoys them, but what should really annoy fans is that someone paid over $3,000 for a used one. That's just nasty and a waste of money. It's not like the buyer is going to use it, I hope. Curry has also used his mouthpiece as a weapon, hitting the son of the Cavs minority owner in frustration of foul calls in the Finals last year.

People like to cheer for the underdogs and after three straight NBA Finals appearances, that's clearly not the Warriors. And frankly, this team is borderline-unfair good. There's Stephen Curry, the best shooter in the NBA and Klay Thompson, one of the best 3-and-D players. Draymond Green (more on him below), can do everything for the Warriors: scoring, passing, defense, etc. And that's not even mentioning Kevin Durant, who has a longer reason below. It's clear the Warriors are the best team in the NBA and that makes them targets. People like to cheer against the best and that's true across all sports. Metta World Peace basically said the same thing when asked why many players don't like the Warriors.

The Warriors won 73 games and nearly won the NBA Finals in 2016 and then they went out and added a top-3 NBA player in Kevin Durant. That's almost cheating and it immediately casted the Warriors as the villains for many in the NBA. LeBron James was ripped when he created a super team with Dwyane Wade and Chris Bosh in Miami, but for many, what KD did was worse. He left a team (the Thunder) for a team (the Warriors) that he nearly beat the previous season. Durant calling his decision "the hardest road" didn't do him any favors either. Thunder fans might never forgive Durant and it rubbed a lot of fans the wrong way. It was viewed as a cop-out, electing to join a team he can win a title with more easily, rather than trying to beat that same team. There's a real argument that Durant heading to the Warriors was bad for the NBA.

Look bandwagon fans are going to be a thing for every team that finds success. But the sudden influx of Warriors fans doesn't help. Make no mistake, there are true Warriors faithful, the ones who packed Oracle Arena even when the Warriors sucked. But for many, including those in the Bay Area, their fandom started around 2015. If you find a Warriors fan outside of California and they didn't live in the Bay Area previously, they're probably a bandwagon fan.

Plus, the Bay Area itself is full of front-runner fans. No one like the Athletics, but everyone is a SF Giants fan. And in recent years, the popular NFL team has flipped from the 49ers to the Raiders. I wonder why.

Owner Joe Lacob's comments to the New York Times in March 2016 article really rubbed pretty much everyone outside the Warriors the wrong way.

"We've crushed them on the basketball court, and we’re going to for years because of the way we’ve built this team," Lacob said. "We're light-years ahead of probably every other team in structure, in planning, in how we’re going to go about things. We’re going to be a handful for the rest of the NBA to deal with for a long time."

That's over-the-top arrogance and hubris (many were happy the Warriors blew that 3-1 lead to the Cavs last year). If you want to get everyone to hate you, there aren't many better ways than to say "we're so much better than everyone."

Every NBA player complains about calls. Watch LeBron James, Chris Paul or pretty much any superstar and they'll protest any call that doesn't go their way. That first one above was pretty funny, because multiple Warriors reacted in the same way at the same time. But that's not the only example. I mean, Draymond Green runs down the court in disbelief every time a foul is called (and about 90 percent of the time, it was a foul). The other videos above provide more examples of the Warriors complaining and it does get annoying. The video of Curry throwing his mouth piece is the third one.

8. The Celebrations (Before The Basket)

As you can see from the above videos, the Warriors (mostly Stephen Curry) love to look away and celebrate before the shot falls. It makes for a good highlight and a good celebration, but it's kind of disrespectful. The Warriors and their fans love it (as they should), but it rubs everyone else the wrong way.

It can get a little annoying when the cameras keep cutting to the Curry family (father Dell, wife Ayesha, daughter Riley and moher Sonya). We get it, they're at the game.

Plus, there was the whole Ayesha Curry claiming the NBA is rigged, because the Warriors players aren't the only ones who whine.Riley Curry hijacking a press conference (see below), also upset some people but that really shouldn't count because it was adorable.

It's not Curry, the Warriors or the family's fault they get attention during the game, but not everyone likes it.

10. The Bay Area Is Overrated

Yeah, the food is great and the weather is normally nice (though it's not Southern California weather). But the Bay Area is overrated. BART (the main public transit) is always delayed, San Francisco itself is pretty dirty and the prices for everything are stupid high. In the case of the Bay Area, the rent really is too damn high, as it's the most expensive city in America. Everything is cramped, especially in the city of San Francisco. There's extreme gentrification and you can knock out all of the really cool attractions (and they are awesome) like Alcatraz, Land's End, Pier 39 and more in one weekend. Oh, and don't actually go into the city of San Francisco, because there's human feces everywhere and you might get stabbed.

Also overrated: In-N-Out. Like, it's a good burger joint, but it's not The Greatest Thing Ever some Bay Area natives make it out to be. Five Guys and Whataburger are better. @ me In-N-Out truthers.