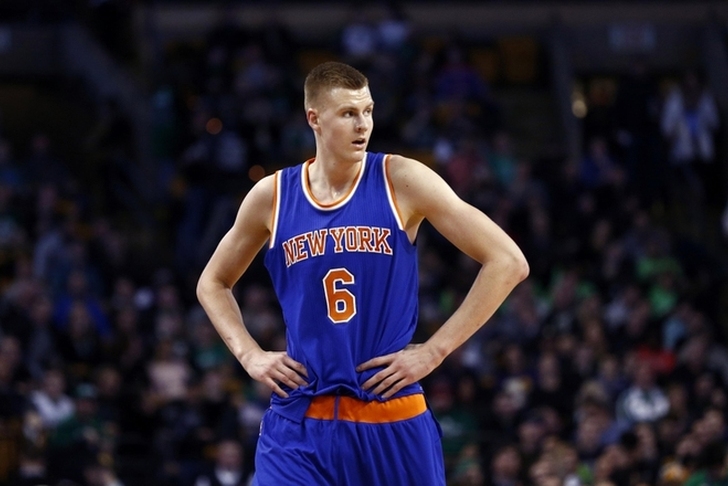 In what's already been a chaotic lead-up to NBA Draft, the latest rumor is that the New York Knicks are actually open to trading Kristaps Porzingis. It's a surprise development, since the 21-year-old, 7-foot-3 big man is one of the best young players in the NBA. Yet, Phil Jackson is open to dealing what should be the star of the franchise for the next decade. Instead of keeping Porzingis happy, the Knicks have managed to upset him and are no considering dealing him away.

With Porzingis apparently available, here's a complete list of which teams should attempt to trade for Porzingis. Of course, not every team has the assets, but many will at least make an attempt. The Knicks want picks and at least one young player back. With that in mind, here's every team that should try to trade for Kristaps Porzingis.

Atlanta Hawks
The Hawks aren't exactly flush with assets, but they do have some firsts and some younger players like Taurean Prince. It's surely not enough to get a trade done, but it's worth calling Jackson.

Boston Celtics
The Celtics surely have the assets to make a deal, with tons of picks and numerous young players. Danny Ainge has almost been more interested in playing NBA 2K GM and just getting all of the picks, but getting a player like Porzingis might be enough to get him to part with his assets. If a trade actually did happen, Boston would surely be near in the mix.

Charlotte Hornets
Well Jackson did reportedly love Frank Kaminsky coming out of Wisconsin, though Kaminsky hasn't developed into anything special with the Hornets. Would a package of Kaminsky, picks and another player or two be enough?

Chicago Bulls
If the Bulls landed Porzingis, that would effectively end the Jimmy Butler trade talks. The Bulls, however, don't exactly have a ton to offer compared to other teams. Maybe Jackson would do his old franchise a solid and ship to Chicago Porzingis anyway.

Cleveland Cavaliers
The Cavs would likely have to include Kevin Love, but maybe they could get LeBron James' buddy Carmelo Anthony too. The Cavs have limited picks, but they do have a bright, young GM who has made some quality moves in the past ... Oh. That's right.

Denver Nuggets
Denver lacks high picks, but they have plenty of talented young players. If the Knicks are looking for a pu pu platter deal for Porzingis, Denver has the pieces to make a quality offer.

Detroit Pistons
A Porzingis-Andre Drummond tandem is enticing, but do the Pistons have the assets? I doubt a package of middling (at best) firsts and Stanley Johnson is enough.

Golden State Warriors
It wouldn't even be fair.

Houston Rockets
Porzingis on Houston would be fun, since he'd get to shoot a ton of 3s. But, what do the Rockets have the Knicks would want?

Indiana Pacers
Here's how to get Paul George to stay in Indiana. Although, outside of giving up Myles Turner, do the Pacers have the assets to land Porzingis?

Los Angeles Clippers
With limited picks and young players, the Clippers don't have much of a chance. Unless they wanted to drastically alter their roster.

Los Angeles Lakers
The Lakers could be willing to move the No. 2 pick, which is a really good starting point in a Porzingis trade. They could also look to include a Julius Randle, a Jordan Clarkson or a DeAngelo Russell. I doubt they'd move Brandon Ingram, but the Lakers actually have the pieces to pull off a deal.

Memphis Grizzlies
Memphis lacks the picks and young players to pull off a deal. Their core is basically set.

Miami Heat
Never doubt Pat Riley, but the Heat are down next year's first. They'd be willing to dump this year's first, but they might not have the assets to get Porzingis from the Knicks.

Milwaukee Bucks
Jabari Parker is the power forward, but he's battled injury. Porzingis on the Bucks with Giannis Antetokounmpo sounds awesome, but the Bucks might not have the pieces to pull off a deal, since Antetokounmpo is untouchable.

Minnesota Timberwolves
The TWolves have been linked to Jimmy Butler, so why not get Porzingis to play the stretch-four role. Porzingis on Minnesota makes them a terrifying long-term threat. The question is what the Knicks would want. Firsts are a given, but would the TWolves need to give up Zach LaVine and/or Kris Dunn? The Knicks did have interest in Ricky Rubio before the trade deadline.

New Orleans Pelicans
Instead of going small, the Pelicans elect to adapt the all big man strategy, occasionally used by the CPU in NBA 2K.

Oklahoma City Thunder
Russell Westbrook and Porzingins is a fun match. But unless the Knicks are willing to take on someone like Enes Kanter or Victor Oladipo as the focal point of the trade, it's not happening.

Philadelphia 76ers
Does Porzingis trust the process? What if the 76ers offered Dario Saric, whichever picks the Celtics don't get and other pieces? Is that enough for the Knicks to pull the trigger and allow a core of Fultz-Simmons-Porizings-Embiid? The 76ers would be a real life 2K team.

Phoenix Suns
The Suns actually have the pieces to pull off a deal. They have the No. 4 pick this year and future Heat firsts. They have two young PFs in Marquese Chriss and Dragan Bender, plus some other young options. If the Knicks actually do trade Porzingis, the Suns should be considered one of the favorites.

Portland Trail Blazers
Multiple firsts this year gives the Blazers a chance, but they lack young pieces on cheap contracts. Instead, guys like Allen Crabbe are locked into big money deals.

Sacramento Kings
The Knicks are trying to take away the Kings' role as most dysfunctional franchise. Still, the Kings getting Buddy Hield and Porzingis is an intriguing core. They have two firsts, but likely lack the non-Hield young players to pull off a deal.

San Antonio Spurs
It would be just classic Spurs to land Porzingis. But unless the Knicks want LaMarcus Aldridge, the Spurs don't have much to offer, since Kawhi Leonard isn't going anywhere.

UP NEXT: The Latest NBA Draft Rumors

Toronto Raptors
The Raptors are more likely to try to bring back Serge Ibaka than actually pull off a deal for Porzingis. Unless of course a bunch of late firsts, Norman Powell and Bruno Caboclo is enough.

Utah Jazz
Porzingis and Rudy Gobert next to each other sounds awesome. Getting Porzingis would likely convince Gordon Hayward to stay. The Jazz can offer late firsts, Derrick Favors/Trey Lyles and maybe more pieces like a Dante Exum.

Washington Wizards
John Wall would love this, but do the Wizards have the pieces? They lack a first round pick and don't have enough young pieces to compensate.