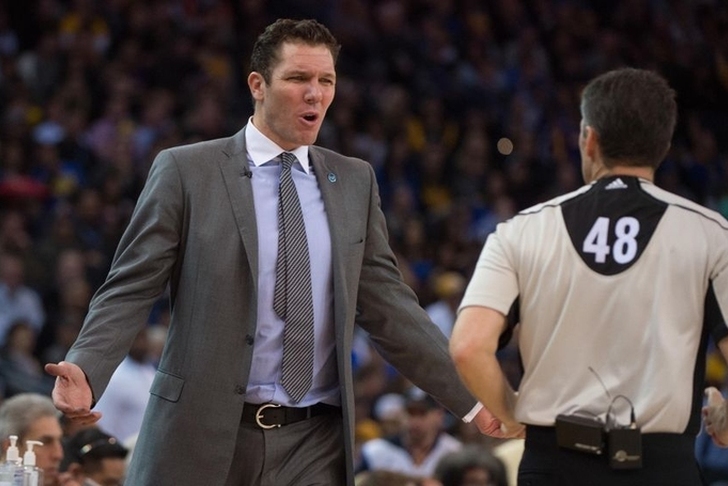 Golden State Warriors assistant coach Luke Walton will be the hottest candidate on the open market this offseason after leading the Warriors to the best start in NBA history, and there's no shortage of opportunities for him. Here are the five teams he is most likely to coach next season - assuming he leaving Golden State to become a head coach.

5) Sacramento Kings
The writing is on the wall in Sacramento - George Karl is expected to be fired as soon as the season ends. Owner Vivek Ranadive is prone to hasty judgment calls, and it wouldn't surprise us if he decided to swing the pendulum from one extreme (a veteran coach like Karl) to the other (a rookie coach like Walton).

4) Chicago Bulls
Chicago was an absolute disaster under first-year head coach Fred Hoiberg, missing the playoffs after being expected to compete with the Cavs at the top of the Eastern Conference. There are already rumors swriling that Hoiberg won't get a chance to return next season, and if that's the case, there's no doubt Walton will be at the top of their list. The opportunity to coach a talented backcourt like Derrick Rose and Jimmy Butler would be perfect for Walton's up-tempo system.

3) Houston Rockets
Speaking of talented backcourts, having the chance to coach someone like Harden with a playoff-ready roster could be very appealing to Walton. Houston would give him the best chance to be successful as soon as he takes over - but stability is definitely a question given the way they fired Kevin McHale at the start of this season.

2) New York Knicks
Walton played under Knicks president Phil Jackson for several years with the Lakers - a relationship that still holds strong today. His loyalty to Jackson will put the Knicks near the top of his interest list, as is the chance to build a roster centered around promising rookie Kristaps Porzingis. The only question is whether Walton wants to be a part of a rebuild or wants a ready-made roster.

1) Los Angeles Lakers
If Walton goes for a rebuild, he's going to Los Angeles. The Lakers are all but guaranteed to fire head coach Byron Scott this offseason, and it's Walton's job if he wants it. He has heavy ties to the organization, playing for the Lakers from 2003-2012 while winning two titles before joining the Warriors as an assistant. It would be a shock if he ended up anywhere else.