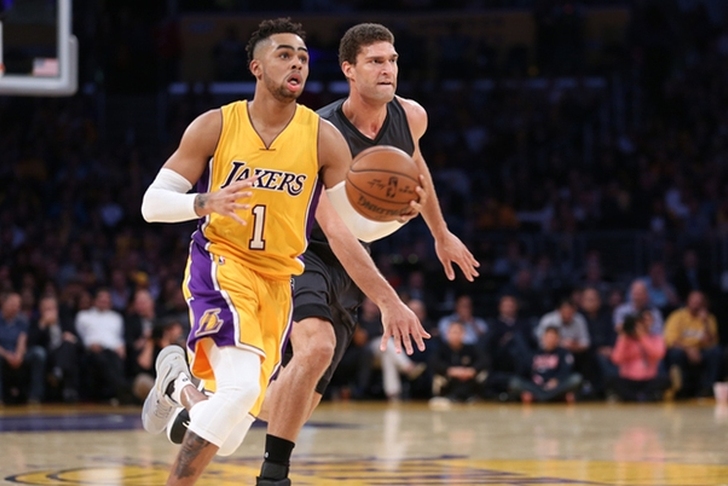 The Los Angeles Lakers and Brooklyn Nets pulled off a blockbuster trade involving Brook Lopez and D'Angelo Russell Tuesday night. So far, it's the highlight of a buzz and rumor-filled NBA offseason. It's a trade made with the future in mind for both teams. The exact details of the trade are below, plus grades and analysis.

Nets Grade: A+
I love what the Nets did, though the grades everyone gives will come down to how they view Russell. He's the focal point of this deal and he's now the face of the Nets' franchise. Brooklyn has been searching for one and without their first round pick this year or next year, they were going to have a tough time finding one. In the end, it took taking on Mozgov's awful contract and shipping away a late first and C Brook Lopez. The disaster that is the Mozgov contract isn't a big deal for the Nets, who are still flush with cap space. Lopez was a key piece, but they finally found a deal that was worth it for them to trade him. Russell has his problems and there's a reason the Lakers weren't able to find a team in the lottery willing to take him. But it was just a few years ago that he was the No. 2 overall pick and the 21-year-old improved last year. Getting Russell was a risk that is without a doubt worth it for the Nets. They have a potential franchise star and it's up to Kenny Atkinson and the coaching staff to develop him.

Lakers Grade: B-
There was buzz earlier this week that the Lakers could flip Russell for a lottery pick, with Luke Kennard and/or Zach Collins the targets. I would have hated that deal, but this one is much better. I still think the Lakers could have played Lonzo Ball and Russell together, but they did get some value back. The underrated Lopez is an instant upgrade over Mosgov and he'll be a key starter this year. Of course, the Lakers could try to flip Lopez as well, but that seems unlikely. Getting the No. 27 overall pick gives them another asset to use via the draft or for a potential Paul George. Perhaps most importantly, getting rid of Mozgov's awful contract was huge. With Mosgov gone, the Lakers have cleared the cap space to eventually sign George to a long-term deal. And if they can make a few other moves, they could have space for another max contract (LeBron James?) in the Summer of 2018. I'm still Pro-Russell and dealing Jordan Clarkson or even Julius Randle would have been better, but I understand what the Lakers are doing with this trade.