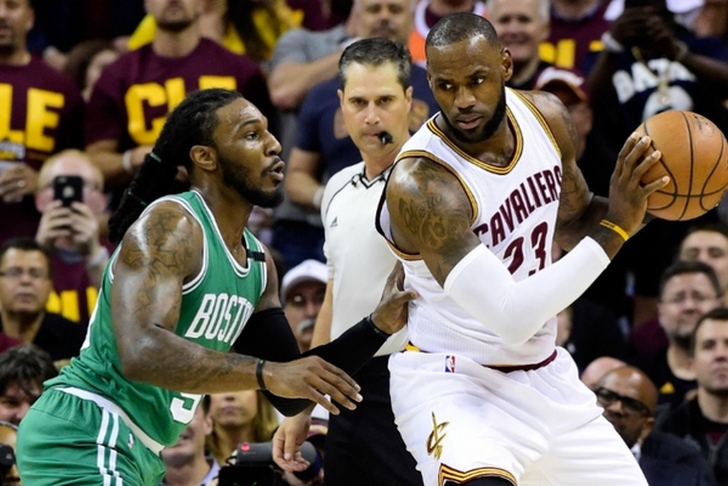 The Boston Celtics are one half away from evening the Eastern Conference Finals at 2-2. The Celtics picked up right where they left off in Game 3 and are up 57-47 at the half against the Cleveland Cavaliers. The Celtics led by as many as 16 in the first half.

The #Celtics picked up where they left off, going on an 11-0 run. pic.twitter.com/FwgflLeKxN

LeBron James struggled in Game 3 and is now in foul trouble. He has four fouls and only 10 points, three rebounds and two assists.

LeBron James has picked up his fourth foul of the game and the #Celtics are up in the second quarter! pic.twitter.com/YIBb1QMH6p

Kevin Love fires a deep pass to LeBron James, who throws down the slam! #DefendTheLand pic.twitter.com/S27DiZfTpP

Kevin Love and Kyrie Irving have shoulder the load with James in foul trouble. Love has 10 points and seven boards, while Irving caught fire with James on the bench. He has 18 points.

The rest of the Cavs have been quiet. Outside of the Big 3, the rest of the team has just nine points. Iman Shumpert has five of those, including this awesome dunk.

The Celtics have received scoring contributions from every player of their eight-man rotation thus far. Avery Bradley Jae Crower each have 13 points to lead the way. After his massive night in Game 3, Marcus Smart has not made a shot from the field.