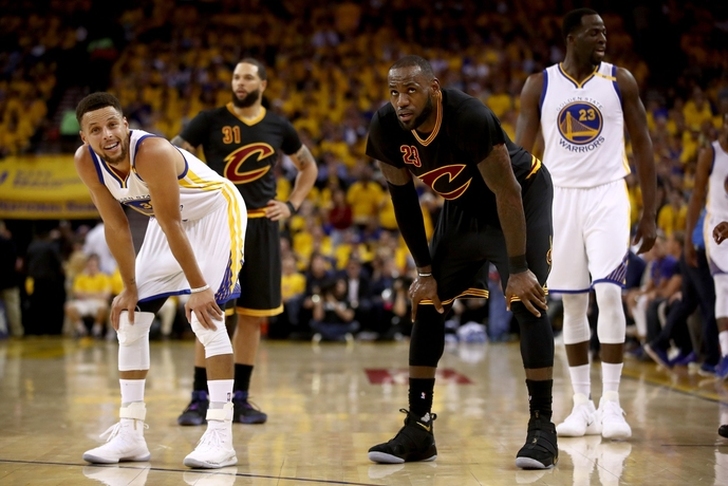 The Golden State Warriors have yet to lose a game in the NBA Playoff and are up 2-0 in the 2017 NBA Finals against the Cleveland Cavaliers. The Warriors have picked up two blowout wins at home, but now the series shifts to Cleveland. Can the Cavs repeat what they did last year and pick up a must-win game tonight? Here's a preview and prediction for Game 3.

What They're Saying About The Golden State Warriors:
The Warriors Are Making The Cavs Beat Themselves (ESPN)
With 2-0 lead, Warriors must avoid early onslaught from Cavs (CSN Bay Area)
Three keys for the Warriors in Game 3 against the Cavaliers (San Jose State Mercury News)
Here’s Why The Entire Country Hates The Warriors (Chat Sports)

Key To The Game: Can The Other Cavs Players Step Up?
LeBron James has been great, even posting a triple-double in Game 2. Kevin Love has played well alongside him, averaging 21 points and 14 rebounds. But the rest of the Cavs have struggled. The one big name: Kyrie Irving. There's been some rumors that he's not totally healthy, but whatever the reason, he has not played well enough. He's putting up 21.5 points per game, but has averaged just under 33 percent shooting from the field. That's not remotely close to getting it done. For the Cavs to win a game, let alone the season, Irving must step up.

He's not the only one. J.R. Smith was instrumental last year on both ends of the court, but he's been a non-factor so far. He has just three points, on 1 of 6 shooting, while recording five fouls. He's not as effective on the defensive side as he was last year and hasn't done anything on offense outside of the very first made shot of the series. It's time for J.R. to be J.R.

The Warriors lack a reliable top-tier big man, so the expectation was that Tristan Thompson would feast on the glass, get second chances and help as a rim protector. So far, he's averaged four points, four rebounds and zero blocks per game.

Those aren't the only players who have struggled so far (Kyle Korver has missed open shots, Deron Williams has had issues), but those are the big ones. If the Cavs are going to get back in this series, they need the non-LeBron players to step up.

Prediction: Cavs win 110-108
The Cavs finally pick up a win in Game 3. They're back in Cleveland and playing at home should help pick up some of the role players (and hopefully Kyrie Irving). James continues to play well and the NBA gets lucky and they don't have to deal with a sweep. It's a thrilling game, giving the NBA a badly need close Finals game. This series is still the Warriors to lose, but the Cavs pick up a win.