Why the Thunder will NOT beat the Clippers - Oklahoma City vs. Los Angeles Playoff Preview &amp; Predictions 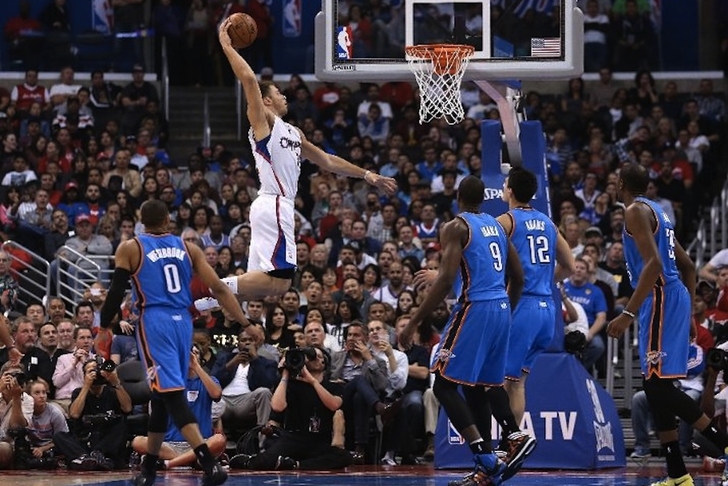 Both the Clippers are coming off of tough, grueling first round matchups with both pulling out Game 7 wins at home. Los Angeles survived the whole Donald Sterling saga while Oklahoma City climbed back from a 3-2 hole and had to deal with "Mr. Unreliable" (which was a total joke in my opinion).

One of the big takeaways from OKC's round with Memphis is that this Thunder team is a lot more flawed than people like to think. Yes, the Grizzlies are a team that's really tough to beat, and they always play really well against the Thunder, but it was clear that OKC hasn't fixed the issues that have kept them from winning a championship.

Outside of Russell Westbrook and Kevin Durant, they really struggle scoring. A big part of that is their lack of ball movement on the offensive end, and they don't have enough players who can consistently create their own shots and knock them down. Their defense is predicated on gambling for steals, which often leads to players being out of position and easy points for the opposition.

The Clippers, on the other hand, looked great. Golden State was a legitimate threat to make a deep playoff run for the second year in a row and with the Sterling distraction for LA, it seemed like a real possibility. But head coach Doc Rivers got his team to regroup and got a GREAT series from DeAndre Jordan that pushed them through. Blake Griffin and Chris Paul were their usual selves, and the stage is set for them to carry this momentum deep into June.

That being said, this is going to be one of the best series of the entire postseason, which is saying something considering how insane the first round was.

OKC and LA split their season series, as you'd expect in a matchup of two of the league's top teams. They even split the two games on each team's home court.

Each squad has their "Big Two" - Westbrook and Durant for OKC, Paul and Griffin for LA - but Jordan is the only other guy in the series who can put himself in that category. He's averaging a MONSTER double-double in the playoffs (12.1 ppg, 15.1 rpg), and leads everyone with four blocks a game.

Plus, HE'S ACTUALLY MAKING FREE THROWS!!!!! Well, kinda. He's shooting 51% from the line (which isn't good), but it's a full 10 percentage points higher then how he was shooting in the regular season.

If he can keep this level of play up, it's going to be very tough for anyone to beat the Clippers in a seven-game series.

Oklahoma City wins IF: Westbrook's size and quickness gives Paul major problems and KD does what he always does. Serge Ibaka outplays Jordan while Reggie Jackson and Jeremy Lamb provide a big scoring punch off the bench.

Los Angeles wins IF: Blake Griffin is the best player on the floor as him and Jordan absolutely dominate the paint.

This series will go six or seven games, and every single one will be close. However, I expect OKC's bench to get totally exposed by the Clippers and Doc Rivers to severely out-coach the Thunder's Scott Brooks. Los Angeles is coming together at the right time and playing their best basketball of the season, and Oklahoma City is not.