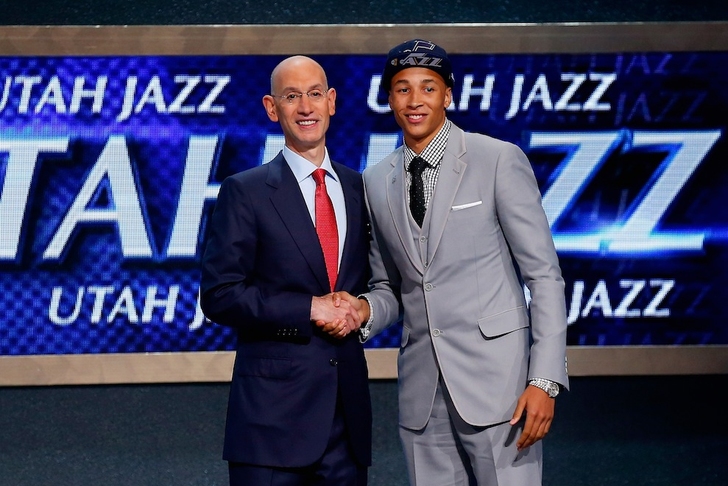 After nearly a year of speculation, the "Best Draft Class since LeBron" is officially in the NBA. Who managed to snag the right pieces from that talented group to make their team a whole lot better?

Adams will help pack a scoring punch to one of the NBA's worst offensive teams, and Memphis-native Jarnell Stokes will only add to the Grizzlies' strength down low.

Capela has the potential to develop into a nice player but may have to spend more time overseas. Johnson was the best player available with the 42nd pick, but I'm not sure how many chances he'll get with Houston's deep backcourt.

Anderson fell, and the Spurs snatched him up. At 6'9", many claim he's the best passer in this draft. Picture him as a young, skinny Boris Diaw.

Smith will be a spark off the bench immediately for the Pelicans, but he won't develop into more than that. Still, he's a plus for a New Orleans team that needs more depth.

Traded both 34th and 51st picks to New York Knicks

Exum was projected as a top-3 pick, and could fit well in Utah's backcourt alongside either Trey Burke or Alec Burks, both of whom are shooters. Hood was supposed to go in the late lottery, so grabbing him late in the first round was a huge value. His polished offensively game will be a big addition and will challenge Gordon Hayward for playing time.

Denver needed a shooting guard and got the second best one in the draft with the 19th pick, which was pretty remarkable. They got some insurance at that position with Marble late in the second round. However, the two foreign big men, Nurkic and Jokic, still need some time to develop into the players they were drafted to be.

LaVine is a great pick...except it was pretty obvious draft night that he wanted no part of being in Minnesota. Robinson will provide the Wolves with some much-needed athleticism, and Gentile is just a draft-and-stash guy we probably won't hear from again.

What did we learn about the Thunder in the playoffs? Their bench can't score. With two great opportunities to draft guys to help fill that need, they blew it.

McGary is a good player and Huestis is a solid defender, but they're a lot like guys OKC already has. Oklahoma City needed something different and they just didn't do it.

No picks in draft

Randle was a dominant force in college and is a double-double machine. It's also a big plus that Kobe Bryant likes him:

Clarkson is a scoring combo guard that gives LA an upgrade over their current bench guards.

The Kings needed shooting and Stauskas was the best one in the draft. The problem is they drafted a shooting guard (Ben McLemore) in the lottery last year, too. Sacramento thinks the two can play together and I agree, but there are better directions they could've gone.

Warren is the excellent scorer that Phoenix needed, but the Ennis pick was confusing. The Suns now have three point guards on their roster that all expect to play major minutes, which is going to develop into a problem. Bogdanovic is a shooter that's still developing, and Brown is a seven-footer they're just hoping can make the roster.

The Clippers needed rebounding, but they went after shooting instead. Wilcox has the potential to be a good bench player, but he has the same skills as the Clips first round pick last year, Reggie Bullock.

No picks in Draft

What did you think of your team's draft? Tweet your thoughts and responses to @brauf33.

What are the potential landing spots for the Top 11 Undrafted Free Agents?

Reliving the Top Moments of the NBA Draft through Twitter