UPDATED: The Top Flops of the NBA Postseason (So Far) 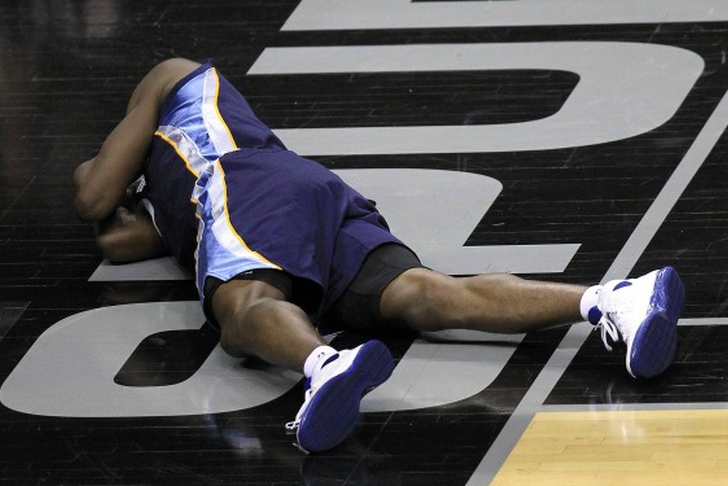 Forget the Golden State Warriors' thrilling run. Forget the fantastic, physical first-round series between the Chicago Bulls and the Brooklyn Nets. The real story of this 2013 NBA postseason has been the litany of tremendous acting job seen on a professional basketball court. Seen by many as an utter disgrace to the game, flopping has nonetheless become an integral part of NBA strategy, according to the chosen one, at least.

First, check out the NBA's official video highlighting their official flopping policy. There are some great ones in here from the regular season.

Now, without further ado, here are the best(?) flops so far in the NBA postseason. Note: This post will continue updating as more flops undoubtably occur.

See the flop itself isn't that egregious here. Mario Chalmers falls over trying to "draw a foul," as it was rather diplomatically put. Thankfully there was no call, giving Paul George the opportunity to drain a wide open three. The best part though, is that George then calls out Chalmers.

Mr. James has really turned into a staple on this page. This is his playoff-leading third notable flop so far. He's already been fined once, and this could earn him another. Paul George is coming around a screen and sort of rubs LeBron a tiny bit with his shoulder. Very minimal contact. But LeBron is his LeBronian way completely throws himself backwards. He may have one-upped himself for flop of the year.

Well this has really turned into the series of flops, hasn't it (see following three posts). West goes to post up James, and James spins, falls, and flails his hands in the area before it even looks like West touches him. For his own part, West also threw his hands in the air rather dramatically. Both were fined $5,000 by the NBA, but LeBron's is decidedly worse.

Perhaps not a "flop" because he didn't fall down, Stephenson nonetheless throws his head back quite theatrically after Ray Allen jabbed at him with an elbow. This wouldn't be too bad, except that Allen's elbow didn't ever touch Stephenson. Stephenson was also fined $5,000.

Wade was trapped along the baseline, so he simply threw himself and the ball out of bounds to simulate contact. No dice, Indiana ball. He was somehow magically not fined.

James considerably overreacted to being touched ever so slightly (if at all) by, once again, David West (#21). The refs simply ruled it out of bounds, but the acting is there for everyone to see. He's LeBron, so obviously no fine (I stand corrected. It took a second offense, but see above)

Allen was fouled by the Spurs' Manu Ginobili, and fouled hard. But not hard enough to writher on the ground in pain for ever and ever. Which he did. Most deserved fine ever.

This is really just impressive. Young actually did appear to get elbowed ever so slightly by Carmelo Anthony, but he acted as if he got punched in the face by Mike Tyson. He's not a superstar and he doesn't play for a marquee team, so I'm not sure how he escaped the fine. But he did.

Smith was brushed lightly by the Pacers' David West (#21), who was attempting to set a screen. Smith went flailing convincingly and drew the foul, but also a $5,000 fine.

There really are no words. This has to be hands down the flop(s) of the year. It probably was a legitimate charge, but the backwards propelling in unison is just too much. Interestingly, Fisher was fined, but Martin was not

Pendergraph was being posted up by the Hawks' Josh Smith (#5) and threw himself backwards in an attempt to draw a charge, but to no avail. All he got was a well-deserved fine.

So there you have it. Impressive work, NBA, impressive work. The sadest part is, it seems like the deeper into the postseason we go, the more flops occur.