Thunder-Spurs Game 2 In Review: Is It The Spurs' Time Once Again? 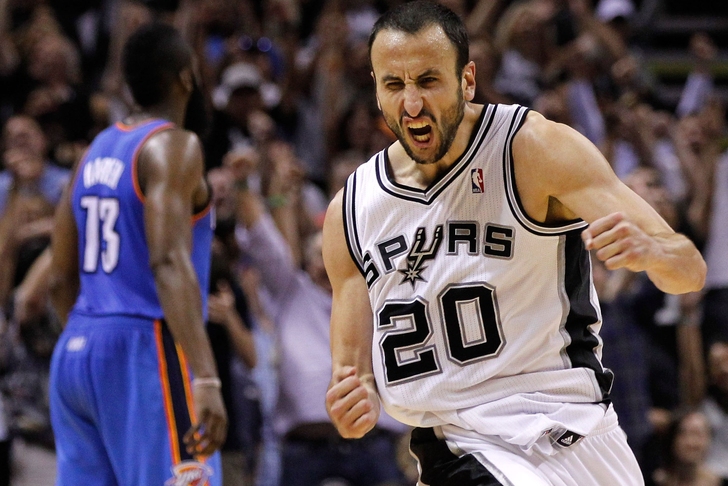 When the Oklahoma City Thunder tightened up down low early, forcing the San Antonio Spurs to settle on shots from the perimeter and mid-range, you'd think that alone would keep the Thunder in the game.

Another extremely poor performance from OKC starters not named Russell Westbrook or Kevin Durant spelled disaster for a Thunder team still reeling from the loss of Serge Ibaka. Starters Nick Collison, Kendrick Perkins, and Thabo Sefolosha combined for four points in the first three quarters. Four. This was unacceptable for a team in need of a spark from somewhere other than the usual sources.

In contrast, the Spurs' balanced offensive attack continued to cause the Thunder fits, despite a spirited first quarter for Oklahoma City. The Thunder led 26-24 after one, before the Spurs reasserted their dominance in the paint in the middle frames. Thus, the game ended earlier than expected.

The Spurs outscored the KD and Westbrook Show to the tune of 67-36 in the second and third. Five players scored in double figures for the Spurs, with Tony Parker leading the way with 22. Danny Green chipped in with 21.

This game looked a lot like the first three games of the Spurs/Blazers series, which is to say that the Thunder got completely outclassed in almost every phase of the game - leading to the worst playoff loss for the Thunder since they moved to Oklahoma City.

The Thunder will have three days to beat themselves up for a dismal showing in San Antonio, before locking horns again with the Spurs on Sunday.

At this point, it almost seems academic that the Spurs will make this a short series. However, Kevin Durant is still Kevin Durant, so the Thunder still have that to cling to. If Scott Brooks can shake his reputation as an ineffective game-planner and the Thunder can find some way to get scoring from more than just two guys, this series is far from over.

Yet, judging from the Oklahoma City Thunder's body language at the end of these first two games, it may take a minor miracle for them to come back and win this series.

Game 3 is at 7:30 p.m. EST on Sunday night, and will be broadcast on TNT. Stay tuned to Chat Sports for all the latest as the series moves to Oklahoma City.