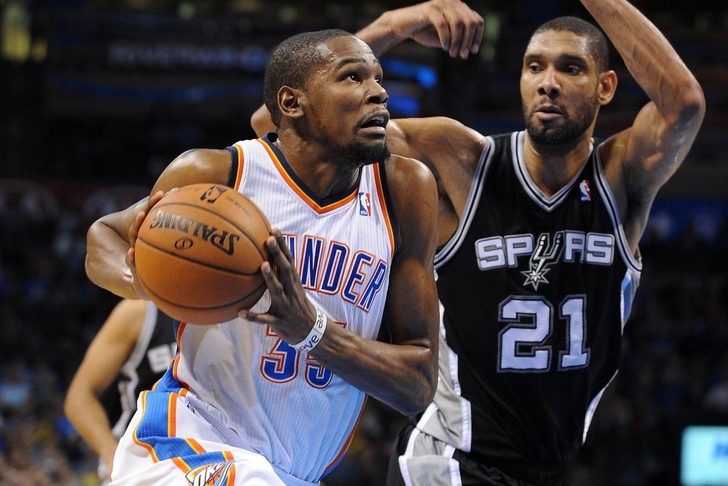 Game one of the Eastern Conference Final matchup between the Oklahoma City Thunder and the San Antonio Spurs will take place tonight at the AT&T Center in San Antonio, with tipoff scheduled for 9:00PM EST.

Latest on the Thunder/What They’re Saying:

Spurs aren't buying that Serge Ibaka is out for the playoffs (Yahoo! Sports)

The entire complexion of this Western Conference Finals series changed with the news that Oklahoma City's Serge Ibaka is out for the playoffs with a calf injury. Ibaka's presence in the lane has given the Spurs fits over the past couple of seasons, and his improved offensive capabilities will be sorely missed by the Thunder. OKC head coach Scott Brooks will likely counter with extended minutes for the likes of Nick Collison and Steven Adams, providing they can stay out of foul trouble.

With Ibaka out, Kevin Durant and Russell Westbrook will not only have to shoulder more of the offensive attack, but will also have to be extremely active against the Spurs' shifty offensive sets. Spurs point guard Tony Parker is nursing a slight hamstring sprain, but should be healthy enough to lead the team's balanced scoring attack for the duration of the series.

As if there was any doubt, Tim Duncan is still Tim Duncan, averaging 15.8 points and 8.3 rebounds per game in these playoffs. Along with a much-improved supporting cast compared to the Spurs team which lost to the Thunder in six during the 2012 Western Conference Finals, the Spurs come into this series as solid favorites to return to the NBA Finals for the second straight year.