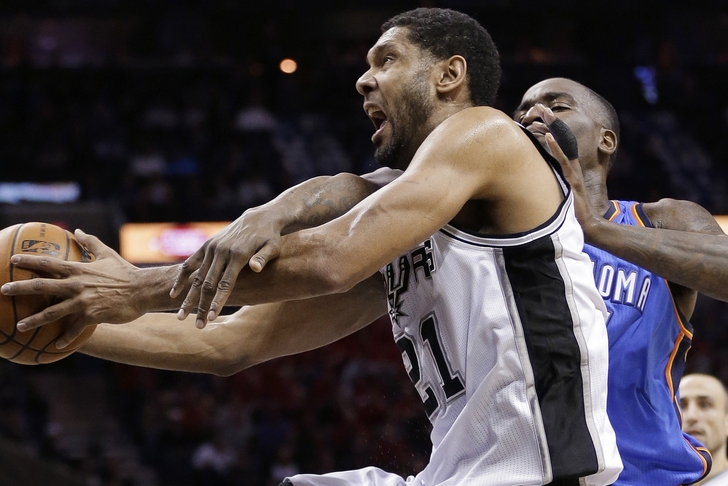 The Oklahoma City Thunder came out undermanned and it showed right away. Serge Ibaka's absence hit the team like a ton of bricks out of the gate, with Tim Duncan lighting it up down low to the tune of 21 points in the first half. The Thunder kept threatening to close the gap, only for the Spurs to put together mini-runs that stretched the lead back to three or more possessions.

This all seemed to change for the first eight minutes in the third quarter, with Kevin Durant using his length to spark the Thunder on D. OKC head coach Scott Brooks went small with his lineup, giving the Spurs fits for most of the third. However, Spurs head coach Gregg Popovich seemed to solve the riddle by the end of the frame, as the team stretched their lead back to seven at the break.

The Spurs picked up right where they left off in the fourth, turning Thunder turnovers into easy points. Most of those points would come in the paint, with the Spurs scoring more than half of their points in the key. The lead continued to balloon as the Thunder began to pack it in during the last five minutes or so.

All in all, the Spurs played Spurs basketball like they always seem to do. That was more than enough for them to hold serve on their home court in Game 1.

The Oklahoma City Thunder need to right themselves from a ball control perspective and quickly. If they continuously turn the ball over against a well-oiled machine like the San Antonio Spurs, it will be a short stay for them in the Western Conference Finals

If the Thunder can build off the defensive intensity which helped them get back in the game in the third quarter, they can very well steal Game 2 in San Antonio. However, if the Thunder team that showed up tonight shows up again on Wednesday, it will be a very somber plane ride back to OKC for Game 3.

Game 2 is at 9:00 p.m. EST on Wednesday night, and will be broadcast on TNT. Stay tuned to Chat Sports for all the latest from San Antonio.