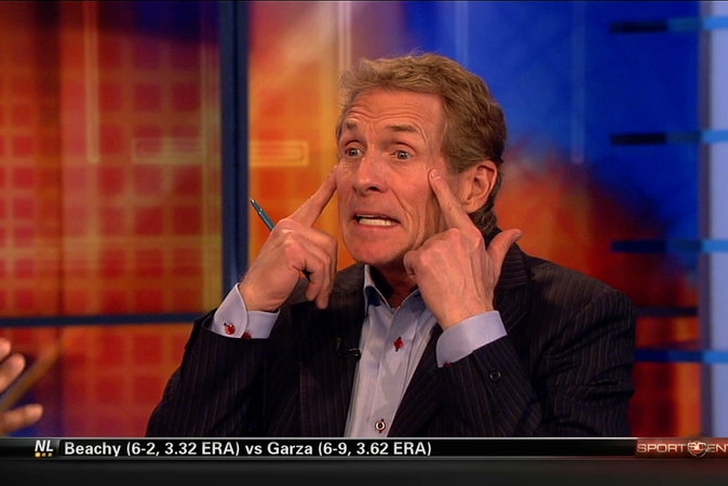 ESPN's Skip Bayless is easily one of the most polarizing figures in sports media today.

Bayless regularly takes unpopular stands in both his writing and on the ESPN show First Take, sometimes in a blatant attempt to get a rise out of both fans and cohorts alike.

Bayless' most controversial talking point has been his repeated bashing of the Miami Heat's LeBron James - a trend which his biggest critics have pointed to as sensationalism for the sake of picking up TV ratings and page views.

One of his biggest detractors is respected Sports Illustrated writer Richard Deitsch, who has taken to Twitter in recent days to take Bayless to task for his deficiencies as a sports personality and writer.

It started with this bold statement about Bayless' real job description on Wednesday.

Everyone at ESPN knows Bayless is paid to troll James & lead the anti-LBJ brigade. Van Gundy/Simmons know full well who the bogeyman is.

That was followed by a plea for honesty from ESPN's vice president of production.

However, it's not just Skip Bayless who irritates Deitsch...

I turned on ESPN to check out the NBA Finals postgame. Stephen A. Smith yelled at me. Back to NBA TV and Chuck and Shaq.

His anger turned back to to Skip Bayless though after a (drumroll please...) LeBron attack piece of his surfaced on ESPN.

That was just the first punch.

Once again, I expect better from Marcia Keegan and others. That space could go to a deserving ESPN writer who would benefit from it. — Richard Deitsch (@richarddeitsch) June 12, 2014

He would let one of his followers take the next shot via retweet.

Deitsch wasn't done. After ESPN writer Wright Thompson's amazing video piece on Brazil and the World Cup was virtually ignored by the company, Deitsch made sure to get in a tongue-in-cheek barb about ESPN's messed-up priorities when it comes to highlighting certain pieces of work.

Who is this Wright Thompson clown? Never heard the guy. You don't exist unless you are shouting on sports TV or writing contrarian columns. — Richard Deitsch (@richarddeitsch) June 12, 2014

When ESPN highlighted Bayless' piece on their home page, Deitsch made his displeasure known. Very known.

Current home page headline on ESPN-com: "LeBron Falls Down On The Job." Links to the Bayless piece. Sometimes, this job breaks your heart.

Don't think that Deitsch wants to hide behind Twitter on this one, though. He wants ESPN to answer for Bayless - and he'd like to do the questioning.

Richard Deitsch is here to save the world. Thank you, Richard.