The Next Sterling? Meet The NBA Owner Under Fire For His Controversial Stance On Homosexuality 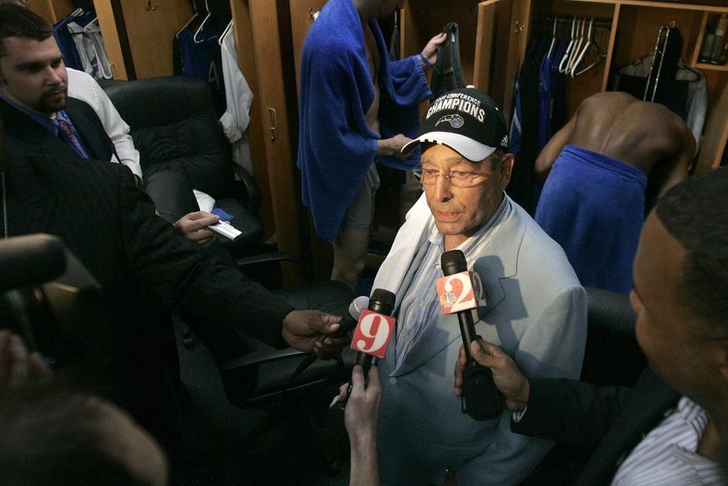 Clippers owner Donald Sterling's private comments about black people earned him a lifetime ban from the NBA...so could the public stance of another owner lead to similar consequences?

Orlando Magic owner Rich DeVos bought the team in 1991, 32 years after co-founding marketing/retail behemoth Amway. DeVos, a public advocate for both faith and traditional values, has donated millions of dollars to conservative campaigns and causes. A former finance chairman for the Republican National Committee, DeVos was a major donor to the campaigns of Rick Santorum and Newt Gingrich.

His political involvement isn't an issue - plenty of other owners have donated to campaigns all across the political spectrum - but his stance on homosexuality is starting to draw a reaction. The comments made by Sterling have led the NBA to push itself as inclusive to all faiths, colors, beliefs and creeds, and some of the things DeVos has said and done don't neatly align with that philosophy.

DeVos and his wife Helen have made significant donations to groups seeking to define marriage as the union between a man and a woman, and he has no problem defending his beliefs in public.

In 2009, MLive.com asked him why he donated $100,000 to a group committed to preventing the recognition of gay marriage in Florida. His answer:

Because I believe in it. That's just a sacred issue of respecting marriage. It was not an anti-gay thing.

I have been hung in effigy by the gay community for a long time, from when I was on President Reagan's first AIDS commission.

While on the AIDS commission, DeVos made comments saying he had no sympathy for AIDS patients because they brought their situation on themselves. Several gay rights groups have boycotted Amway ever since.

With Mark Cuban's comments that Sterling's ban created a 'slippery slope' of dangerous precedent, it'll be especially interesting to see how the NBA treats DeVos (and how DeVos treats the Sterling situation) moving forward. Conservative commentator Rush Limbaugh suggested earlier this week that DeVos was the NBA's "next target", but no players or league officials have made any statement on DeVos (or his beliefs) just yet.