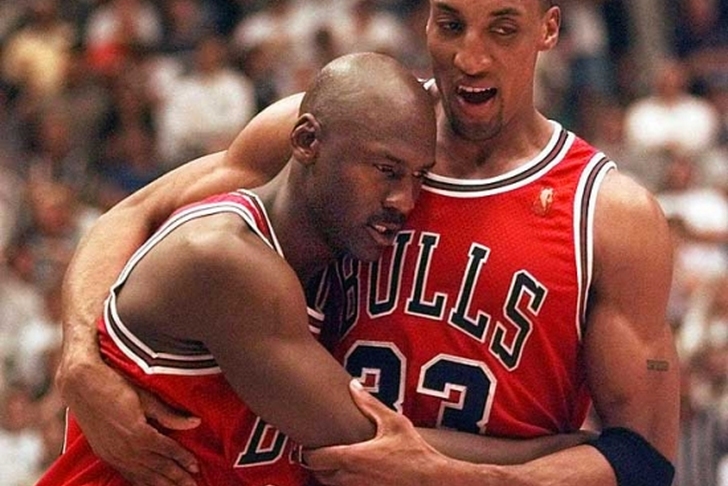 The 2013 NBA Finals tip off tonight at 9 p.m. ET in Miami, and for basketball purists it is a dream matchup. The Miami Heat are unquestionably the best team in the NBA, led by superstar LeBron James and complimented with the likes of Dwyane Wade, himself a former finals MVP. The San Antonio Spurs have been one of the dominant teams in the NBA in the last 15 years, with a never-changing group of core players, led by the "Big Three" of Tim Duncan, Tony Parker and Manu Ginobili. Chances are, we will see something special on the court over the next few weeks. But will it rival these legendary performances in NBA finals history...

In what was at the time Jordan's last season, M.J. went out on top with a legendary, Championship-winning shot with 5.6 seconds left (aided perhaps by a little push-off on Byron Russell, see for yourself). Jordan left his shooting arm hanging in the air after his follow through. While many felt Jordan was admiring what was going to be the last shot he ever took in the NBA, Jordan said it was simply because he was tired, and wanted to make sure he followed through completely to not end up short. The Bulls had a 3-1 series lead, with a chance to close out their sixth title in eight years in Game 5 in Chicago. But the Jazz held strong, forcing a Game 6 back in Salt Lake City. While the Bulls couldn't have felt too uneasy about a decisive Game 7 back at the Madhouse on Madison, Jordan ensured that would not be necessary. No. 7: Larry Bird, 1986. 29 points, 11 rebounds and 12 assists in series clincher.

In what was to be the last Celtics title for more than 20 years following an unmatched period of dominance, Bird poured in a triple-double on his way to being named Finals MVP. He was the best player on the best team in the league, and both he and the Celtics showed it in a complete victory in front of a sold-out Boston Garden.

The only non-champion to ever be named Finals MVP, West certainly earned it as he recorded 42 points, 13 rebounds and 12 assists for the Lakers in a 108-106 loss that still hurts Laker fans to this day. The home team had won every game that series, and the Lakers and their fans were prepared for a celebration at The Forum following Game 7. But the Bill Russell-led Celtics had one last bit of Irish luck left in them, winning their second straight title and 10th in 11 years, a run of dominance that will never be matched.

In what is more commonly known as the "Willis Reed Game," it was actually Walt Frazier who won the first NBA title in Knicks history. New York star Willis Reed had gone down with an injury in the Knicks' Game 5, and the Lakers smoked the Knicks by 22 points in Game 6. All inclinations were that Reed would be out for Game 7, but Reed shocked both the Lakers and the crowd at Madison Square Garden when he emerged for warmups. Many felt that the Lakers lost the game right then and there, but Frazier's dominating performance certainly helped in the Knicks' 14-point victory.

Perhaps ironic because of what's to come below, Baylor's 61 points in Game 5 remain to this day the most ever by an individual player in an NBA Finals game. Los Angeles' five-point win stunned the crowd at Boston Garden and gave the Lakers a 3-2 series lead heading back to California. But the Celtics took Game 6 to set up a legendary Game 7, detailed below.

In one of the most legendary performances in sports history, a flu-stricken Michael Jordan scored 38 points to give the Bulls a crucial Game 5 victory in Salt Lake City and send the team back to Chicago up 3-2. Jordan had been bedridden for two straight days, and arose just two hours before game time. Said Scottie Pippin on first seeing Jordan that day, "The way he looked, there's no way I thought he could even put on his uniform. I'd never seen him like that. He looked bad. I mean really bad." Nonetheless, a visibly pale and weak Jordan turned in yet another one for the record books. Two days later the Bulls won their fifth title in seven years.

With Lakers Hall-of-Fame center Kareem Abdul-Jabbar spraining his ankle midway through Los Angeles' Game 5 win over the 76ers to take a 3-2 series lead, 6' 9" rookie point guard Magic Johnson stepped into the five-spot for Game 6 in Philadelphia. He then gave what many consider to be one of the most impressive performances in NBA history, playing all five positions and finishing with a game-high in not just points, but rebounds as well. Magic was named the MVP of the Finals as the Lakers won their second title in three years. Said 76er's Hall-of-Famer Julius "The Doctor" Erving of Johnson's performance, "It was amazing. Just amazing."

The two teams - soon to be legendary rivals - had traded games throughout the series. Tied at 2-2, the Lakers stole Game 5 at Boston Garden, but the Celtics returned the favor at the L.A. Sports Arena in Game 6, setting up the winner-take-all showdown back at the Garden. Russell ensured the Lakers would not rain on Boston's parade however, pulling down an incredible 40 boards to lead the Celtics to their fourth of eight-straight NBA titles. Amazingly, the 40 rebounds match the finals record set by Russell himself two years earlier.