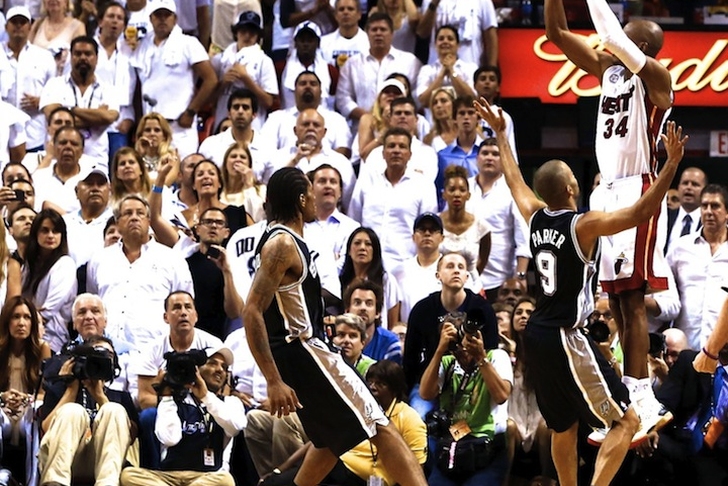 Let's do it again!

After one of the greatest NBA Finals in league history, the San Antonio Spurs and Miami Heat have their rematch - the first Finals rematch since the Bulls and Jazz in 1997 and 1998.

Last year's series gave us incredible drama, and these two sides proved (again) over the course of the regular season that they were the two best teams in their respective conferences. And don't think San Antonio doesn't still remember this like it was yesterday.

The cities are already talking trash via a not-so-great billboard fight (both of which are stupid because the Spurs get paid, too, and Miami is actually the older team), and the players have admitted they aren't the biggest fans of each other.

San Antonio will try to pack the paint to limit LeBron James' and Dwyane Wade's effectiveness and try to force the Heat to shoot from the outside. Miami will go small to try and take Tim Duncan away from the paint.

The Spurs' chances to win this series may hinge on the health of Tony Parker's sprained ankle. It held him out of the second half of Game 6 of their series-clinching win over Oklahoma City, but has been cleared to start Game 1. Whether or not the injury will have any lingering effects remains to be seen.

Because of course they did.

Of all the people in the world who try to guard LeBron James, Leonard did the best job out of anyone during last year's Finals. LeBron still managed to get his numbers, but Kawhi forced him into more jumpers and made him work harder for his points.

He's going to have to perform that well - or better - on the defensive end for the Spurs to have a chance, but he's also going to have to repeat his offensive performance. He averaged 14.6 points per game in the Finals last year (which was up from 11.9 ppg during that season), and he had his two biggest games when San Antonio needed it the most - 22 points in Game 6, 19 in Game 7.

Even if Tony Parker's injury limits him in this series, Kawhi is still more important to the Spurs' chances in this series because of their need for his two-way play. Many people expected a breakout year from Kawhi after his Finals performance, but instead we got more of the same. San Antonio needs him to step his game up again for them to beat Miami.

San Antonio wins IF: They pack the paint effectively - as has been their strategy against LeBron - and Tony Parker's health doesn't become that big of a concern.

Miami wins IF: Their role players hit a ton of threes and LeBron & D-Wade are able to effectively penetrate San Antonio's defense.

Last year was an absolute toss-up, but this year figures to be slightly less so.

San Antonio had the series all but won (twice!) last season, but let the championship slip through their hands via one of the all-time greatest comebacks by Miami.

It'll still be a long series, but the Spurs have gotten better - and are looking for revenge - while the Heat haven't looked as strong in these playoffs.

Who do you think will win? How will player legacies be affected? Tweet your thoughts to @brauf33.