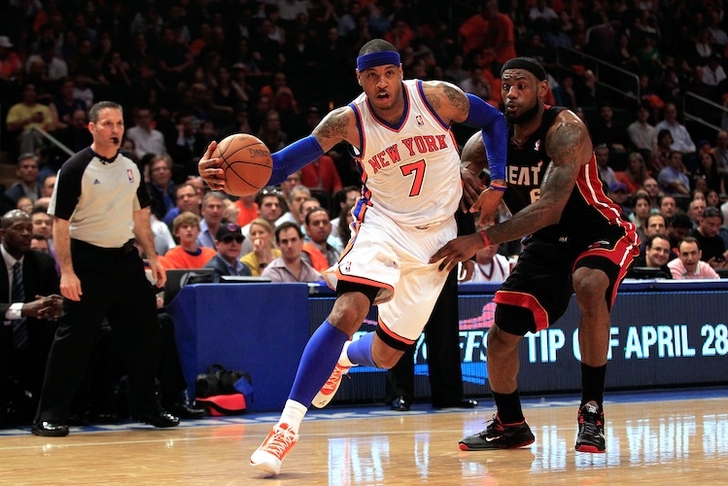 Free agency is already going strong, with teams pitching themselves to players and players jockeying for the best possible deals. With all the rumors and speculation flying around about players like LeBron James and Carmelo Anthony, it can be hard to tell what's really going on - that's why we're here to sift through the rumor mill and break down the most likely outcomes for the top 5 players in free agency.

LeBron exercised his early termination option, putting a number of interested teams on red alert. Despite all the outside interest, LeBron is a virtual lock to stay in Miami - in public and in private, James has made it clear that he'd only consider leaving if the Heat front office is unable to upgrade the team that lost the 2013-14 NBA Finals.

LeBron hasn't forgotten the PR beating he took after The Decision, and he cares about his public persona too much to put himself through that again.

Anthony made it clear that he's interested in playing the field - he had plenty of good reasons to be unhappy with the Knicks, and now he wants to put himself in the best position to win a ring. Unlike the "race" for LeBron, several teams have a real shot at Carmelo - he's visiting the Bulls, Rockets, Mavs and Lakers, and his wife is still hoping he stays in New York.

While a lot depends on the impression these teams can make on Anthony in meetings, the Bulls are still leading the race - they're in the less-crowded Eastern Conference, they have a roster built to contend, and they play in one of the nation's largest media markets.

Bosh, like James, exercised his early termination option, leading to way more speculation than was necessary or helpful. Bosh is also highly likely to stay in Miami, but unlike James, he sounded pretty bummed out at the end of the 2013-14 season.

Despite Bosh's complaints and reported interest from Toronto and the Lakers, re-signing in Miami looks like by far the most likely outcome.

Bledsoe, a restricted free agent, is still flying under the free agency radar...and the teams chasing him are hoping it stays that way. The LA Lakers would love to bring him in, and there are whispers that the Mavs and Raptors (who both have starting point guards who could be on the move - Devin Harris and Kyle Lowry, respectively) have targeted Bledsoe as a replacement, if they end up needing one.

The Suns, meanwhile, are going to do whatever they can to keep Bledsoe in Phoenix. A good friend of LeBron James, Bledsoe is seen as a key component of the Suns' ambitious plan to lure multiple marquee names to the desert this summer. While bringing in LeBron and Carmelo is still an extreme longshot, the Suns are expected to match any offers made for Bledsoe.

We had Dwyane Wade in the #5 spot, but like LeBron and Bosh, he's almost definitely staying in Miami, and reading that same story again would be pretty boring.

Despite recent reports that Lowry was definitely staying in Toronto, he's still being treated like an attainable player by several teams - most notably Miami and the LA Lakers (with just five players under contract for 2014, the Lakers will be in play for almost every major free agent). Toronto is in a delicate cap situation thanks to years of mismanagement by Bryan Colangelo, but they're outwardly bullish about keeping Lowry around (their massive confidence is reportedly what led to the false reports that he was off the market).

Are the Raptors bluffing? We'll find out shortly, but the latest rumor says they're prepared to match offers up to $13.5 million per year...which is more than any sane team would bid for a good-but-not-great point guard with a reputation for being hard to work with.