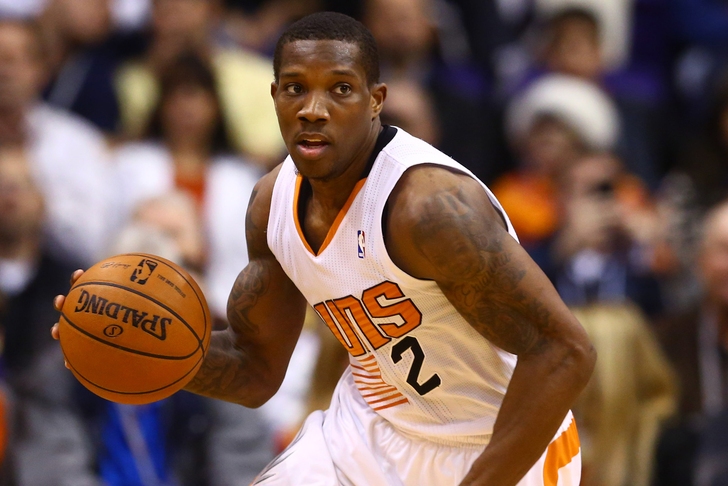 With LeBron James heading home, the dominoes have begun to fall in earnest. After James announced his intent to return to Cleveland on Friday in an exclusive essay published on SI.com, Carmelo Anthony announced he'd be going back to New York on a five-year contract. Things have only gotten crazier from there (Gasol to Chicago! Ariza to Houston! Deng to Miami! Parsons to Dallas! Stephenson to Charlotte!), so stay tuned for all the latest moves and speculation surrounding the 2014 NBA free agency period. With Carmelo Anthony signed, Bledsoe, a restricted free agent, will no longer be flying under the radar...a development which might force the Suns into action.

Although several teams have registered interest, Phoenix has done their part to make sure other front offices know how highly they prize Bledsoe. The Suns are reportedly willing to match any offers for the high-potential point guard, which has scared off any potential suitors up to this point.

Monroe is a restricted free agent in Detroit, but the league-wide shortage of available big men has quite a few teams interested. Monroe has denied reports of friction with teammate Josh Smith, but the rumors won't go away...and they've encouraged several teams to reach out to his agent.

Pistons GM/HC Stan Van Gundy now says he's "nervous" about what Monroe and his agent are doing - the two are quietly fielding offers, and the Pistons have largely been kept out of the loop.

The Pistons would love to keep Monroe, but they still aren't sure if he wants to come back. Portland was initially the team making the biggest push for Monroe, but Miami and Houston have raced to the front of the pack.

Houston missed out on Chris Bosh, but still wants an upgrade at the PF position that they can pair with Dwight Howard. The Heat are also looking for talented players to fill the void left by LeBron's departure, and they've quickly turned their attention to Monroe.

We can see several teams making offers for Monroe in the very near future, but Houston - which lost out on Bosh, then lost Chandler Parsons to Dallas almost immediately after - has the most pressing need.

Turner's stock has dropped dramatically after a disappointing final three months with the Indiana Pacers in 2013-14. The 25-year old swingman looked completely out of place after being traded from Philadelphia, watching his playing time dwindle to the point where he played just four minutes during Indiana's Eastern Conference Finals series against the Miami Heat. The Pacers, unsurprisingly, declined to extend him an $8.7 million qualifying offer, making him an unrestricted free agent.

The #2 overall pick in the 2010 NBA Draft is still young, and could be an intriguing low-risk addition on a one-year contract. Per Darren Wolfson of 1500 ESPN, the Minnesota Timberwolves are interested in him for that exact reason, with the Cleveland Cavs also in the mix.

The 15-year veteran might not be the offensive force he used to be during his days with the run-and-gun Phoenix Suns, but his defensive presence alone makes him a prime pickup for many contenders looking for a shutdown force in the frontcourt.

Don't sleep on his scoring ability, however. 2013-14 marked the 15th straight year that Marion has averaged double-digit points per game (10.4), making him enough of a dual threat to be coveted by both pretenders and contenders alike.

The Verdict: Dallas (despite reports to the contrary)

The veteran point guard's leadership was so valued during his time in Orlando, that the team's brass waived Nelson (and paid him $2 million) this offseason rather than dangle him in trades as an expiring contract. Nelson's $8 million deal didn't make sense for the Magic during their current rebuilding process, but Nelson's skill set still makes him an intriguing fit for several other NBA teams looking for backcourt help.

Nelson averaged 12.1 points and 7.0 assists per game in 2013-14 while shooting 39.4% from the field and 34.8% from downtown. Several teams have expressed initial interest in the 10-year veteran, but look for a young up-and-coming team to covet Nelson for the stabilizing force he can provide in the locker room.

The 28-year-old guard appeared in 55 games for the Hornets last year, averaging 12.3 points and 4.1 assists per game. He was then traded to Milwaukee, where he showed flashes of game-changing ability - upping his totals to 15.8 points and 4.4 assists per game in 22 contests.

Per Alex Kennedy of Basketball Insiders, the Charlotte Hornets have expressed interest in bringing Sessions back, with the Chicago Bulls also throwing their name out there as a potential landing spot. He's not much of a shooter (as evidenced by his 28.1% mark from downtown in 2013-14), but his ability as a slash-and-kick guard ups his value.

In the end, expect Chicago to pull away and bolster their backcourt depth.

After 18 seasons in the league, the ageless sharpshooter is considering retirement. No one would begrudge the ten-time NBA All-Star if he decides to hang it up, but Allen doesn't seem to be in an immediate hurry to tip his hand one way or the other.

Allen averaged under 10 points per game (9.6) for the first time in his career in 2013-14, but that had more to do with a reduced amount of looks (career-low 7.4 field goal attempts per game) than anything else. He can still go even at 38-years-old, and the Miami Heat and Cleveland Cavs would love to have him if he decides to give it one more run.

The Verdict: Cleveland by the slimmest of margins

O'Neal is currently contemplating retirement, which is no surprise when you consider the variety of leg injuries and ailments that the 18-year NBA veteran has battled over his entire career.

However, the 35-year-old experienced a late-career renaissance with the Warriors in 2013-14, providing emotional leadership and physicality when he was able to get on the floor. After Andrew Bogut went down for the NBA Playoffs, O'Neal appeared in all seven of Golden State's games against the Clippers to limited effect - looking worn down at certain points of the series.

No one would fault O'Neal if he called it a day, but his reticence to make an announcement and continued contact with new Warriors head coach Steve Kerr could mean one more year for the consummate veteran.

The Verdict: Golden State with retirement a close second

After suffering a serious neck injury with the Washington Wizards, Washington shipped Okafor and their 2014 first-round pick to the Phoenix Suns for new mainstay Marcin Gortat.

The 31-year-old center missed the entire 2013-14 season, staying on the roster as an expired contract the Suns could use during this free agency period. If Okafor can come back healthy, his rebounding skills and defensive prowess could be a welcome addition to several teams.

Look for Cleveland to make an overture to Okafor if they can't get something done with Chris "Birdman" Andersen. Otherwise, Miami could step up their pursuit with the potential losses of both Andersen and Greg Oden.

One Williams leaves our board, and another one takes his place.

The 31-year-old combo guard posted his worst scoring average since his rookie season (2003-04 with Utah) in 2013-14, averaging 9.7 points per game in 74 regular-season games with the Portland Trail Blazers.

After declining a $2.77 million player option to return to the Blazers, the market for the 11-year NBA veteran took a turn over the weekend with reports of mutual interest between Williams and the Mavs. Miami and San Antonio are also said to be lurking, with Portland also still in the market for a backup point guard.

A below-average defender who isn't willing to slash into the paint and create like he used to, the undersized shooting guard could find himself the odd man out in Boston with Marcus Smart's arrival.

Bayless will most likely land with a team on the veteran's minimum, as the six-year pro still showed explosive bursts with the C's in 2013-14. Coach Brad Stevens has expressed a desire for Bayless to return, but president of basketball operations Danny Ainge has been reluctant to comment.

Miami and Utah are intriguing fits, with Miami's reported interest and current aggressive free agency strategy making them the favorite.

After being effectively suspended by the Brooklyn Nets this past December "out of concerns over his conditioning and preparedness," per Grantland's Zach Lowe, the free agent big man saw himself fall out of favor in the eyes of Nets management. Consequently, the Nets seem uninterested in facilitating a return.

Blatche's 11.2 points and 5.3 rebounds per game in 2013-14 make him a potential steal if he can get his head straight. The Toronto Raptors have already met with Blatche, giving them the potential inside track on bringing him in on the cheap.

The 23-year-old Hamilton is still developing as a frontcourt presence, using innate confidence and aggression to mask some of his deficiencies as a shooter and a passer.

With good size and a relatively-high ceiling when it comes to his defensive ability, the former Denver Nugget and Houston Rocket should catch on somewhere on a minimum salary. Look at teams like the Lakers or Heat as a potential fit when it comes to looking for a cost-effecting project on the wing.

It's been an impressive fifteen years for Brand as a force in the post, despite a noted drop-off in production for the 35-year-old big man during his last two one-year stops in Dallas and Atlanta. Brand saw his minutes drop to a career-low 19.4 per game with the Hawks last season, but still averaged close to a double-double per 36 minutes played (10.7 PPG, 9.2 RPG).

The Hawks and Knicks have both expressed in bringing Brand back on his farewell tour, with a return to Atlanta on a manageable one-year deal the most likely scenario.

Crawford's reputation as a shoot-first, ask questions later guard has dropped his stock considerably on the open market this offseason. The Warriors are attempting to do their part by facilitating a sign-and-trade for 25-year-old volume shooter, but nothing has come out of it as of yet.

Crawford has averaged 11 points or more in his first four NBA seasons, but is shooting just 40.5% from the field and 30.6% from downtown in order to do so. Keep an eye on teams like the Lakers and Knicks who are looking for secondary scoring, along with the Pacers as an end of the bench option behind Rodney Stuckey and CJ Miles.

Make sure to download the free Chat Sports app for all the latest free agency news & rumors!