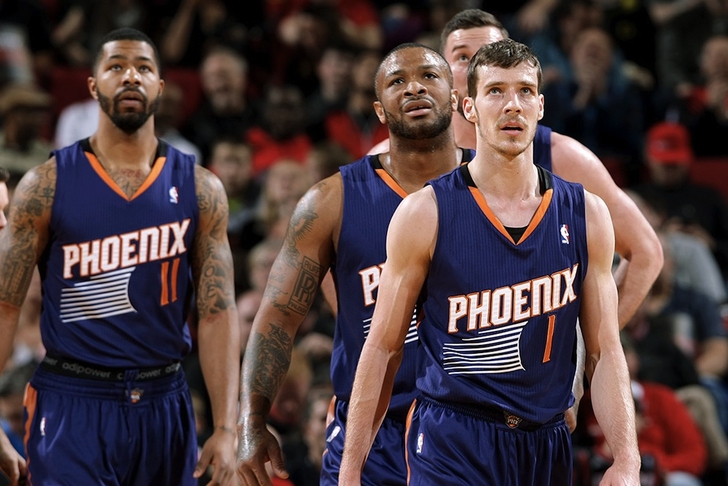 Phoenix was one of the teams everyone thought was in full-on tank mode before the season started, but they ended up being one of the year's biggest surprises and best feel-good stories.

First year head coach Jeff Hornacek inherited a roster that didn't appear to have much talent, but so many players showed massive improvement and the team played so well together that they came thisclose to making the playoffs in a loaded Western Conference.

The future in the desert looks bright with almost all key players returning (or going to return), along three-first round draft picks. There is a lot of talk about the Suns trading some or all of those picks to try and land an available superstar (aka Kevin Love) to push this team to the next level.

But with a draft class this loaded, it wouldn't be a bad move for Phoenix to keep their selections.

There are two directions the Suns can go here. They need to get more physical down low and can probably find a better replacement for Channing Frye (who's a free agent), or they can add a small forward that's probably a better replacement for P.J. Tucker (also a free agent). I think Phoenix will let those guys walk to sign cheaper, more talented players in this first round - if they keep their picks.

Power forward isn't as deep as small forward in this draft, so look for them to take Adreian Payne from Michigan State here. He's a team-first guy (important in Phoenix) that is tough in the paint but can also stretch the defense from the perimeter. They will also look at center Jusuf Nurkic from Bosnia, who's a true center and would provide insurance for last year's first round pick, Alex Len, who missed most of 2013-14 with injuries.

The Suns will go for a small forward here, and they have a couple of options. Either Rodney Hood or T.J. Warren should be available here, but Warren is the most likely candidate. He's a pure scorer who's not great an anything but really good at everything, and that makes him harder to stop. Warren is another team-first guy that won't do anything to rock the boat or mess with the Suns' chemistry.

If both of those guys are gone, they might stretch and go with Clemson's K.J. McDaniels who's a jack-of-all-trades and an elite defender.

At this point the Suns will go with the best player left on the board as long as it's not a point guard since they have Goran Dragic and Eric Bledsoe. Glenn Robinson III could be an insurance pick to add more small forward depth, and they also like shooting guard Jordan Adams from UCLA.

Phoenix will look for size with this pick, hoping to get another body off the bench that can bang in the post. Dwight Powell from Stanford fits that description to a tee - plus he's someone who does all of the little things winning basketball teams need. Cory Jefferson of Baylor is another good option, plus he has range to stretch a defense.

Who should the Suns pick? Will they break through and make the playoffs this year? Tweet your thoughts to @brauf33.