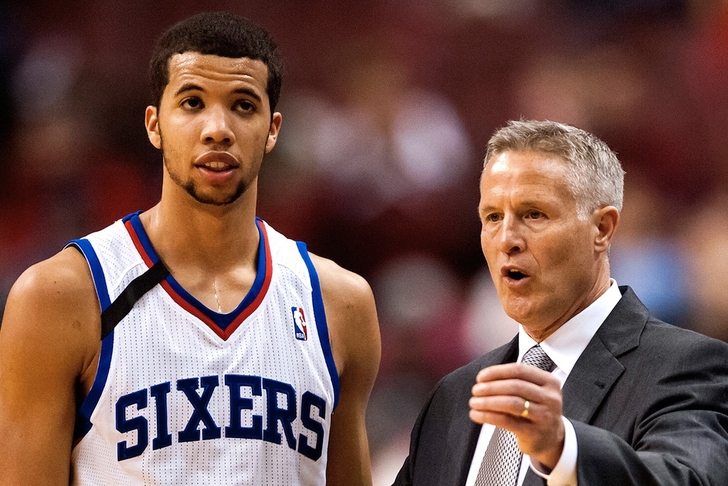 Philadelphia took tanking to a whole new level this year.

They traded away their best player, Jrue Holiday, for the No. 6 pick in the draft, Nerlens Noel. This wasn't bad, considering Noel was a frontrunner for the top spot, but he had a torn ACL. Philly essentially told him not to worry and not rush his recovery, and didn't play him for the entire season.

That decision - among many other smaller roster moves, including trading away their next best player, Evan Turner - gave us a team that lost 26 games in a row, tying an NBA record.

The lone bright spot was 11th overall pick Michael Carter-Williams, who won Rookie of the Year, averaging 16.7 points, 6.3 assists, and 6.2 rebounds per game as a point guard. Forward Thaddeus Young joins Carter-Williams as the only real viable NBA players on this team that saw action last season, but management has said even they aren't safe from being traded if they're not in the franchise's long-term plans.

The Sixers do have a ton of draft picks - seven, to be exact, - to help bolster that roster.

Picking third has its benefits when there are three players that appear to be a cut above everyone else. They'll gladly be the last of the three, which looks like it'll be Jabari Parker. He'd fill a need on the wing in the small forward spot and is the most NBA-ready player in this draft - something the Sixers definitely need.

Reports have also indicated that Australian point guard Dante Exum might be in play here. Philadelphia's front office loves him, but don't think he can play with Carter-Williams - hence, the MCW trade rumors.

The Philadelphia 76ers are Exum fans as well and if Wiggins is off the board, he's in the mix. They think Exum and Carter-Williams could play together in the backcourt, though it would not be a very good shooting tandem. I think the more obvious fit comes if they trade Carter-Williams, an idea I'm told they have bounced around. - Chad Ford, ESPN

However, they'd only make that move if they get a good enough package for Carter-Williams, which would likely include a top-10 pick. The Lakers and the Kings would be candidates there, but it's unlikely they'll give up what the Sixers would want.

Where they go with this pick will largely be determined by who they take at No. 3. If they take Parker, that leaves shooting guard as their biggest need, making Michigan State's Gary Harris a great selection here. He's a good defensive player that doesn't need to be a focal part of the offense to make an impact because of his shooting ability. Harris is also good when he's aggressive and drives to the rim.

They could also go in the direction of Dario Saric, a tall forward from Croatia who can drill it from deep - think of him as this year's version of the fabled-but-never-found "Next Dirk Nowitzki".

With five picks in the second round, the Sixers have the ability to take chances on guys who might be a bit risky. In saying that, they're still looking for guys who can have good careers in the NBA, because they need more of those guys on their roster.

Glenn Robinson III from Michigan would be a nice addition and add some depth to their thin small forward position, but he also has the athleticism to play shooting guard in bigger lineups. Jarnell Stokes from Tennessee is also a good option if they want to choose a big man.

This spot is where Philly is more likely to take a bigger risk on someone with talent, and that guy should be Jordan Clarkson from Missouri. He averaged 17.5 ppg for the Tigers and can play some backup minutes in either guard position. Jahii Carson from Arizona State is also someone to keep an eye on here. Carson can provide a Nate Robinson-like spark in the backup point guard role and give the Sixers a different look when he's in the game.

Now is when Philly should start looking for more sure things than risky prospects - guys that you know can make an impact off the bench. Patric Young from Florida fits that mold, and his strength down low would be a nice complement to the slender Nerlens Noel. Cory Jefferson from Baylor also fits that mold of a strong big man, but he's not the presence Young is - although he does have the ability to shoot the long ball, something Young does not have.

At this point it's slim pickings, and you gotta take what you can get. Dwight Powell from Stanford would be another physical presence down low, but he's a more skilled offensive player than the other two in the post. Devyn Marble, who led Iowa to their first NCAA Tournament since 2006, is a smart guard that could become a niche player.

Khem Birch from UNLV was one of the more efficient players in the country last year (26.7 Player Efficiency Rating) playing both power forward and center. Markel Brown from Oklahoma State might also be worth the risk at this point, as he is one of the most talented guys that are expected to go late in the second round.

Who should Philadelphia pick? How long will it take for their young core to become contenders? Will they even get there? Tweet your thoughts to @brauf33.