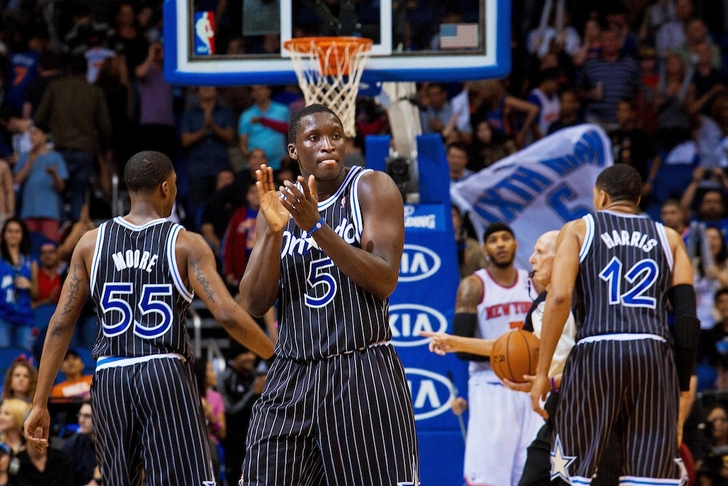 Orlando has been in full-on rebuilding mode since trading Dwight Howard to the Lakers, but the team showed some promise last season.

Center Nikola Vucevic has turned into an above average center in his third year in the league, and forward Tobias Harris has also shown promise. Last year's second overall pick Victor Oladipo proved to be a good defender and a capable offensive option on his way to First Team All-Rookie honors.

However, the Oladipo-at-point-guard experiment didn't quite work out, and the Magic need to get deeper all over their roster in order to return to the playoffs.

Orlando's moving in the right direction, but this draft could streamline their progress back to being a contender, or it could set them back a few more years. They only have two picks, but both are in the top 12 - giving them two great opportunities to land long-term starters.

If Dante Exum is still on the board, this would be a match made in basketball heaven. He's a 6'6" point guard that is equally great as a distributor and scorer (the Magic need scoring in the worst way), and he would be the perfect compliment to Oladipo in the backcourt.

But the Sixers, who pick third, are also big Exum fans. Unfortunately for them, he doesn't fit well with Michael Carter-Williams, Philly's current point guard who won Rookie of the Year, as they're both attacking point guards that struggle shooting the ball.

If Philadelphia can find a trade partner for MCW, they'll take Exum, which would leave Jabari Parker for Orlando - not a bad consolation prize.

The Magic have holes at both point guard and small forward, so either guy would fill a need and be able to contribute heavy minutes right away.

The direction Orlando goes here will be determined by who falls to them at No. 4. Assuming they take Exum, they'll likely take a small forward. 6'10" Dario Saric from Croatia would be a great fit because of his potential and ability to play either forward position. He would've been a top-5 pick in last year's draft, and there are rumors that he only entered the draft this year because the Lakers and Celtics have lottery picks, as those are the two teams he wants to play for.

If he refuses to play for anyone but LA or Boston, or is off the board at this point, James Young from Kentucky would be the smart choice. He's 6'7" with a smooth jumper - giving Orlando much needed outside shooting - and can get to the rim with ease.

If Parker falls to them at No. 4, this is where they will address their point guard need. The smooth-operating Tyler Ennis from Syracuse would be the choice in that scenario, assuming Marcus Smart doesn't fall this far.

Who should Orlando pick? How long before the Magic become contenders again? Tweet your thoughts to @brauf33.