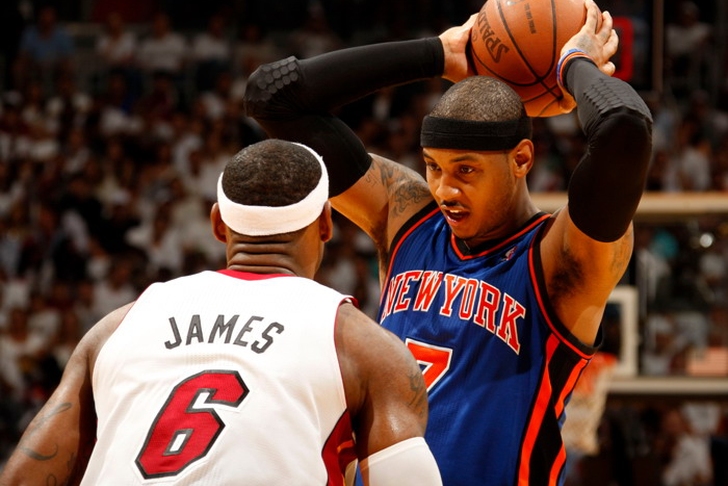 As of Thursday, NBA free agents can officially sign on with new teams...and the rumors are flying fast and furious. LeBron James, Carmelo Anthony and a number of other high-profile free agents are yet to officially decide their future, so we've put together this compilation of the latest rumors swirling around the league's best available players.

- According to Sam Amico of Fox Sports Ohio, police were told to prepare for a 3:30 announcement on LeBron's future. Obviously, that didn't happen. (Sam Amico, Fox Sports Ohio)

- Chris Sheridan is still all-in on his claim that LeBron has decided to return to Cleveland. His latest update claims LeBron delivered the news to Pat Riley during Wednesday's meeting, and Riley tried and failed to change his mind. It's important to note that reports from ESPN, Yahoo! Sports, Turner/Bleacher Report and more directly contradict this information.

- LeBron has no meetings set with any teams/front offices set at this time. (Brian Windhorst, ESPN)

- James will not travel to Akron, instead flying directly from his Las Vegas basketball camp to Rio de Janeiro for the World Cup Final. (Jason Lloyd, Akron Beacon-Journal)

- A player close to LeBron laughed at the notion that Miami's free agency moves so far would impress James. (Bleacher Report's Ethan Skolnick)

- Last week, James reached out to Mike Miller and a still-unidentified veteran free agent about joining him IF he left Miami. (Yahoo! Sports' Adrian Wojnarowski)

- Carmelo has reportedly told a friend "I believe in Phil", and is now expected to return to New York regardless of LeBron's decision. (Frank Isola, NY Daily News)

- Stephen A. Smith says the Bulls and Lakers are still in the mix, although his information seems speculative at best - he cites Melo's wife La La Anthony and her entertainment career as his motivation to go to LA, while previous reports have unanimously said she's trying to keep him in New York. (Stephen A. Smith on ESPN Radio)

- Kevin Durant has worked out with Anthony in Los Angeles, and is pushing him towards working with Derek Fisher (Durant's recent teammate) in New York. (Yahoo! Sports' Adrian Wojnarowski)

- Any moves for Love are on hold until LeBron and Carmelo Anthony know where they're going. (Chat Sports)

- Despite earlier reports, the Cleveland Cavaliers do not have a trade for Love lined up. (Sporting News' Sean Deveney)

- Boston and Cleveland have been the two most active teams chasing Love this week, but the Golden State Warriors are still in the hunt. (Boston Globe's Baxter Holmes, Chat Sports)

- The Warriors are still holding out on including Klay Thompson in any deal for Love - the salary numbers would be tight, but Golden State is confident they can make it work. (Tim Kawakami, San Jose Mercury News)

- Former Sacramento Kings guard Isaiah Thomas is visiting the Phoenix Suns on Friday - the Suns would work him into the lineup as a third guard behind Goran Dragic and Eric Bledsoe (Paul Coro, AZCentral Sports)

- Paul Pierce has been in touch with Clippers coach Doc Rivers, and says 'dominoes will fall' when LeBron and Carmelo know where they're going (Mike Mazzeo, ESPN)

- Andrew Wiggins' shoe deal with Adidas is the largest ever given to a rookie, and could pay him at least $2 million annually (ESPN)