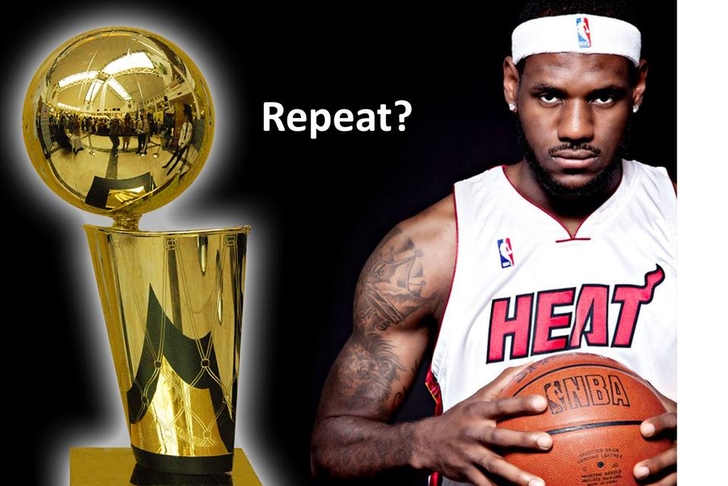 Chat Sports will be live-blogging our observations and quips from Game 1 of the NBA Finals tonight. Check back here for your second-half updates from Chat Sports HQ.

Update 8:36 p.m. PT: Twitter believes that was some "Harlem Globetrotter Sh*t" from Tony Parker. About right.

Update 8:34 p.m. PT: So, so close to a shot clock violation. But there really isn't enough to overturn. It's crazy how one frame of who-know-how-many frames per second video makes the difference.

Update 8:33 p.m. PT: Tony Parker fell to the ground, kept his dribble, got around LeBron and then banked in a leaner. Spurs up by four with six ticks left.

Update 8:25 p.m. PT: Of the myriad of things you should not ever do in an NBA game, fouling Ray Allen shooting a three pointer is way, way, way, up there.

Update 8:16 p.m. PT: Honestly if there are two teams in the league where home court advantage pretty much doesn't matter at all, it's these. Not at all a knock on the fans, just a testament to the demeanor of the teams and players.

Update 8:12 p.m. PT: Wade and LeBron try to play the two-man game, but James turns it over to Parker, who finishes with an impressive spin move around LeBron at the other end. Timeout Heat with the Spurs up 81-78. Six minutes to go.

Update 8:02 p.m. PT: LeBron and Wade on the bench, as are Ginobili and Duncan for the Spurs. Pop takes a full time out to talk things over as the Heat lead by three with nine minutes to go.

Update 7:39 p.m. PT: By the way, the Public Address announcer in Miami is supremely annoying. But then again, so are most all NBA P.A. guys.

Update 7:37 p.m. PT: And now a quick 6-0 Spurs run makes it a one-point game. Spoelstra uses T.O. to squash it. Although if there's any team that would have no effect on whatsoever, it would be the Spurs.

Update 7:36 p.m. PT: In case you haven't noticed, Dwyane Wade has more points than LeBron. Clearly something is wrong with the world. Heat up barely.

Update 7:31 p.m. PT: Second half underway in Miami everyone.

Here's what we've got from the first half:

with the second-quarter buzzer beater. It's 52-49 Heat at halftime. Great first half, shaping up for a great 2nd.

Update 7:07 p.m. PT: This is a crazy quick game. Kudos to the refs for letting them play, but also quite simply the two best teams in the game. Good, flowing hoops.

Update 6:54 p.m. PT: In case you haven't heard, basketball is a game of runs. Heat take a nine-point lead, but just like that it's back down to two.

Update 6:47 p.m. PT: Heat fans getting into it with some soccer-like chanting. Could be because Sergio Ramos is there.

Update 6:45 p.m. PT: There is an NBA Finals game going on, but it's sort of easy to forget with the efficiency these two teams play with. Just great hoops.

Here's from the first quarter:

Update 6:34 p.m. PT: End of the first quarter. Miami 24, San Antonio 23. Nothing much to say. Some nice play, some sloppy play. But more nice than not, it is the two most deserving teams in the league.

Update 6:30 p.m. PT: And as I post that, Tim Duncan whistled for going straight up on LeBron. Never mind.

Update 6:29 p.m. PT: Referees letting the boys play tonight it looks like, always gotta like that. Unless you're a whining NBA player, as most are.

Update 6:21 p.m. PT: By the way your officials tonight: #13 Monty McCutchen, #25 Tony Brothers and #23 Jason Phillips. Judge for yourselves.

Update 6:17 p.m. PT: ABC interviewing former NBA ref Steve Javie, because lord knows we might end up talking about the refs more than the game itself. No Joey Crawford tonight though...

Update 6:10 p.m. PT: Spurs on a 9-0 run to take a 9-2 lead. Erik Spoelstra with a quick time out. Or is that Thunder coach Scott Brooks? No one would ever know the difference.

Update 6:07 p.m. PT: The Spurs win the opening tip, which obviously means everything.

Update 6:01 p.m. PT: Is the Biebs there? Look at the picture below. If he's not there, and dressed like that, it doesn't count.

Update 5:55 p.m. PT: ABC just showed a closeup on Gregg Popovich. If there's one thing that's guaranteed to be more exciting than this game, it's Pop's mid-game interview. Two questions, five total words for his answers. And that's being generous.