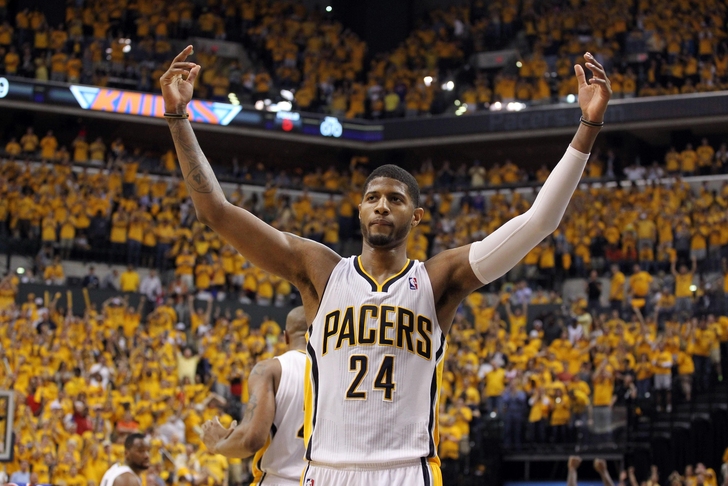 The Wizards are competitive this season and John Wall is the primary reason. Not only is he one of the league's best point guards, but he’s taking a Wizards team accustomed to losing and leading them back to relevancy with his stellar play. Wall leads the Eastern Conference with 8.6 assists per game, while scoring nearly 20 per contest. Additionally, Wall leads Eastern Conference point guards in double-doubles with 12.

The world continues to assert that D-Wade’s game has regressed. While he definitely isn’t the athletic specimen he was back in 2006, Wade is still a premier 2-guard in the NBA.  The three-time champion is averaging 19 points per game, but is still capable of dropping 25-30 points if the Heat needs it on any given night. Wade is also quietly having the most efficient season of his career.

We all knew Paul George had the talent to be a top-5 NBA player, but most didn’t see him playing this well in his 4th season. PG24 has been spectacular while leading the Pacers to a 31-7 start, good for the best record in the league. George is averaging nearly 23 points per game while shooting 38 percent from downtown.

George has quickly become one of the league's best two-way swingmen, and his ability to dominate on both sides of the ball puts him in elite company. If I had to pick the one player most deserving of an all-star selection for the East, it would be hard to pick anyone other than Paul George...except maybe our next guy.

What is there to say that hasn’t already been said about LeBron James. LBJ is having the most efficient season of his career, averaging nearly 26 points per game while shooting 58 percent from the field. James is also second in the league in PER at 29.12.

Roy Hibbert deserves to be an all-star starter because of his importance to the NBA’s best team. He is the defensive anchor for the NBA’s best defense. No one in the league holds opponents to a lower field goal percentage, and Hibbert is second in the NBA with 2.6 blocks per game.

Kyrie Irving is the leader of a 14-25 Cavs team that's certainly underachieved so far this season. Irving has been inconsistent, but when he’s on, he's one of the most dynamic guards in the league.

With little point guard depth in the East due to injuries to Derrick Rose and Rajon Rondo, Irving is lock to make the team.

Lance Stephenson’s ascension as a quality NBA player has certainly been entertaining to watch. Stephenson is a player who plays with reckless emotion and passion, and he also happens to lead the league in triple-doubles with 3.  Born Ready’s stats don’t jump off the stat sheet (13 ppg, 5 apg, 6 rpg), but if you watch the Pacers play you see how important he is to the league's best team.

I've always been critical of Melo’s game in the past. During his stint in Denver, Melo was a lazy defender and a one-dimensional scorer who failed to make those around him better. Since becoming a Knick, Melo has matured, and so has his game. While he isn't a great defender, he can hold his own against some players and his effort has improved dramatically.

Statistically, Anthony is having a career year, averaging 26 points and nearly 9 boards per game while posting an impressive PER of 23.48.

The reason Carmelo isn’t pegged as a starter is his team’s disappointing 15-24 record, good for 10th in the East.

Could this be the year Big Al finally makes an all-star roster?

Jefferson has proven to be a great find for the improving Bobcats. Since joining the Cats during the offseason, Jefferson has become the team leader thanks to his presence and consistent play. The big man is good for 17 points and nearly 10 boards a night while posting a PER of 20.21. It’s time for Jefferson to get some recognition.

Aside from his awful free throw shooting (37 percent), Andre Drummond's play is deserving of a reserve all-star roster spot. He averages a double-double (12 ppg & 12 rpg) and is continuing to become a dominant defensive center.

Paul Millsap is quietly playing all-star caliber basketball for the Atlanta Hawks. Once Al Horford went down, Millsap took more of the burden and has done a great job. The Hawks don’t have a lot of talent of on the roster, but still hold the 4-seed in the weak Eastern Conference. Millsap’s 17 points and 8 boards per game have a lot to do with Atlanta's success.

Thaddeus Young plays on a tanktastic Sixers team clearly not aiming for wins this season in an effort to get a lottery pick in 2014. Young has played very solid ball for the Sixers this season despite their struggles, and he's shooting nearly 50 percent from the field and 39 percent from beyond the arc. Young is averaging 17 points and 8 rebounds per game as well, and should get a reserve spot despite his team's record.

After being snubbed in last season’s all-star game, Steph Curry did what any great player would do - come back even better than before, and force the basketball world to respect his game.

Curry has been the second-best point guard in the league this season, posting career-highs in almost every statistical category. Curry is leading the Warriors as they transform into genuine contenders for the championship, scoring 23 points and dishing out 9 assists per game.

Paul is currently out with a shoulder injury that could sideline him for the next few weeks, but his play before his injury was so impressive that he still deserves this spot. CP3 is the premier point guard in the NBA this season, with Stephen Curry and John Wall a distant second and third.

What can’t KD do? He's the league’s best scorer, averaging 30 points, while also posting career-highs in rebounds (8) and assists (5).

LaMarcus Alridge went from an underrated all-star last season to a legitimate MVP candidate this year. The Blazers have been a surprise contender in the West, and LA’s dominance has been the key.

Alridge is posting career-highs in scoring (23.8 ppg) and rebounds (11.2). He deserves an all-star spot as a starter, but it’s highly unlikely he’ll get this spot as long as Blake Griffin is still posterizing players on a weekly basis.

D12 is the best overall center in the West on a Rockets team that's improving every day. While Dwight Howard isn’t the dominant player he was in Orlando, he doesn’t have to be due to the quality players on Houston’s roster. His defense is still elite and he creates more opportunities for wing players like Jeremy Lin, Chandler Parsons and James Harden.

Howard is averaging 18 points and 12 boards per contest.

Damian Lillard has quickly become one of the better point guards in the NBA in his second season. With Russell Westbrook’s knee injury, this spot on the all-star roster is wide open, and Lillard is worthy of the all-star nod.

Lillard leads the league in 3-pointers made and is draining 44 percent of them. His 21 points and 5 assists per game help carry the load for the Trailblazers.

Although Harden’s defense needs work, no one plays defense in all-star games anyway. The Beard averages 24 points, 5 assists and 5 rebounds per game. He’s dynamic and crafty, which is what fans love about him.

The Rockets are currently the 5th best team in the rugged Western Conference, and still continuing to improve. Harden is the main reason for Houston's resurgence.

If the Wolves were a winning team, Kevin Love would get much more recognition for his routinely superb play. Love’s PER is third-best in the NBA after Durant and LeBron James at 27.47. Love’s averages are off the charts – 25.6 ppg & 13 rpg.

The Wolves are just an average team, but Love’s play isn’t the reason for their mediocrity.

Boogie Cousins' maturity may be questionable at times, but his play so far this season is not. Cousins has been a bright spot for the struggling Kings all year - not only does he have the highest usage rate among active players at 31.3, but also his PER is fifth-best in the league at 27.17. Cousins averages an impressive 23 points and 11 rebounds per game.

If the Kings front office can figure out how to put a “team” around DeMarcus Cousins, they have their budding superstar waiting in the wings.

While Blake Griffin gets his fair share of criticism for his shortcomings, his game deserves a lot of praise. He has continued to develop in his fourth season into one of the best power forwards in the game and it’s not just because of his flashy dunks.

Griffin’s mid-range jumper has improved, and his free throw percentage has increased from 50 percent two seasons ago to 71 percent this season. Griffin is averaging 22 points and 10 rebounds per game.

With Chris Paul out with a shoulder injury, Blake Griffin has done a great job proving his worth by keeping the Clips afloat.

Dirk is back to looking like the Dirk of old, and the Mavs are a solid playoff-caliber team because of it. This season, Dirk has posted a 40-point game and multiple vintage Dirk performances. While his numbers aren’t as gaudy as Love or Griffin’s, his impact on the court for the Mavs is immeasurable. Dirk’s numbers are very solid at 21.3 points and 5.8 rebounds per game.

David Lee is a consistent force for the Warriors and often doesn’t get the recognition he deserves. Yes, he's already been to a pair of all-star games, but fans often forget about Lee when discussing the best power forwards in the league.

You can pencil Lee in for a double-double almost every night, as he averages 19.3 points and 9.9 rebounds per game.