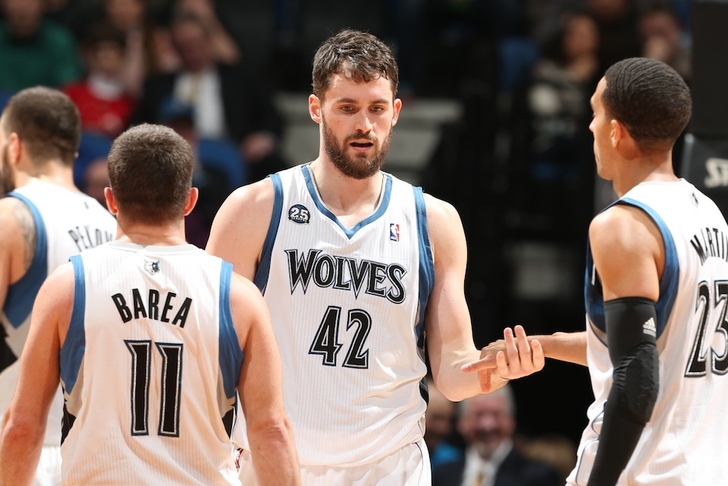 Minnesota was gunning for the postseason in 2013-14 with point guard Ricky Rubio fully recovered from a Torn ACL, but the results weren't what the franchise wanted. All-Star Kevin Love put up the numbers we've come to expect from him (26.1 ppg, 12.5 rpg), but the rest of the team wasn't up to par.

Rubio averaged under 10 ppg and hasn't been able to raise is awful shooting percentage, and Shabazz Muhammad, the highest selected of their first round picks, was not as good as advertised. The Timberwolves weren't far off - as shown by their +3.2 point differential per game, good for ninth in the NBA - but were a terrible 2-12 in games decided by four points or less.

Now, things seem to be falling apart in Minnesota. Head coach Rick Adelman decided to walk away and, because they weren't able to find a viable replacement, Flip Saunders is coming down from the front office to be the coach. To make matters much, much worse, Love has said he will exercise his opt-out clause following the 2014-15 season that would make him a free agent if he isn't traded to a contender before then.

Minnesota has said they don't plan on trading Love, so this draft will be crucial in adding pieces to get the Wolves to the playoffs for the first time in his career.

The Timberwolves' biggest needs are for a small forward and for outside shooting, and Kentucky's James Young fills both. He showed he's a team-first guy with the Wildcats, and he has the offensive talent to be a dynamic wing player for a long time with the Wolves. Young also has the potential to be a good defender when he's committed.

Another option could be Rodney Hood from Duke who's a bit more of a playmaker, but isn't as good on the defensive end and doesn't have the ceiling Young does. Minnesota may also look for insurance at power forward for when Love does leave with Michigan State's Adreian Payne.

This will probably be where Minnesota looks to develop some guys for a year in hopes of replacing Love. LSU's Johnny O'Bryant and Florida's Patric Young are big bruisers down low, but wouldn't be good complements to current big men Nikola Pekovic and Gorgui Dieng. They'd love if Mitch McGary fell to them - though he probably won't - so I'd look for them to go in the direction of Isaiah Austin, a seven-footer from Baylor who can play out on the perimeter.

There are a couple of good options at backup point guard in this spot, and the Timberwolves need someone who can come off the bench and put points up quickly. It would be an ideal fit for Russ Smith or Jahii Carson, both of whom are smaller but don't need any time to get hot. They'd give Minnesota a different option behind Rubio.

Now the Wolves will probably look for guys with upside, as very little players picked this low in the draft ever make NBA rosters. Damien Inglis from French Guiana is a 19-year-old small forward with an pro-ready body (6'8", 240 lbs), but could still use some time to develop overseas. Syracuse's C.J. Fair would also be an option to provide immediate insurance at small forward, though he doesn't have a lot of room for his game to improve.

Who should the T-Wolves pick? Is there any way they can keep Kevin Love? Will a good draft do anything to help? Tweet your thoughts to @brauf33.