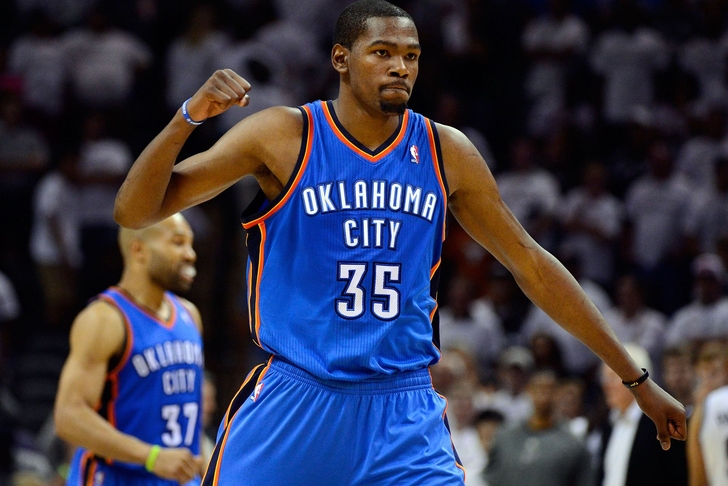 As the 2013-14 NBA season reaches its midway point, there are plenty of players worthy of awards consideration. Guys like Kevin Durant, Paul George and LaMarcus Aldridge have made significant improvements to their respective games while propelling their teams to the top of their conferences. LeBron James continues his dominance, while players like Goran Dragic, John Wall, Lance Stephenson and Damian Lillard have developed to the point where national recognition is necessary.

With that said, let’s see who’s worthy of the major NBA awards at the midway point.

Jamal Crawford epitomizes what every team wants in a sixth man - someone who comes off the bench and gets buckets. Averaging 18 points per game, the Clippers have benefited from the 33-year-old gunner’s production off the bench as well as his veteran leadership. While Chris Paul’s been out with a shoulder injury, Crawford has lifted his play and allowed the Clippers to continue stacking up wins.

Rookie of the Year – Michael Carter-Williams

The 11th pick in the draft looks like a complete steal for the 76ers so far this season. Not only has MCW been the best rookie, but his play has been stellar compared to other point guards in the NBA. MCW is a triple-double waiting to happen, and he has immense upside. The Syracuse product is already averaging a cool 17 points, 6 assists and 5 boards per game in his rookie year. While other rookies like Victor Oladipo and Tim Hardaway Jr. are having solid campaigns as well, MCW is the clear winner here.

Coach of the Year – Jeff Hornacek

Before the season began, most expected the Suns to be one of the worst teams in the NBA - basically the Orlando Magic of the Western Conference. With the additions of Eric Bledsoe, Miles Plumlee, Gerald Green and rookie Alex Len in the offseason, the Suns have quickly become one of the more entertaining teams in the league. More importantly, they're winning games, and coach Hornacek is the reason.

The Suns are 10 games over .500 at 29-19, good for 6th in the rugged Western Conference. Hornacek has completely resurrected the career of Gerald Green by giving him the green light to shoot and play freely, which many coaches would be very reluctant to do. Goran Dragic is having an all-star caliber season in Hornacek’s uptempo offense. Even without Eric Bledsoe, Hornacek has his team playing great ball, winning seven of their last 10 games. The Coach of the Year award will ultimately come down to Terry Stotts, Frank Vogel, Scott Brooks and Jeff Hornacek. At the midway point, Hornacek should be considered the favorite to take home this award.

Roy Hibbert is the clear-cut favorite for the Defensive Player of the Year award as the anchor of the NBA’s best defense. The Pacers allow a league-low 90.2 points per game, and Hibbert is constantly making it difficult for opponents to score near the rim. The last line of defense for Indiana, Hibbert is tied for second in the league with 2.49 blocks per game, but his impact on the game doesn’t always show up on the stat sheet.

The Most Improved Player award is especially tough to decide this season. Players like John Wall, Paul George, Goran Dragic, DeMarcus Cousins and even Terrence Jones have all gotten significantly better since last season, and are worthy of consideration for MIP. However, Lance Stephenson is undeniably deserving of this award at the midway point.

Born Ready’s averages are up across the board.

In addition to these significant statistical bumps, Stephenson is shooting better from the field and beyond the arc than he was last season. Unless Stephenson lets his all-star snub hurt his play, he’ll take home the MIP award at the end of the year.

The MVP award is clearly Kevin Durant’s award to lose. KD is playing at a historically impressive rate, and without Russell Westbrook in the lineup, KD has taken the league by storm. His resume keeps growing, with a 54-point performance against Golden State and multiple 40-plus and 30-plus games over the last month.

The Thunder have the best record in the West (39-11) with impressive wins over the Warriors, Blazers, Heat, Spurs and Grizzlies. With a league leading PER of 31.09 and superb averages (31 ppg, 5.3 apg, 7.6 rpg), Durant is on a level of his own right now. KD should win this award this season, with LeBron James and LaMarcus Aldridge a distant second and third.

Just when you think the Knicks are going to turn things around, they go on a losing streak or lose a game they have no business losing. Losers of four of their last six, the Knicks are just a mess.

With a record 10 games under .500 at 19-29, the Knicks' disappointing season is unlikely to improve any time soon, as they play the Blazers, Nuggets and Thunder within the next week. Their hopes of making the playoffs in the putrid Eastern Conference are slowly slipping away, and you have to feel for Carmelo Anthony as his career year is being overshadowed by his teammates' ineptitude.

Ray Felton, J.R. Smith and Iman Shumpert's lackluster play is unacceptable, and HC Mike Woodson continues to be thrown under the bus. Now, CBS is reporting Woodson could be gone by the February 20th trade deadline.

You think Melo wants to re-sign and play with this subpar group? I wouldn't bet on it.