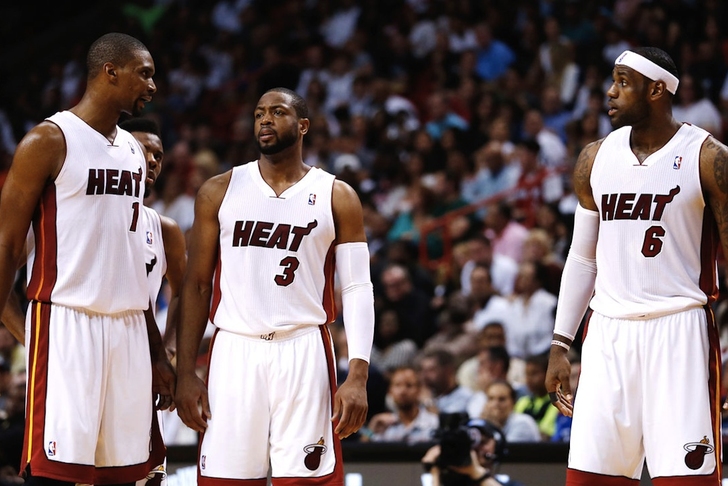 The two-time defending NBA champs took advantage of an incredibly weak Eastern Conference and cruised through the regular season as you'd expect. Head coach Erik Spoelstra used that to rest his key players - mostly Dwyane Wade - to keep them fresh for a long playoff run.

It worked as Miami walked back into the Finals for the fourth straight season without ever really being challenged before then, but the San Antonio Spurs absolutely dismantled them, sending the Heat to 2-2 in the Finals in the Big 3 era.

Now there are a ton of questions in South Beach. It's clear Miami needs to get better to compete with the best teams in the West, but LeBron James, Wade, and Chris Bosh can all opt out of their contracts if they choose. They're either going to all opt in (cap-strapping Miami), all opt out to come back for less money to bring in another superstar (aka Carmelo Anthony), or some will opt out and leave for greener pastures.

The easiest way for the Heat to improve is through the draft, and they have two picks to address those needs. Who will they take?

Mario Chalmers is a free agent and played terribly in the Finals, so it's unclear if Miami wants to bring him back. They can find a cheaper option at point guard in the draft, and that guy will be Shabazz Napier. He's a proven winner having won two titles during his time at UConn, and can do everything on the court - he led the Huskies in points, rebounds, assists, and steals in his senior year. LeBron James loves him, and he's comfortable playing off the ball - something all Miami point guards have to do a lot with Wade and James controlling the ball.

Miami could also add Michigan's Mitch McGary in an effort to end their search for a starting big man that can handle his own in the post.

Now the Heat will likely take a gamble on someone and hope they can stick on their roster. Iowa State's Melvin Ejim can play either forward position and stretch the floor, making him a good fit for the Heat's small-ball scheme. They could also take a chance on Moussa Diagne, a center from Senegal, and keep him overseas for a few years and hope he develops.

Who should the Heat pick? Will they get back to the Finals in 2015? Tweet your thoughts to @brauf33.