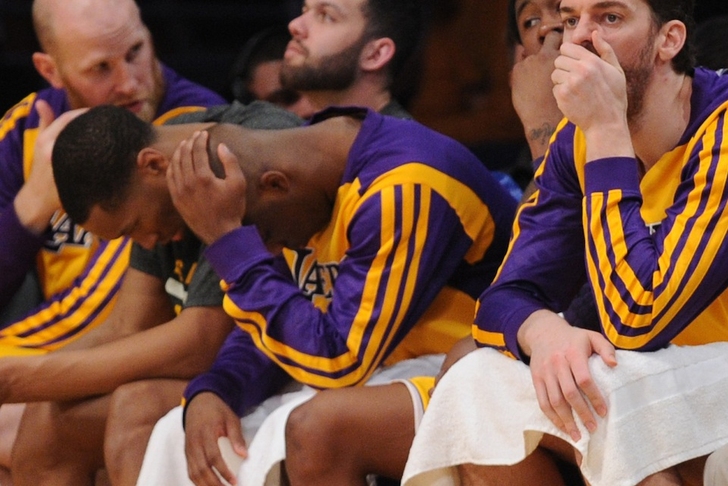 The Lakers were just an absolute train wreck this past season.

Kobe Bryant came back for only a handful of games, Steve Nash was in and out of the lineup all season, Pau Gasol was inconsistent, and the result was ugly. The compilation injuries left former head coach Mark D'Antoni (who was fired after the season) with a depleted roster full of young and experienced players who quite frankly weren't very good.

And who can forget this gem? It's tough not having enough players to finish a game...

The good news for Laker fans is that the nightmare is finally over, and they have MAJOR flexibility for 2014-15.

They're still without a coach and have only four players under contract for next season, meaning they have a ton of cap space to try and improve their roster through free agency.

Los Angeles only has one pick in the draft, but it's the seventh overall selection. What they do with that pick will be a key factor in the long-term future of the franchise, and they could pick the next big LA star to follow Kobe.

Of the four guys left on the Laker's roster, two are point guards - yet neither is the long-term answer. Nash will probably retire after next season, and Kendall Marshall can be a solid backup option, but isn't a starter. Marcus Smart from Oklahoma State will probably be their choice.

Smart is a jack-of-all-trades that would've been the second overall pick if we would've entered the draft after his freshman year, but he chose to return to school.

It was probably a bad decision.

Not only did the Cowboys totally fall short of expectations, Smart got into a couple of incidents that have raised questions about his character. At the same time, everyone who's ever been around him praise his competitiveness and team-first mentality. His all-around game and talent level can't be questioned (18 ppg, 5.9 rpg, 4.8 apg, 2.9 spg last year) but his jump shot needs to become more consistent.

Smart has the potential to be a long-term star in Los Angeles and can be the face of the Laker franchise, not to mention he would learn a TON from Nash and Kobe.

If Los Angeles doesn't pick Smart, whoever is left of Aaron Gordon and Noah Vonleh would be their selection. Gordon is incredibly athletic with the ability to play both forward positions and has loads of potential. Vonleh is the more prototypical power forward that has the ability to shoot an outside jumper - something the Lakers have already had success with thanks to Gasol.

Who should the Lakers pick? Will they be able to co-exist with Kobe? Tweet your thoughts to @brauf33.