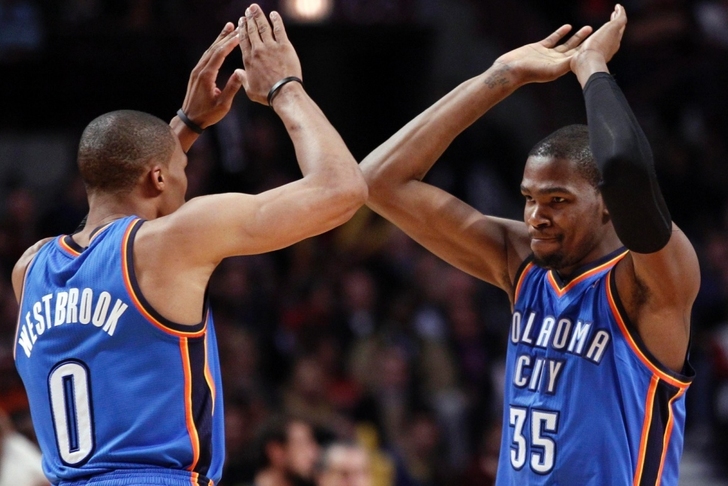 When OKC made the Finals two years ago with as young and promising of a team as they had, it seemed like a foregone conclusion that we were witnessing the start of a new dynasty.

A year later, James Harden was busy becoming the NBA's best shooting guard in a Houston Rockets uniform, Russell Westbrook missed games for the first time in his career, and the rest of the Thunder's roster got exposed. The result was a second-round exit at the hands of the Memphis Grizzlies, and doubtful questions started popping up everywhere around this franchise.

Could Kevin Durant carry a team? Is this supporting cast championship worthy? Are GM Sam Presti and the rest of the front office getting in their own way?

And now this year, all of those offseason questions have essentially been erased. Durant is running away with the MVP and is doing things we haven't seen since Michael Jordan, Westbrook finally looks healthy after dealing with various complications with his meniscus, and Jeremy Lamb and Reggie Jackson have stepped up and solidified the Thunder's bench.

Things are looking good in Oklahoma City, but it won't mean anything if they don't prove themselves in what will be a grueling Western Conference playoffs.

Much like the case with Miami and LeBron James, OKC knows exactly what they're going to get from Durant every single night. That's largely the case with Westbrook, too, but he has developed a reputation for being a wild card in the playoffs.

Here's the Westbrook dilemma: He's one of the 10 best players in the league and one of the most remarkable athletes in the NBA. He's a point guard, so the ball is in his hands a lot. And when he brings the ball up the court, he sees the guy guarding him and knows he can't defend him. So as a result, Westbrook is one of the league leaders in shot attempts each season.

But he also happens to play with the best pure scorer we have ever seen. When Westbrook shoots a lot, we wonder why he isn't giving the ball to KD more. What is even worse is when he shoots while also struggling from the field, because then he basically stagnates the entire Thunder team and it usually leads to a loss.

However, for Oklahoma City to be successful in the postseason, they need him to play like the top-10 player he is.

He's in a position no one else in NBA history has ever been in before. He has to walk that line between being a point guard and being one of the league's best players and most potent offensive threats, while still deferring to Durant.

We've been through all that—and haven't even begun to talk about his knee.

If Westbrook continues to show no ill effects from his additional surgeries, and walks that line well throughout the entire postseason, the Thunder have as good chance as anyone to win the trophy.

But if just one of those things go wrong... OKC is looking at another second-round exit.

Here's the lowdown: Oklahoma City is full of extremely talented young guys who like to push the pace. San Antonio and Memphis are old and slow, and the Grizzlies are horrendous on the offensive end. As a result, the Thunder are a combined 7-1 against these two teams.

Really, there aren't any teams you don't think the Thunder would beat in a seven-game series. Among the other top teams in the West (other than the Spurs), OKC split the season series with Portland and won their season series' with both Houston and Golden State. They have one more game left to play against LA (April 9), but the Clippers lead that season series 2-1.

This is looking like the probable second-round matchup for both teams if they take of business in the first round, so trailing the season series is some cause for concern. In saying that, both teams are very even.

No one on the Clippers can guard Durant (mostly because no one on this Earth can), but Serge Ibaka and Kendrick Perkins can't handle Blake Griffin and DeAndre Jordan down low for LA. Chris Paul and Westbrook essentially cancel each other out, leaving it up to the supporting casts to pull the series out.

Memphis fought hard for the seventh seed, only to promptly get swept by OKC. The Thunder then avoid the Clippers after Golden State pulls the upset, but Westbrook contains Curry and Oklahoma City wins in five or six games. Waiting for them in the Western Conference Finals is the Spurs, whom OKC has owned and defeats in five games. They face Indiana in the NBA Finals, who enter completely beat up from their series with Miami, and the Thunder use their up-tempo style to win the title in five or six games.

Westbrook has major problems with his knee and gets hurt, and OKC really struggles to recover. Memphis beat them without Westbrook last year, and they manage to do it again in 2014.

Oklahoma City will beat Memphis in a five-game series, even though every game will be closer than the Thunder would like. They get that matchup with the Clippers in the second round, and that'll be the second toughest series in the entire postseason behind the inevitable Indiana-Miami showdown in the Eastern Conference Finals. The OKC-LAC series will go seven games and will be determined by role players, and I trust the Clippers' depth a lot more than I do the Thunder's. Oklahoma City's front office needs a wake up call that they need to give Durant and Westbrook more talent and scoring help off the bench, and I think that'll come after they're bounced in the second round for the second straight year.

Los Angeles Clippers - Why the Clippers will win the NBA Championship